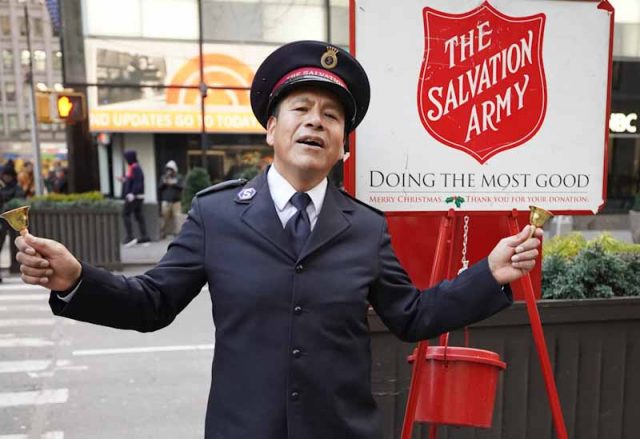 In 1891, Captain Joseph McFee saw the poor in San Francisco, California, and his heart hurt for them. No one should be hungry, he thought. Especially at Christmas time.

As a Captain in the Salvation Army, he knew his organization had a goal to preach the gospel of Jesus Christ and to meet human needs in His name. So the Captain just had to do something to help those in need. “I want to provide a Christmas dinner, free for everyone who is poor in the city,” he told himself.  That decision made Joseph’s stomach tighten like a knot. Feeding so many people, he guessed nearly 1,000, would cost a lot of money.

Joseph was not rich. Neither was the Salvation Army. How could he raise enough money to accomplish such a big task?

Night after night, Joseph laid on his bed and prayed for an answer. Then, one night he remembered something from years before when he was a sailor. He remembered a large, iron kettle that was located near Stage Landing in Liverpool, England. That kettle stood close to where the ships came in. When people would pass by, they felt a strong desire to help people who were hungry and put a coin or two inside to help feed the poor.

Joseph smiled to himself and shouted, “That’s it! I’ll use kettles!”

The next day, he found a large brass kettle. It was the perfect size. The town gave him permission to place the kettle at the Oakland Ferry landing. Joseph found the perfect spot too, near the foot of Market Street, where lots of people went by as they traveled.

Right next to the kettle, he placed a sign – “Keep the Pot Boiling. Free Christmas Dinner to Feed the Poor.” Joseph stood next to that kettle and encouraged everyone passing by to share their money and help the Salvation Army feed the poor.

Coins dropping into the kettle were like music to Joseph’s ears. So many people were willing to share their money to help others.

Soon, Joseph had all the money needed for the Salvation Army to feed the hungry. That Christmas in 1891, more than 1,000 people enjoyed a free dinner, all grateful not to be hungry on Christmas Day. Joseph knew that the Founder of Christmas, who miraculously fed 5,000 people with five fish and two loaves of bread, would be proud.

Yet, there were more hungry people in other cities in the United States who needed food, clothing, even shelter. They needed the generosity of others to help them throughout the year, and especially at Christmas. Now, Joseph had an even bigger goal.

But would the kettle idea work in other cities, too? Joseph believed it could, so he partnered with two other Salvation Army officers – William McIntyre and N.J. Lewis. Two years later, kettles helped feed the poor at 30 locations on the West Coast of the United States.

Joseph marveled how something as simple as a kettle could do so much good.

After the Christmas season of 1895, McIntyre and Lewis travelled to the East Coast where they helped the kettle idea spread to 30 more locations.

During Christmas 1897, McIntyre asked two of his fellow Salvation Army officers to help him place kettles in Boston, but they didn’t want to make spectacles of themselves. So McIntyre and his wife and sister placed three kettles in the middle of Boston. That Christmas, more than 150,000 people were fed nationwide, thanks to gifts of money clanging into kettles.

In 1900 in New York City, the red kettles were joined by a new tradition—bell ringing!

Amelia, a new Salvation Army cadet, brought a 10-cent bell with her to ring as she stood by the kettle. The ringing of her bell, and her smile, cheerful greeting and call for help, brought the spirit of Christmas giving to everyone who passed by. Soon, all cadets rang bells as they stood by their kettles.

From Thanksgiving to Christmas Eve, the red kettles and bells inspired thousands of New Yorkers to open their hearts and give to the needy. The New York World newspaper hailed the kettles as “the newest and most novel device for collecting money.” The paper also assured its readers, “There is a man in charge to see that contributions are not stolen.”

On Christmas day in 1901, kettle donations helped feed thousands of hungry people during a sit-down dinner at Madison Square Garden.

Today, red kettles and their special bell ringers are a Christmas tradition, making people smile and inspiring the generosity of millions of people throughout the world, as far away as Japan, Korea, Chile and throughout Europe. The red kettles help bring the spirit of Christmas to many who might otherwise be forgotten.

The Salvation Army red kettle is also featured in an NFL end zone. The Cowboys celebrate the Christmas Kettles during halftime at every Thanksgiving Day football game. On December 18, 2016, Dallas Cowboys running back Ezekiel Elliot celebrated scoring a touchdown against the Tampa Bay Buccaneers by playfully hopping inside a giant Salvation Army kettle, where he hid from everyone and then popped out!

Elliot got the idea when he spotted the giant kettle before the game started. “That bucket is just sitting right there by the end zone,” Elliott told reporters after the game. “So it’s only right someone jumps in it. They’re one of our biggest partners, so I had to show them a little bit of love.” Elliot then promised to make a donation to the Salvation Army, which he did. Fans responded too—with donations to the Salvation Army increasing after the game.

The silver bells and red kettles inspire people around the globe to open their hearts and give.

The Salvation Army kettles raise millions of dollars, which help more than 4,500,000 people in need each Christmas.

And it all started with a simple idea by Captain Joseph McFee, who asked himself—what can I do to help?

Robert Skead is a children’s author and part-time staff member with Athletes in Action. Discover more about his books at www.robertskead.com.