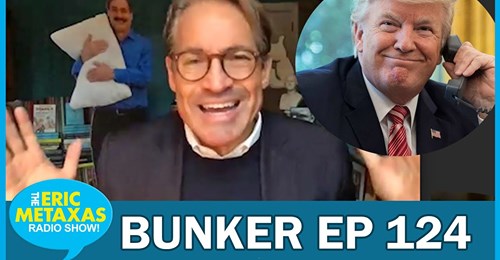 Editor’s note: The following is a transcript from The Eric Metaxas Show on WMCA on Nov. 30. Metaxas – through guest Douglas Mastriano, a Pennsylvania State Senator – was able to interview President Donald Trump for a few minutes. Previously, Metaxas had discussed the voter fraud allegations surrounding the Presidential election results in Pennsylvania.

Senator Douglas Mastriano: Hey sir (President Trump), I’m here with Eric Metaxas. He wants to know if you want any message to go out on his show today.

President Trump: Eric is fantastic, by the way. Eric, I love Eric.

Mastriano: We love him.

President Trump: Is he with you now?

Eric Metaxas: …Mr. President, I want to know. What can I do?

President Trump: Fantastic. Your whole show and your whole deal is great. Just keep it up. We’re making a lot of progress, actually.

Metaxas: We are. We are. We will not abandon this fight. This is the most horrible thing that’s ever happened in the history of our nation, and I just want to know what can I tell my audience? I’m willing to name every one of these state Senators in Pennsylvania on the air. It is disgusting to me that they do not have the courage to stand up for the nation. I guess I want to know what you think, what message we could put out to help our side.

President Trump: Well, only that we won the election. We won it by a lot. You saw the big dumps they had in the middle of the night at all the things.

President Trump: If you go back to 10 p.m. in the evening on November 3rd, that was the win. Then all of a sudden…these numbers started pouring in. This is the greatest scam in the history of our country, probably even beyond their spying on my campaign. That’s not probably. Even beyond-

Metaxas: It’s much worse. We are going to win… Jesus is with us in this fight for liberty. There was a prayer call last night. You cannot believe the prayers that are going up. This is God’s battle, even more than it is our battle. God is going to do things. We’re all going to be shocked.

President Trump: Let me tell you, so I’ll give you just a little example. The Supreme Court ruling you had the other day on churches. You are allowed to go to church, actually. That was all because of me. That was my three people who voted.

President Trump: If we don’t win this thing, we’re never going to be able to bring our country back. We’ll never be able to bring it back, and just to finish, there’s more spirit now, Eric, than I think they had at any time that I’ve ever seen it. People are angry. They’re angry in Georgia, and they’re really angry in Pennsylvania, but they happen to love Doug. Doug is the hero…Eric, we’ll get together. I think you do a fantastic job, and keep it going. Just keep it going.

Metaxas: I’d be happy to die in this fight. This is a fight for everything. God is with us. Thank you, Mr. President. God bless you.

President Trump: Yep. They stole an election, but we’re not going to, we’re just not going to let it happen.