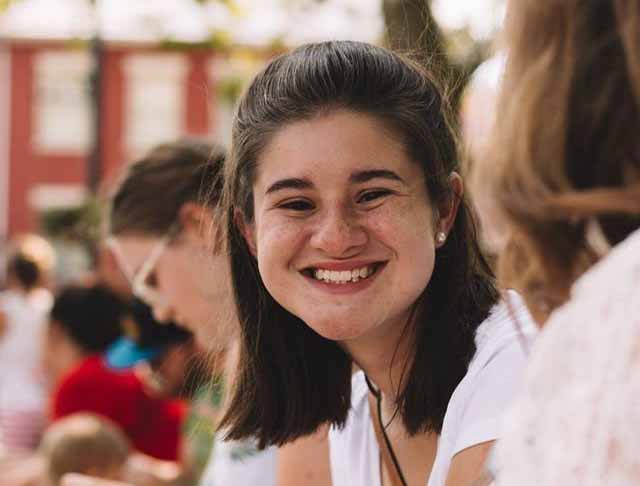 While the rural hills of southern Ohio may seem a world away from the ivory towers of Yale University, Sharla Moody ‘22 bridges the two with thoughtfulness and grace.

When she came to campus as a first-year in 2018, Moody’s transition to college life was starker than that of most Yale undergraduates. Her hometown, Gallipolis, Ohio, is nestled on the northern banks of the Ohio River, facing the shores of West Virginia to the south. Gallipolis is something of a quintessential Appalachian town, home to picturesque river valley views, a charming Main Street, and about 3,500 residents. However, having experienced a slow and steady decline in its population since the 1960s, Gallipolis faces the same trials as other Appalachian towns in contemporary American life. From this quiet, tight-knit community, Moody was thrown into a loud, heterogenous, and opulent campus.

Yet, even if unconventional, Moody’s path to Yale from small-town Ohio seems providential. In her junior year of high school, she read Hillbilly Elegy –– a memoir written by J. D. Vance, a Yale Law school graduate from a small town in Ohio similar to Moody’s. The book, lauded for its raw depiction of the cultural and economic decay faced by the rural, white working class, became a near-instant best-seller.

Moody’s English teacher encouraged her to apply to Yale –– if Vance could do it, why couldn’t she? The summer before her senior year, Moody visited New Haven and fell in love with Yale’s campus. A distant dream was starting to become a tangible reality. A wonderful writer herself, Moody compiled her application, sent in her transcript, and the rest is history.

While the hurdle of getting into Yale had been cleared, Moody faced new challenges of a less quantifiable kind: assimilating to campus life.

During first-year orientation (lovingly referred to as “Camp Yale”), Moody noted that she “was really homesick. However, she soon found other students with backgrounds similar to hers which helped ease the homesickness. Through Christian Union Lux, she was able to connect with other Christian students from rural environments. For Moody, “it was really good to have people who understood that and welcomed me immediately.”

Moody, having grown up in the church that her father went to as a child, had received much in the way of community and spiritual formation from her home congregation. She credits her Southern Methodist home church, and especially her youth group, as providing her with “a good foundation in the faith, a strong faith.” Even though she didn’t possess  “the ecclesiastical lexicon many Yalies do,” she knew connecting with Christian community on campus would be an important way to feel grounded in her new home.

For Moody, part of the challenge of transitioning to life at Yale was the novelty of it all. Neither of her parents went to college –– her older brother was the first in the family to attend. But even though her parents never received a robust education themselves, they recognized its importance, doing their utmost to ensure that their children would have the opportunities they did not.

Moody noted that her parents, like her community at large, understood college as a way to get ahead –– a way to gain financial security and social stability. While this is undeniably true, her peers and professors at Yale were telling her a different story –– that perhaps education, particularly in the humanities, can be its own end, rather than a means to some other end.

As a prospective English major, Moody dove into humanities courses her first year on campus. Through these learned forums, she became exposed to philosophies of education which varied greatly from the one she had inherited. “Coming here, seeing how different people view education as a good in itself, education for education’s sake, and not for some future self’s prosperity, has been really interesting.” Moody was inspired by the passion her fellow students had for their work, a legitimate love for their course material.

In her own academic pursuits, Moody loves to analyze how literature, art, and faith inform each other. She maintains a special love for authors like Flannery O’Connor and Emily Dickinson, who had a knack for infusing their work with spiritual weight.

While it is wonderful to be granted the time and opportunity to engage with these texts, Moody has acknowledged that it is simultaneously a luxury that very few can enjoy. This separation of knowledge from utility, and the resulting combination of knowledge and exclusivity, has caused Moody to think deeply about different orientations towards education. It is an absolute blessing to go to Yale, yet, with a gift so great, how is one to give back? What is a Yale degree for, really?

Moody recently published an op-ed in the Yale Daily News on this topic, titled “What’s the point of a Yale education?” A burgeoning writer at  the Yale Daily News, she hopes to explore paths in writing, journalism, or education as potential vocations after college. Other than her work for the campus daily, Moody is an Assistant Bible Course Leader for Christian Union at Yale; a member of the Federalist Party, a debating society within the Yale Political Union; and a staff writer for Logos: Yale’s Journal of Christian Thought.

Moody is still seeking to understand how she fits into the tapestry of Yale and how she should spend her undergraduate years. While she has made a home for herself on campus, her Appalachian roots remain fresh in her mind. Moody confessed, “I feel like I don’t really fit in either place now.”

But she remains graceful and hopeful through the change. Where the campus does not, her faith provides direction. “Looking at what Yale does offer, not only in the name, but in the time I have here, I want to use it to serve God in a greater capacity.” From the banks of the Ohio River to the steeples of New Haven, Moody’s faith will continue to guide her journey between these two worlds.