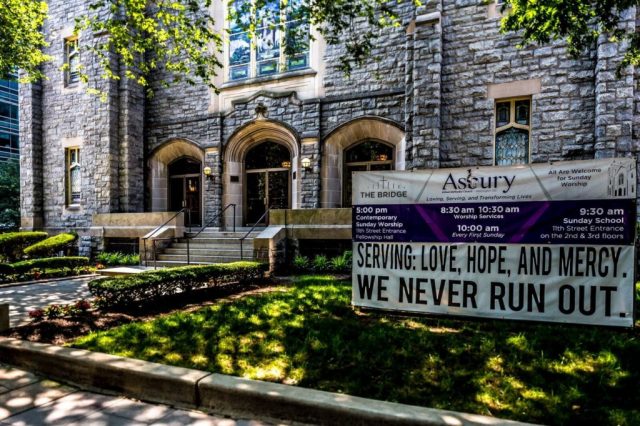 Photo from website of Asbury Methodist Church in Washington, D.C.

The National Association of Evangelicals (NAE) has condemned the recent destruction of property outside historic Black churches in Washington, D.C., and “stands in solidarity with their leaders and members to combat attitudes and systems that perpetuate racism.”

According to the Associated Press, following a pro-Trump rally in the city, “people reportedly affiliated with the hate group Proud Boys tore down Black Lives Matter signs belonging to churches in Washington Dec. 12, setting at least one aflame.”

“Words fail to communicate the anguish we feel for our brothers and sisters in Christ,” said Walter Kim, NAE president. “No church should see its signs or banners burned in a video online. The recurring trauma experienced by African Americans in this country is heart breaking. Not even their church buildings are exempt from harm.”

In a video posted to Twitter, a group of people can be seen tearing down a Black Lives Matter sign — which bears the logo of Asbury United Methodist Church, a historically Black congregation founded in 1836 — and setting it on fire.

“It pained me especially to see our name, Asbury, in flames. For me it was reminiscent of cross burnings,” said Ianther M. Mills, pastor of Asbury United Methodist Church, in a statement. “We had been so confident that no one would ever vandalize the church, but it has happened.”

The NAE has long condemned the racially motivated vandalism and burning of church buildings used by African American congregations as a particularly heinous crime. In 1996, following a spate of church burnings, the NAE established a fund that assisted with the rebuilding of some of those worship facilities.

The NAE’s “For the Health of the Nation” resource states:

Those who are racist or racially indifferent remain trapped in a false sense of self and others, blinding them to the sense of community that democracy requires. The nation will flourish when people of all races and ethnicities are able to contribute equally to society.

Evangelicals believe that the good news of Jesus Christ has the power to break down racial and ethnic barriers (Ephesians 2:14–18). Racism should not only be addressed after tragic events, but regularly in our communities of faith. Churches in the United States have an opportunity to lead the way in combatting attitudes and systems that perpetuate racism. The NAE also encourages Christians to remember their roles as representatives of Christ and peacemakers in the world, especially during this season of Advent.