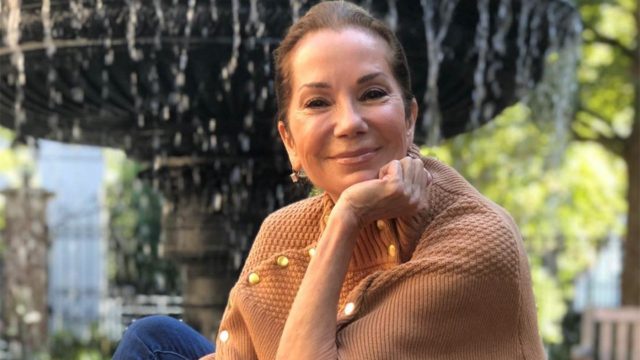 This article was reprinted with permission from www.movieguide.org, a family, biblical guide to movies and entertainment.

Kathie Lee Gifford, 67, shared how her faith in God allowed her to persevere through difficult times, appreciate the joyous times, and ultimately trust God with her future.

The former TODAY co-host released a new book titled, “It’s Never Too Late.” In her latest release, Gifford reflected on her life’s many ups and downs and how God sustained her through it all.

“I just trust in God. I get up every morning knowing that He has something new and fresh for me. And I just try to be faithful to it. And that has brought me down an incredibly adventurous journey that I’m still on,” Gifford told Fox News in a very in-depth, faith-filled interview.

Movieguide® gave Gifford the Visionary Award at its 2020 Movieguide® Awards Gala and Report to the Entertainment Industry.

“It’s never too late, first of all, to grab God’s hand,” Gifford told Fox. “No matter how old you are, no matter how much rheumatoid arthritis you’ve got in that hand, you can reach onto God at any time in any way, because He is there. If you’ve already believed in Him in your lifetime, you can draw closer to Him and you can start trusting more. You can start memorizing scripture that feeds your soul.”

Despite Gifford’s long and successful career in broadcast television and entertainment, Gifford said she has no intention to retire.

Gifford said that her relationship with God affects every aspect of her life.

“The Bible is very clear about what our relationship with God is supposed to be. It doesn’t say once a week I want you to go and visit me for an hour. Or on Easter Sunday or on Christmas Eve, that’ll be enough,” Gifford explained. “No, the Bible says in Acts, it says, ‘In Him, we live and move and have our being.’…When we seek a relationship with the living God, it will absolutely transform every aspect of your life.”

Gifford, who has had two marriages, talked about the challenges she faced during her first marriage with composer Paul Johnson in her new book. The marriage lasted from 1976 until 1983, and Gifford recalls it as a dark time in her journey.

“I just wanted to highlight a season in my life that was a season of despair,” Gifford recalled. “I’m sitting here and looking into my writing room. And there are four Emmys sitting there. Sometimes people only see the Emmys. They don’t see the hard work it took to get there or all the years of struggle.”

Gifford continued: “I still don’t blame him for anything. I still pray for him often. And if I ran into him today, I’d give him a big hug. I shared my story so people will understand this has been a great life, but it hasn’t always been easy.”

Gifford went on to wed Frank Gifford, a football star-turned-broadcaster, in 1986. They remained together until his death in 2015 at age 84.

Gifford said that God was the foundation of their marriage and allowed their relationship to preserve.

“He’s the answer to every one of life’s problems. Every one of life’s issues begins and ends with Him. I wake up every single morning and I have a choice. I can choose to follow God and trust in Him with my life and all things, all ways. Or, I can foolishly believe that I can do a better job of doing my life than He can,” Gifford said. “And I choose [God]. Every day, I have a choice to make, and I try to make that same choice every day.”

Gifford said that her faith encourages her to pray for people who do not have a relationship with God.

“I am far from perfect, but I have enough experience in trusting God in my life that I know how utterly foolish I would be to think that something was going to be better to me and love me more and forgive me more than just walking with God does…” Gifford said. “I’m always flabbergasted by people that don’t want God in their lives. I just pray for them because I can’t imagine a moment of my life without Him, much less in my lifetime.”

Gifford said that she does not fear the future because of the assurance she has in Jesus.

“When I held my husband in my arms and all the life was drained from him, I saw that look on his face and I knew that he’d seen Jesus and Jesus had taken his breath away. I wrote a song with my friend Brett James about it… It brought a lot of peace to people because they think that death is the end. And if you’re a believer in Jesus and His promises, it’s the beginning. It’s just the beginning,” Gifford said.

“Some people think you’re crazy to say this, but the best day in a believer’s life is the day that they go home to actually be with Him. That’s the best day. That’s the reward,” Gifford continued. “And if people really believe that, they don’t fear death. You may fear your suffering, you may fear loneliness. You may feel certain things, but I don’t fear anything. I fear being separated from God. And He’s told me in His word that that’s impossible… So I live my life with that assurance, every single moment of it.”