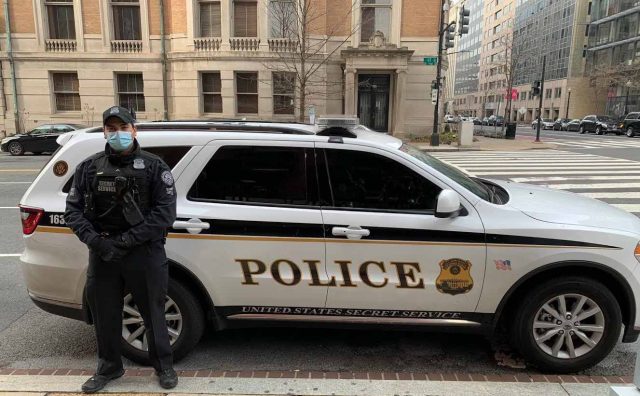 Like many boys, Josh Mas grew up playing cops and robbers with his brother, Jonathan, and a neighborhood friend, Alex. Josh loved to be the cop, chasing down the bad guys and saving the day. Whereas many kids find other interests as they grow up, Josh could only imagine himself having a career in law enforcement.

“There is no other career for me,” he said to himself after seeing a friend’s father come to their middle school on his police motorcycle.

Mas’ boyhood dreams continued to evolve and he remained resolute in his desire to protect and serve. Today, this Eastern Christian Alumni serves as an officer of the Uniformed Patrol Division in the United States Secret Service in Washington, D.C.

Mas was offered the job as a Secret Service officer in October of 2016. Previously, he received several employment offers, including the Supreme Court of the United States Police and the Pennsylvania State Police.

“I remember the moment I received the call,” Mas said about the Secret Service job offer. “I was picking up sushi to-go in Wayne, and I almost dropped that sushi then and there!”

“The joy I experienced that day overpowered any worry of being distant from my loved ones. The memory only comes second to my wedding day.”

After learning about the many possible opportunities at the Uniformed Division, from being a canine handler to being part of a counter-sniper team, as well as the opportunities to travel in and out of the country, Mas committed to becoming a uniformed officer at the Secret Service.

“The experience I could gain and the experiences to be had in the Secret Service far surpassed my other prospective employers,” he said.

Mas starts his day early in the morning with a roll call like most police departments. After the roll call, Josh patrols the streets around the White House, either on a mountain bike (preferred) or in a marked police cruiser. He strives to provide the best physical security for the First Family and others who are arriving and departing the White House complex. He can also enforce the same law regular police officers do in Washington D.C.

As one who serves and protects around the White House, Mas appreciates how Eastern Christian School provided a good foundation and has helped shape his journey.

“Eastern Christian instilled in me the importance of being a servant leader,” he said.

Mas recalled an EC mission trip to Honduras in 2010, where he worked on a team that painted the Casa Cielo Orphanage in La Ceiba, and organized community events in the village such as puppet shows, food-outreach, soccer games, and a delousing clinic.

“The challenges that I undertook as a tenth grader taught me about teamwork and responsibility. I realized that I could make a difference serving people and that I could help lead others to work together to successfully complete tasks,” he said.

Josh adds, “I owe the public and the Executive Office of the President to separate personal biases from my career. When I graduated from Secret Service training in June of 2017, I took an oath to protect and defend the Constitution.”