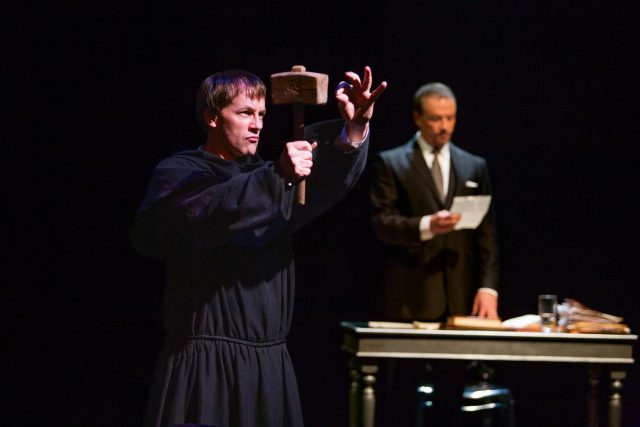 Photo: A scene from ‘Martin Luther on Trial’ during its run in theatres.

“After a successful New York premiere, Martin Luther on Trial toured the country in 2017 and 2018,” said FPA Founder and Artistic Director Max McLean, who co-authored the play. “No FPA production has generated more audience excitement. While theatres remain closed for the foreseeable future, this virtual presentation brings to life all the drama and wit that engaged our audiences.”

The action takes place in an afterlife trial for the soul of Martin Luther . . . at Lucifer’s request. This fantastical courtroom drama features Hitler, Freud, MLK Jr and Pope Francis as witnesses, a reenactment of Satan’s rebellion and his failed attempt to enlist Michael the Archangel! All this along with a thorough examination of Luther’s life and his loving relationship with Katie Von Bora.

The recorded presentation benefits Fellowship for Performing Arts and can be accessed anytime Jan. 31 through Feb. 3 with registration. Visit FPATheatre.com to Access the Virtual Production.

Martin Luther is among history’s most complex characters. His Ninety-Five Theses, nailed to a church door in Wittenberg, Germany, split the church and opened the Bible to the masses. He also maintained many controversial positions the stir passionate debated today, more than 500 years later.

Martin Luther on Trial examines all facets of the life of the man who literally changed the world.

Christa Scott-Reed is the online director of this presentation, which is based on the original New York production directed by Michael Parva. It features Christian McTaggart as Luther, Paul Schoeffler as Lucifer, John FitzGibbon as St. Peter, Mark Boyett as St. Paul, Hitler and others, Jamil A.C. Mangan as MLK and Kersti Bryan as Katie Von Bora.

In the wake of theatre closures, where FPA has seen 27 performances canceled so far, the organization has pivoted to streaming content to continue creating and producing engaging theatre and special events. In June, FPA produced a live discussion with author and social critic Os Guinness, Life in the Post-Pandemic World, that over 400 people watch live and another 600 watched recorded. The virtual presentation of Martin Luther on Trial is the follow-on event with more to come.

FPA expresses its gratitude to the performers’ unions through Theatre Authority Inc. for their cooperation in permitting the artists to appear on this program: ACTORS’ EQUITY ASSOCIATION, AMERICAN GUILD OF MUSICAL ARTISTS, AMERICAN GUILD OF VARIETY ARTISTS, and SAG-AFTRA.