After five years in the New York Mets’ minor league system, Tim Tebow has hung up his cleats.

Tebow, the former Denver Broncos quarterback famous for praying on the field, or “Tebowing” as it was known, announced his retirement from professional baseball on Twitter Wednesday.

“I want to thank the Mets, [Mets President Sandy] Alderson, the fans, and all my teammates for the chance to be a part of such a great organization,” Tebow said in a statement released by the Mets and reported by ESPN Wednesday. “I loved every minute of the journey, but at this time I feel called in other directions.”

Tebow, a devout Christian, played three years in the NFL with the Broncos and Jets after winning college football’s Heisman Trophy in 2007. He led the Broncos to a thrilling overtime playoff victory against the Pittsburg Steelers in 2011.

Tebow returned to baseball in 2016 (he played in high school) and reached the Triple-A level of the minor leagues. He is a football analyst for ESPN’s SEC Network.

Tebow expressed his gratitude for “everyone’s support” of his “awesome journey in baseball,” noting that he never wants to be partially in on anything.

“I always want to be 100 percent in on whatever I choose,” Tebow said on Twitter.

Off the playing field, Tebow is known for his all-in commitment to charitable work. Through his foundation’s international Night To Shine event, Tebow helps children and adults with special needs fell like kings and queens. Dozens of Metro New York churches participated in the event in 2020, which was held virtually and as a drive-thru event due to the global coronavirus pandemic. 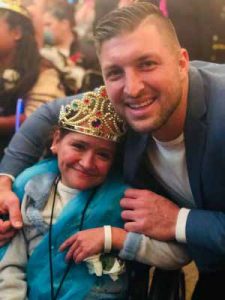 “It is awe inspiring to see how God is using the Church globally to stand up and advocate for people with special needs. I truly believe that the world is coming together through Night To Shine to celebrate the love that God has for us,” Tebow previously said.

As for his baseball career, Tebow Tweeted that he will “always cherish his time with the Mets.” He batted .222 with 18 homeruns and 109 RBI in four minor league seasons.