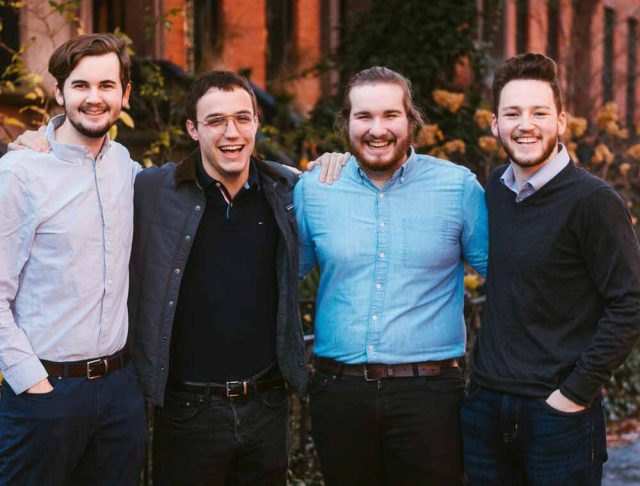 NEW YORK — At the end of 2020, Apostles Brooklyn’s Pastor Derek Devine preached a sermon series called “Following Jesus in Polarizing Times” focused on the book of Philippians. He  emphasized the need for love, unity and restoration amid polarized American politics, the COVID-19 pandemic, racial divides and an epidemic of loneliness, pointing to the small non-denominational church as a mechanism to bring hope and solutions, to bring Jesus himself.

In the Bible, Paul is able to be joyful while imprisoned because he is looking at the kingdom of God rather than his chains, Derek said. In the same way, New Yorkers can be joyful while isolated in quarantine when they focus on God. Still, the church acknowledges this is incredibly difficult without meeting people in person. So some members have innovated small groups to watch the Sunday services at apartments in pods of 10 or fewer people.

“When Apostles went online in mid-March, Pastor Derek recorded from his basement, and people led worship acoustic-style from their living rooms,” said Graeme Straughn, one of the Sunday service hosts and a sophomore at The King’s College, an evangelical college in Manhattan. “The effort was clearly being put in, but you can’t do church over Youtube.”

At the beginning of the fall semester, Straughn decided to invite others from his college to watch church with him. Pretty soon, his three roommates also joined the Apostles watch-party in their living room, and the Straughn branch of Apostles Brooklyn was born.

“Hosting church in our apartment seemed like the natural progression of doing church when moving back to the city—you can’t have church over Zoom,” Straughn said. “I didn’t feel like I was really starting anything because it just made so much sense.”

Straughn represents a national trend: one in three Christians stopped watching church online in the early months of the pandemic, and half were Millennial Christians, according to Barna Group, an evangelical polling firm. One in five young Christians said they were feeling lonely “all the time” and 19% of 18-35-year-olds said friends are missing from their worship communities. And while Gen Z Americans like Straughn are “digital natives” having grown up with screens, the majority also feels bad about the amount of time they spend on digital devices and prefer in-person gatherings, Barna reports.

Straughn doesn’t lead his group alone. This apartment is fortunate enough to have an in-person worship leader, Brent Buterbaugh, who also lives there. After the sermon ends, Buterbaugh will take out his acoustic guitar and lead the others in worship songs while Straughn clicks “next” on the slideshow of lyrics. Apostles still streams worship services each Sunday, led by worship director, David Han, but both Graeme and Brent felt it was better to worship in-house.

“I felt like it would be a better and more engaging experience for all,” Buterbaugh said. “The online worship was pretty lackluster.”

Before Buterbaugh led worship, the church watchers wouldn’t sing along to the worship music streamed online. It felt awkward.

When the group was hanging out in the apartment after a service one Sunday, someone entertained the rest by playing Don McLean’s “American Pie,” borrowing Buterbaugh’s guitar. This inspired Buterbaugh and Straughn to attempt the same thing but with worship music. The next Sunday Buterbaugh asked the others which worship songs they wanted to sing, then everyone found the lyrics on their phones and sang together. This evolved into Buterbaugh and Straughn choosing a setlist beforehand, and then into its final form where they display the songs’ lyrics on the TV for all to follow along.

The crepe breakfast provided during the “social time” to all church goers. Photo courtesy of Brent Buterbaugh.

A typical service at the Straughn branch of Apostles Brooklyn will start at 10 a.m. with a crepe and coffee breakfast—coffee by Straughn and crepes by Buterbaugh. Breakfast and social time lasts until 11 a.m. or so (being late to a service matters less when one can pause and rewind) and then the group will watch the sermon on the TV in the living room. After the sermon has ended, Buterbaugh leads the worship session, then prayer.

Prayer is popcorn-style—everyone may give prayer requests and then others volunteer to pray for the requests—and then Straughn will close out with a general prayer. After the service, members will often linger in the apartment to socialize.

The group is a mix of old and new friends as others are invited, but like a house party that grows word-of-mouth, the biggest challenge has been keeping the gathering small in accordance with the state and local guidelines.

“Having to manage a guest list is never fun,” Buterbaugh said. “It seems completely wrong for a church since its goal should be to build and grow. Instead, we’re having to deal with who will be allowed to come every week and it’s not a fun conversation.”

As the members arrive, their masks quickly come off to make way for coffee, crepes, and conversation. They usually stay off throughout the service and are only donned again as people say their goodbyes.

In order to reach more people, sometimes other members would be asked to sit out for a Sunday. These members will typically watch the service from their own apartment or will gather together in another member’s apartment. They jokingly call themselves “exiles” or “outcasts” on these Sundays, as they meet in an “off-brand” apartment instead of the usual one.

Despite these inconveniences, the Straughn house group has brought many to the church who hadn’t come before. Buterbaugh previously attended Resurrection Williamsburg, but decided to join the group in his apartment rather than watch Resurrection’s service in his room separately. The other roommates made a similar decision and stopped watching their church services online for the group church experience in their living room.

The other regular attendees of the Straughn branch also used to attend other churches and switched due to their dislike of online services. Many were excited to have a church experience with people they see and interact with on a regular basis. All who come agree that going to church with a community is better than watching it alone.

“I felt I never went to church until I did it at Graeme’s apartment,” Ann Marie Hogan, a college student, said. “Just going and interacting with people on Sundays and then never seeing them throughout the week didn’t feel complete. Church isn’t supposed to be a moral filler we get once a week, but a community that we live with.”

The tragedy of this edifying twist on churchgoing during a socially isolating pandemic is that, inevitably, people will be left out. Holly Peterman, who heard about the Apostles house group from her roommate, was invited one week when Buterbaugh was out of town, but has since been unable to rejoin the group. She is understanding of the difficulties the leaders are facing in managing a guest list during the pandemic. Peterman now floats between watching a sermon from her hometown church, from Redeemer Presbyterian, or an archived sermon from Redeemer’s founder Tim Keller on Sundays.

Straughn is currently considering branching out and asking others to host church in their apartments also. Whether this becomes overflow seating for the Straughn branch, a whole new house group for Apostles Brooklyn, or even another group for another church matters little for Straughn, so long as those isolated by COVID-19 can find community.

David Hancock is a student at The King’s College studying Politics, Philosophy and Economics.