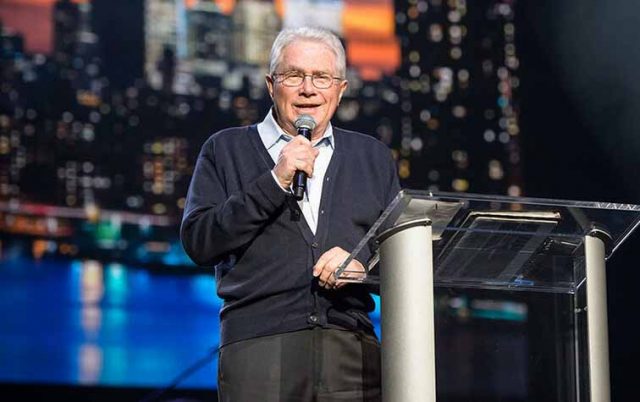 Levi Park, the Luis Palau Association’s point man for New York CityFest in 2015, recalled a moment that “rocked his world” during that historic outreach campaign.

Park and Luis Palau were travelling by car to an appointment when the renowned evangelist asked him a question he will never forget.

“Interview requests were flowing in and we were ending over one hundred events all around the Tri-State area with a night in Times Square, a night at Radio City, and the grand finale at Central Park,” recalled Park.

“He turned and said, ‘Levi, I have a question for you.’ I thought he was going to ask me about the upcoming interview with the New York Times or what my thoughts were on the message he had prepared. The question he asked inspires, haunts, and refocuses me every day. He asked, “Levi, do you tremble at the word of God?”

When Palau passed away on Wednesday, March 11, after a three-year battle with stage IV lung cancer, Christian leaders from around the globe paid tribute to the evangelist who preached the Word of God to more than 1 billion people through television, radio, print, and live events. Luis Palau, who died at his home in Portland, Oregon, was 86.

For more than 65 years, he “played an influential role in Christian missions and worldwide evangelism as a powerful speaker, teacher, and author. His work took him to more than 80 nations,” according to his obituary.

Park, the Luis Palau Association’s Regional International Director, called Palau a friend, mentor and spiritual father and shared his New York story on a memorial page at www.palau.org. On that page and on social media, several New York City pastors and ministry leaders also paid tribute, especially remembering how the evangelist came to their city in 2015 to bring Good News to the region.

In addition to large events in Central Park and Times Square, CityFest also established New York CityServe and New Jersey CityServe, collaborations that continued beyond 2015. The Palau Association worked alongside local ministries to proclaim the gospel through acts of love and service to the poor, marginalized, addicted, and victims of human trafficking.

“Unity is absolutely vital,” he said. “The biggest scandal of Christianity is our division. We all profess to love Jesus. We may have minor differences, but there is only one Church. We don’t have to agree on everything, only the foundational truths found in the Apostles Creed…When there is unity, the world pays attention. And they believe that Jesus is the one sent by God.”

In 2015, Pastor Rick Del Rio said CityServe “brought us to a new level in relation to unity,” he said. “It created a movement. A team effort. The focus is on Jesus, saving souls, and serving.”

On March 11 on Facebook, Pastor Del Rio said, “I am so honored and grateful to have had the privilege of driving Luis Palau, his family and his team during their visits to New York. Thank you Luis for always have a kind and encouraging word…Thank you for your faithfulness to the call. We’ll see you in glory…”

“Is a rare gift to meet leaders, let alone icons, whose private humility matches their public persona. Luis Palau was such an icon. I’m eternally grateful for the privilege of meeting him, loving his sons, and serving his vision for @nycityserve,” he said.

On Facebook, Christopher N. White, an evangelist based in New York City, said Palau “left behind an unstained testimony of loving Jesus and loving people all over the world. The Palau Festival in New York City in 2015, and especially Central Park, was an answer to years of prayer and a great blessing to thousands of people.”

‘A GREAT SERVANT OF GOD’

Carlton Brown, senior pastor of Bethel Gospel Assembly in Harlem, called Palau “a great servant of God” (Facebook). “It was a great joy, not only having him share the Word of God with us at Bethel but also to sit with him multiple times in small gatherings and on a one to one basis. I will always cherish those memories. My prayers go out to his family who have become friends over the years.”

Attorney Paul Michalski, who has served in various national leadership positions with the New Canaan Society, posted a tribute at palau.org.

“Luis Palau will always be a huge part of the history of the New Canaan Society,” wrote Michalski, the founder of Integrous LLC. “Not only did his appearance in 2000 catapult the group from 50 to 100 men, it also catalyzed the growth that continued (and became 60+ chapters across the US). Most importantly, his vulnerable and inspiring messages at meetings and retreats over the years have impacted the faith journeys, hearts, lives and families of countless men…”

Also on Facebook, New York City Pastor Guy Wasko wrote, “A giant in the faith has graduated from this life into the next. I had the incredible honor of knowing and working with and being prayed for by Luis Palau when their association worked in NYC and I had the privilege of serving as Executive Director of New York CityServe. Countless lives and generations of families are changed because of this man’s faithfulness and passion…What a Legacy he leaves behind.”

The legacy of Luis Palau will not soon be forgotten, in New York, in his homeland of Argentina, and across the world.

“I have no regret in pouring out my years, from the time I was a boy, for the sake of the Good News,” Palau once said. “If I was given a thousand lifetimes, I would dedicate them all to the same calling.”