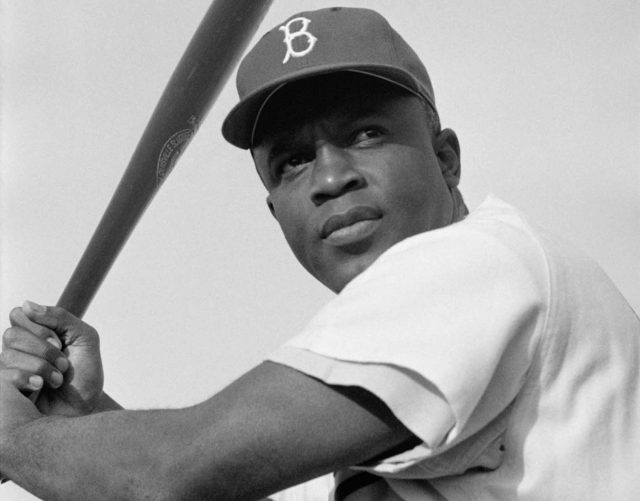 Editor’s note: The following article is reprinted with permission from the blog of author Robert Skead, of Wyckoff, NJ. Skead wrote the article in honor of Jackie Robinson Day, April 15. “I put together this story about Jackie Robinson and Branch Rickey’s great experiment,” Skead said. “Thank the Lord it worked!”

“Move to the back of the bus, NOW!” bellowed the bus driver.

Jackie Robinson had no intention of moving on the account of the color of his skin.

“Move now or I’ll cause plenty of trouble for you!”

“I don’t café if you cause me trouble,” snapped Jackie.

The bus driver shot Jackie a look and drove the bus away.

A few stops later, he darted out and returned with some other drivers. “There’s the black man that’s been causing me trouble,” he said.

“I’m warning you. Get off my back!” Jackie jumped off the bus.

Tires screeched from a jeep. Two military policemen jumped out. Jackie’s mind flashed back to his childhood.

He remembered how his white neighbors called the police complaining that his brother’s skating on the sidewalk made too much noise. The truth was they could care less about the noise—what they didn’t like was the color of his brother’s skin. It was the same reason the other kids in his neighborhood didn’t play with Jackie. The same reason adults and children called him insulting names. They even signed petitions to try and make the Robinsons leave their home.

Mom made it clear to neighbors – and our family – that she would not stand for anyone to mistreat us, Jackie thought.  Mom always made sure we were happy.

A STAR AT UCLA

Jackie was happiest when he was playing sports. In elementary school, his classmates shared their lunches with him if he played on their team at recess. Jackie loved football, basketball, track and baseball. He played them all in high school. And in 1941, at UCLA, he was the first athlete in the school’s history to play all four varsity sports in one year, and he was named to the All-American football team.

Jackie received an honorable discharge from the Army because he didn’t move to the back of that military bus. But while in the Army—he met a former player for the Kansas City Monarchs in the Negro Leagues, who encouraged him to write a letter to the team asking for a tryout.

Jackie wrote that letter. In 1945, he joined the Monarchs.

Meanwhile, in New York, the Brooklyn Dodgers’ General Manager, Branch Rickey, didn’t like the fact that black men were not allowed to play in the major leagues. He believed it was God’s will for him to do something about it.

Branch Rickey charged scout Clyde Sukeforth to search the Negro Leagues (and other countries) for a man good enough at baseball to play in the big leagues and with self control.

Then one day, Jackie got the invitation to come to Brooklyn. Upon entering Rickey’s office, Jackie had why he was there. It was August 28, 1945.

“Are you under contract to the Kansas City Monarchs?” Mr. Rickey asked.

“No, sir,” the Jackie replied. “We don’t have contracts.”

Branch Rickey toyed with his cigar. “Do you know why you were brought here?”

“I heard something about a Brooklyn-colored team,” answered Jackie. “That it?”

“No. That isn’t it. I sent for you, Jackie, because I’m interested in you as a candidate for the Brooklyn National League Club. I think you can play in the major leagues. How do you feel about it?”

“You think you could play for Montreal?” Rickey demanded.

Rickey pointed his finger at Jackie. “I know you’re a good ballplayer. What I don’t know is whether you have the guts.”

Jackie felt heat coming into his cheeks. Was this man challenging his courage? Before Jackie could answer, Rickey explained that he wasn’t just another ballplayer being hired to play. They both were playing for big stakes. Rickey’s search for the right ballplayer to break baseball’s color barrier had come down to him.

‘PITCHERS WILL THROW AT YOU’

“We can’t fight our way through this, Robinson. We’ve got no army. We can only win if we convince the world that you are a great ballplayer and a fine gentleman.” Rickey’s tone rang like a warning. “Can you do it? There will be insults. Cheap shots. Pitchers will throw at your head.”

“They’ve been throwing at my head for a long time,” Jackie replied.

Rickey’s voice grew louder. “Suppose I’m a player…in the heat of an important ball game and I collide with you at second base. When I get up, I yell, ‘You dirty, black son of a-” He finished his sentence and added coolly, “What do you do?”

Jackie licked his lips and swallowed.  “Mr. Rickey, do you want a Negro who’s afraid to fight back?”

“I want a ballplayer with guts enough not to fight back!” Rickey exclaimed. “You have to do this job with base hits and stolen bases and fielding ground balls, Jackie. Nothing else!” Rickey proposed several scenarios. What if a prejudiced clerk in a southern hotel refused him a room and cursed him in the process? What would Jackie do? What if a sportswriter crafted a negative story, full of racial hatred? What would Jackie do?  What if he was mistreated in dining rooms, hotel lobbies and railroad stations? What would Jackie do?

Rickey removed his jacket to move more freely. “Now I’m playing against you in a World Series-”

“I’m a hotheaded player. I want to win that game, so I go into you spikes first, but you don’t give ground. You stand there and you jab the ball into my ribs and the umpire yells, ‘Out!’ I flare up. All I see is your face…that black face right on top of me… So I haul off and punch you right in the cheek!” Rickey swung and barely missed Jackie’s face.

“What do you do?” Rickey grabbed a book from his desk and opened it.

Jackie read the cover, Life of Christ by Giovanni Papini.

TURNING THE OTHER CHEEK

Rickey cleared his throat. “Listen to this.” Rickey read. “Ye have heard that it hath been said, an eye for an eye, and a tooth for a tooth: But I say unto you, that ye resist not evil: But whosoever shall smite thee on thy right check, turn to him the other also. And if a man will sue thee at the law, and take away thy coat, let him have thy cloak also. And whosoever shall compel thee to go a mile, go with him twain.”

A smile washed over Rickey’s face.

Right from the start, Jackie faced trouble from fans, sports writers, his teammates and players on other teams. Catchers spat on his cleats. Pitchers threw intentionally at his head. Jackie had to learn self control.

On April 14, 1947, Jackie made his major league debut, playing first base for the Brooklyn Dodgers. He became the first player since 1880 to break the major league baseball color barrier.

“They’re waiting for you in the jungles, black boy!” shouted a Philadelphia Phillies player. The words pierced Jackie’s spirit. I’m a human being. What am I doing turning the other cheek as though I weren’t a man? I never tolerated an attack on my dignity before. I stood against prejudice in the Army. How can my talent triumph over bigotry? Forget about Rickey’s noble experiment. It won’t succeed. I’ll fight back and walk away from all this.

Jackie remembered all of Mr. Rickey’s predictions, which had come true, and how Mr. Rickey believed in him. Jackie had to make a decision.

The game continued and so did the abuse, but Jackie stayed courageous and silent.

A sportswriter later wrote that Jackie was “the only gentleman among those involved.”

Game after game, insult after insult, Jackie didn’t lose his temper. If I fight back I’ll hurt the chances of all black players who could follow me, he reminded himself.

Jackie let his bat, glove and feet do his talking. He played with passion and won the respect of players and fans throughout America…all because he had the guts enough not to fight back.

Robert Skead is a children’s author and part-time staff member with Athletes in Action. Discover more about his books at www.robertskead.com.