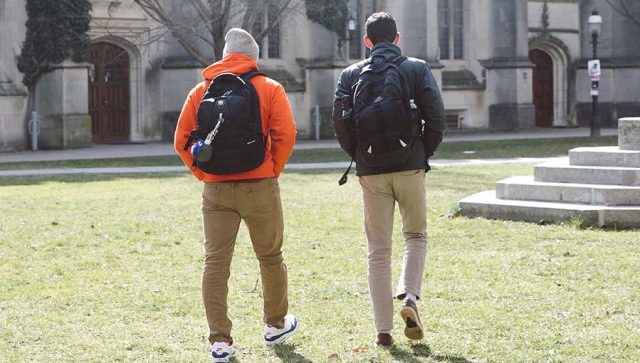 Editor’s note: The following article was reprinted with permission from Christian Union: The Magazine.

Princeton University Professors Robert P. George and Keith Whittington are among the founding members of the recently-formed Academic Freedom Alliance. The organization, which seeks to defend freedom of speech on college campuses, includes over two-hundred scholars, representing a spectrum of academic disciplines and political perspectives.

Whittington, the William Nelson Cromwell Professor of Politics at Princeton, will chair the Academic Freedom Alliance’s governing committee. The constitutional scholar is the author of Speak Freely: Why Universities Must Defend Free Speech (Princeton University Press).

George, the McCormick Professor of Jurisprudence and Director of the James Madison Program in American Ideals and Institutions at Princeton University, is also on the governing committee. He is a former chairman of the United States Commission on International Religious Freedom.

The Academic Freedom Alliance (AFA), which is non-partisan and non-political, is comprised of college and university faculty members.

“Religious freedom is central to the mission of our institutions for the pursuit of truth and knowledge,” the organization’s website states. “We have united to defend freedom of thought and speech on campuses by treating an attack on one as an attack on all.”

The AFA is committed to protecting academic freedom by “defending faculty members’ freedom of thought and expression” and providing legal support to faculty whose academic freedom “is threatened by institutions’ or officials’ violations of constitutional, statutory, contractual, or school-based rights.”

In an interview with Princetonians for Free Speech, Wittington said freedom of thought was faring reasonably well at Princeton, but noted that faculty at other universities across the country were in a much more vulnerable position.

“The freedom of faculty to raise difficult questions, express dissenting points of view, and pursue unpopular scholarly agendas is under systematic assault across the country, and in many places, university leaders are not very willing to stand up for academic freedom when doing so is costly,” he said.

The AFA notes that defense of faculty members’ academic freedom does not depend on viewpoint, nor does it endorse the content of what they express. The organization is seeking to defend its members’ right of expression.

Whittington told Princetonians for Speech that the AFA was seeking to alter the calculation of university administrators, “who might be tempted to side with the mob against a beleaguered member of the faculty.”

“When public controversies break out regarding faculty speech, professors at the heart of the controversy are often isolated and vulnerable.”

“They don’t always know their rights or how to protect them, and they are demoralized as a wave of public condemnation comes down on them. We hope to put such embattled professors in a better position to fight back and to put pressure on universities to live up to their own commitments to defend free speech and academic freedom even when doing so is hard.”

In an interview with The Chronicle for Higher Education, George also noted that the AFA was looking to send a message to university administrators regarding free speech.

To stay up to date with important articles like this one regarding freedom of speech and other issues impacting our nation’s future leaders, please subscribe to Christian Union’s newsletter. Click here.