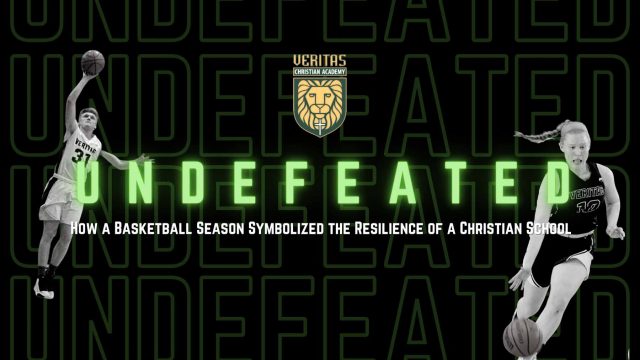 It happened two days before Thanksgiving. An email was sent to students, parents, teachers, and staff. The first COVID-19 case had hit Veritas Christian Academy.

It was a week before the first scheduled games of the basketball season and nearly three months into what had been a relatively smooth start to the school year. All of that changed in a moment.

The school would shut down and have remote learning until after Christmas break. Governor Murphy would soon issue a mandate preventing high school sports from playing until future notice. The momentum that had been built with a return to in-person classes in the fall was coming to a screeching halt.

I’m not being overly dramatic when I say that hope was waning.

As we enter the spring of 2021, it is almost impossible to recognize those moments based on what has transpired in the months that followed. As the calendar turned to 2021, and even more turmoil has occurred across our schools, our country, and seemingly everywhere you look, a different result was unfoding in the halls of Veritas Christan Academy in Sparta, NJ.

The turn of the year led to a turn of events that has propelled the small, Christian high school towards what feels like a brighter future for their students and community. They decided they would not be defeated by the circumstances that surrounded them. In fact, they would push even harder to overcome them.

That attitude and mindset just happened to manifest itself on the hardwood.

In January, Governor Murphy lifted the high school sports ban he had imposed and soon practices and games began. With both the boys and girls teams coming off solid seasons last year, they still had to deal with losing leading scorers on both teams to graduation the prior spring. There were high expectations, but after being shut down for nearly two months without any practices or games, it would be hard to predict what was to come.

As the Veritas boys and girls teams began to play, a crazy thing happened – they refused to lose.

It started with a few games, then a tournament, then some more games. Buzzer beater blocks and fourth quarter comebacks were mixed with double digit victories. By the end of March, the Veritas boys and girls basketball teams had made their way through the Metro Christian Athletic Association (MCAA) regular season and tournament undefeated in league play. There were bumps, scares, and some close calls along the way, but through every test and trial, the teams banded together to overcome. The culminating event came at the MCAA Tournament where not only did both teams cut down the nets, but senior, Rose Hockman, ended her career by scoring her 1,000th point while senior Ethan Mulder and junior Charlotte Milanesi were named league MVPs. A triumphant end to a season that started so unexpectedly.

But this isn’t just a story about basketball. The basketball teams are symbolic of what has happened throughout every facet of Veritas Christian Academy this year. While public schools have remained virtual for the entirety of the year and other schools limit programs for students, Veritas has done just the opposite.

With the arrival of head administrator, Tom Argersinger, Veritas has added new programs for this academic year, including an outdoor leadership class, Go Leader 1, and an arts-based program called FLAME. While debates about what should be taught in science and history echo across our country, Veritas has instituted a new Bible class where students listen to the Bible being read aloud and follow it up with small group discussions. This new program will allow any incoming freshman to “read” the entire Bible over the course of their four years at Veritas.

Broadway remains dark, but live musical theatre still lives as Veritas has plans for the return of their annual spring musical with this year’s show The Lion King Jr. – a high school rendition of Disney’s iconic Broadway hit.

Instead of caving to cancel culture, Veritas refused to lose.

This is not to say everything has been easy. Certainly it hasn’t. COVID protocols remain in place and the staff is prepared to shift to virtual classes at a moment’s notice. But while our world seems riddled with fear, Veritas has made it a point to act boldly.

Future plans for the continued growth of Veritas have taken form with a focus on in-person learning while also expanding its reach to those who need a virtual option. Fundraising support has come from new places to help offer tuition assistance to families in need, and a renewed focus to forging a new generation of leaders is the foundation for the growth in the years ahead.

Matthew 22:37 reads “You shall love the Lord your God with all your heart and with all your soul and with all your mind.” The heart, soul and mind of every student is the focus of Veritas Christian Academy. It’s that north star that has propelled everyone associated with the school to go above and beyond this year.

Some may consider this school year a loss. Like our basketball teams, Veritas just refuses to accept that option, and with the Creator of heaven and earth on our side – why shouldn’t we?

David and Tara Marine are the parents of a student at Veritas Christian Academy and three other children at Northwest Christian School.