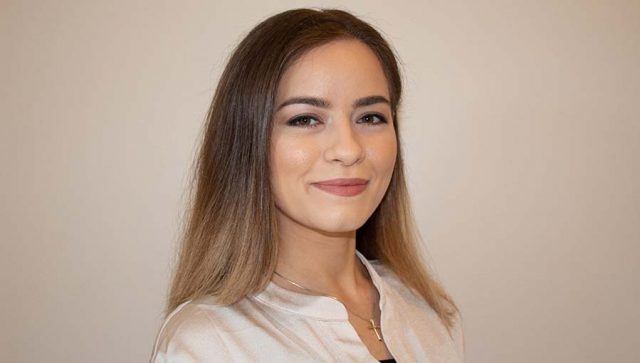 Editor’s note: This article was reprinted with permission from Christian Union: The Magazine.

Athena Sternklar wants to change the world through a career focused on international policy and humanitarian aid.

The political science major, who transferred to Columbia University in the fall, took a hiatus from college a few years back to travel abroad and volunteer in refugee camps in Greece, Serbia, and Jordan. She came to Columbia via Montgomery Community College in her hometown of Rockville, Maryland.

“I am passionate about advocating for those who are marginalized, oppressed, and unheard,” she said. “Some areas that I care deeply about are modern-day slavery, sex trafficking, and refugee’s rights.”

Sternklar noted that her hunger for the Word and prayer has increased through Christian Union Bible courses and through the speakers at Illumina (the ministry’s Leadership Lecture Series).

“At Columbia, the Lord has been teaching me about the necessity of daily prayer, Bible reading, and quality time with Him,” she said. “He reminds me over and over, that I can do nothing without Him. I must abide in Him and prayer is an act of dependency.”

Over the winter, Sternklar started a virtual, daily prayer time with CU Lumine. She knew that having a regular devotional time to read Scripture and pray is a challenge for college students, and thought seeking the Lord in community would help everyone stay connected.

“Athena suggested it as a way to start our day off strong, with the Lord and with each other,” he said.

The daily prayer meetings, which began on in December and continued when the spring semester commenced, are hosted on the Discord platform, an app that allows students to connect easily.

Thomas has also been impressed with Sternklar’s leadership within CU Lumine.

“She is a blessing,” he said. “From day one, she has been active with the ministry. Athena has led prayer times, helped organize student fellowship events, and has built a great community with her brothers and sisters at Columbia. Honesty, if you spend a few moments with her, you can sense Christ pouring out of her life.”

Although in-person classes have resumed at Columbia, some COVID-19 restrictions remain in place as social gatherings are limited to only nine people, making CU Lumine’s online prayer times and online Bible courses even more paramount. Discord’s video, text, and chat features are helping the ministry’s prayer group engage in an active, online community.

“Staying connected in genuine relationships has been vital during this pandemic,” Sternklar said. “Our use of Discord, in general and through our devotional times, has helped us to remember we’re not alone and encourage one another in our walk with Jesus. Discord allows us to do so much together, and using it for prayer and devotionals allows us to still continue fellowship with each other without necessarily having to meet up in person.”

Like Sternklar, Adiele also appreciates Christian Union’s prayer emphasis and how CU Lumine has helped unite a community of believers during the COVID-19 pandemic.

“Whether it be interceding for friends who do not know the Lord, or asking the Lord for the strength to live out the gospel in a place like Columbia, or even praying with friends in one voice, prayer has moved mountains,” he said.

For Sternklar, who is seeking to be a voice for victims of human trafficking and suffering refugees around the world, the mentoring and spiritual training she has enjoyed are proving to be providential for future career endeavors.

“Seeking God during my time at Columbia will help me in future endeavors, such as in international policy. I need to be led by God in the world of politics, power dynamics, and using my voice effectively,” she said.

“If my desire is to create change, I want it to be the change that God wants. Developing a consistent and confident relationship with God and the ability to hear His voice will be critical in everything I do.”

To stay up to date with important articles like this one regarding Christian Union’s leadership development efforts at some of our nation’s most influential universities, please subscribe to the ministry’s newsletter: Click here.