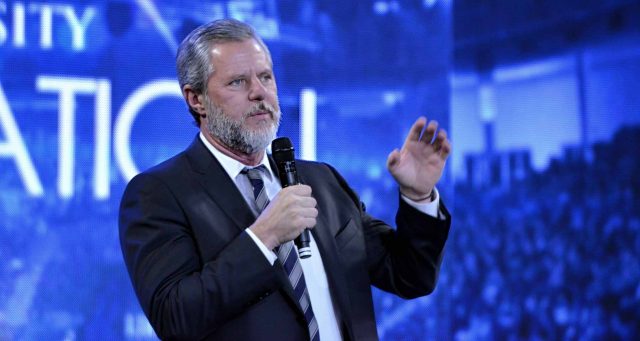 Liberty University is in a season of upheaval. The unconventional replacement of longtime board chairman Allen McFarland came on the same day that Liberty filed a lawsuit against its former president and founder’s son, Jerry Falwell Jr.

As the school separates itself from Falwell’s explosive personality and family scandals, its administrative changes signal its intention to return to its roots: political conservatism and modest, evangelical Christianity.

The lawsuit against Falwell, filed April 16 in the Circuit Court of Lynchburg, Va., asks for more than $40 million in damages. The suit seeks to recover property from Falwell and accuses him of a breach of contract and fiduciary responsibility after revelations that Falwell made secret real estate deals that benefited family and friends, including a former pool attendant that Falwell’s wife had a sexual affair with for years.

Falwell resigned from Liberty in August 2020 after posting an Instagram of himself with unzipped pants at a trailer park-themed yacht party during the pandemic, his arms around the waist of a pregnant woman who wasn’t his wife and holding what appeared to be alcohol. The evangelical school emphasizes sexual purity and restraint from alcohol, issuing fines to students caught breaking the rules.

In October 2020, Falwell sued Liberty for defamation, though he dropped the lawsuit that December. And Falwell Jr.’s personal trainer is currently suing Reuters, as he claims the outlet implied he had an intimate relationship with the Falwells.

Liberty announced that it had signed on forensic accounting firm Baker Tilly US to perform an outside investigation on the business practices of Jerry Falwell Jr. That investigation is still ongoing.

Now Liberty seems to be purging itself of most Falwell influence: Falwell Jr.’s son Trey Falwell is no longer employed as vice president, Acting President Jerry Prevo has told employees not to contact the Falwells, and Falwell Jr. tweeted that he and his family were threatened with arrest if they came to campus.

Even the Falkirk Center, the school’s politically conservative think tank named after Falwell Jr. and Charlie Kirk, has been renamed. Now called the Standing for Freedom Center, it’s led by Mike Pompeo, Abby Johnson, Mike Huckabee, Eric Metaxas and others.

Many at the organization Save71, founded by Liberty alumni hoping to create institutional change, had been advocating for Falwell’s departure weeks before his resignation. Now it must redefine its course when the Falwell family is no longer at the helm.

“We never believed that Liberty would instantly be a school that we think is a quality Christian education institution just by getting rid of Falwell,” said Dustin Wahl, one founder of Save71, which launched by calling for Falwell Jr.’s resignation after he posted an inappropriate photo on Instagram. “We thought that, you know, much more change is necessary — and we still feel that way.”

A New Focus For Liberty Reformers

Now the organization is turning its focus toward the Board of Trustees and Prevo.

Board Chairman Allen McFarland was replaced by Tim Lee. McFarland was the only Black member of the board and one of two people of color. He entered Prevo’s position when Prevo became acting president; the term expired on April 17. McFarland is still listed as a board member whose term expires in November 2021.

“Those positions are regularly renewed,” Wahl said. “In fact, it’s been described to me as basically an automatic process where, unless there’s some specific reason to not renew someone’s term, they just get renewed. Prevo had been in the position of chair since 2003. They intentionally decided to take the opportunity to not.”

Even Falwell was displeased with the change, writing a somewhat out of character tweet that claimed McFarland was removed “for advocating for diversity.” (Some have claimed this was little more than a ploy for sympathy.)

Though the shift may be a symbolic one, it is one that some interpret as the school’s desire to rid themselves of Falwell’s salacious character but keep his — and his father’s — mission intact.

McFarland has been the pastor of Calvary Evangelical Baptist Church since 1982 and is currently the President of the Southern Baptist Convention of Virginia. McFarland has a role in many other organizations, such as ABWE International and Kids Across America. He’s been on Liberty’s Board of Trustees since 1991 and teaches theology classes on campus.

“I don’t believe I’ve ever met a more genuine person who cared for and loved the students and university,” former student Buddy O’Berry tweeted. “What an incredible individual.”

Lee has been a full-time evangelist for 40 years. He’s also Co-Chair of the National Committee of Veterans for Sen. Ted Cruz (R-TX) as well as an author and contributor on Fox News. Lee has also been on Liberty’s Board of Trustees since 1991.

Save71 contrasted Lee and McFarland’s responses to an email sent regarding Falwell’s infamous mask tweet. Falwell posted a face mask that had an image of the Virginia governor wearing black face next to a white-hooded Ku Klux Klan member.

McFarland has even been credited with inspiring Falwell’s public apology about the tweet, as the two had a private meeting hours before he deleted the tweet. Public apologies from Falwell are rare.

“So many students and alumni say that McFarland is a man of integrity and honesty,” Wahl said. “I think he was an earnest man who cared about students. Tim Lee, in contrast, is a culture warrior; he is a gruff man without a lot of interest in student concern.”

Critics of Lee say his tone may be more professional, but he upholds many of Falwell’s views. A political conservative, Lee has lauded Falwell Sr. and Jr. for being defenders of the faith and the Christian right. He’s preached on traditional views of sexuality and gender and was recently teasing some users about their joy over COVID-19 vaccines on Twitter.

Searching For a New Approach

For many years, Falwell’s fiery and at times controversial public appearance was the concern of many outside the school. But for most in attendance, Liberty junior Kendall Covington says his presence was just a fact of life.

“I think the majority of the student body just didn’t really care,” Covington said. “The only information that they ever got was whenever he showed up to convocation and spoke or how he was affecting the political scene. That’s really all they got. And, you know, students were focused on getting their degree.”

That changed in August with Falwell’s racy Instagram post from the yacht party. It was a violation of the school’s code on alcohol and vulgarity. Falwell was placed on an indefinite administrative leave for the photo.

It was the beginning of the end for Falwell’s public position; by the end of the month, news had broken about his wife Becki’s seven-years-long affair with Miami-based pool attendant turned business partner Giancarlo Granda. Granda told Reuters the affair began when he was just 20, and that Falwell sometimes enjoyed watching when Becki and Granda had sex. Falwell resigned from Liberty the next day.

The lawsuit against Falwell includes photo evidence of his behavior, including the notorious yacht picture, a video of Falwell at the gym with two young girls and photos of the Falwell family at a Miami club. The case rests on whether Liberty can prove three main offenses: that Falwell Jr. is breaching contract by keeping personal devices used to conduct confidential business, that his “personal impairment by alcohol” and other actions damaged Liberty financially and that Falwell Jr., his wife and Granda were keeping threats of extortion clear from the Board of Trustees.

Liberty has always been a politically conservative Christian school. It was clear in Falwell Sr.’s mission, and it isn’t a mission the school’s current leadership are trying to distance themselves from.

“I think Prevo wants to recreate the school and the image of Falwell Sr.,” Wahl said. “They want to go back to the roots of the school.”

Covington, who recently joined Save71 as a student representative, noted that common problems she and other students have encountered are a lack of transparency and internal censorship. She said she wasn’t hopeful this would change under Prevo’s leadership.

“It seemed like they were just putting in another person who’s going to do the exact same thing as Jerry Falwell Jr.,” Covington said, “who was going to use his position to do the things that he wanted to do and completely disregard the student body.”

Though Liberty’s leadership has been overhauled, that change comes primarily in the name. The Standing for Freedom Center connected to the school still advocates for the same conservative values — though the names of Falwell and Kirk are no longer on it.

Falwell Jr.’s platform as the contentious leader of Liberty has been removed, but the family name and mission show no signs of departing anytime soon.

“I’ve thought a lot about whether I want to switch schools because Liberty University will have a lot of implication behind that diploma,” Covington said. “That’s really frustrating because that’s not what I signed up for. However, the professors and the student body have convinced me to stay. As an alum, I’ll do the best I can to protect the students and offer a different perspective for people on the outside looking in at Liberty.”

Despite the eradication of Falwell Jr.’s family from the university, one wildcard remains. Jonathan Falwell was named Liberty’s Campus Pastor earlier this month, becoming more involved with the school than he has been.

He and Falwell Jr. have, in the past, kept to their own domains. Some alumni have pointed to Jonathan as the spiritual leader of the Liberty community while Jerry was the business leader — and some suggest Jonathan might be a candidate to join the school in leadership.

“I think it’s still very possible that they will name Jonathan is the new chancellor,” Wahl said, “keeping Prevo as president and naming Jonathan chancellor as well.”

Jillian Cheney is a Poynter-Koch fellow for Religion Unplugged who loves consuming good culture and writing about it. She also reports on American Protestantism and evangelical Christianity. You can find her on Twitter @_jilliancheney.