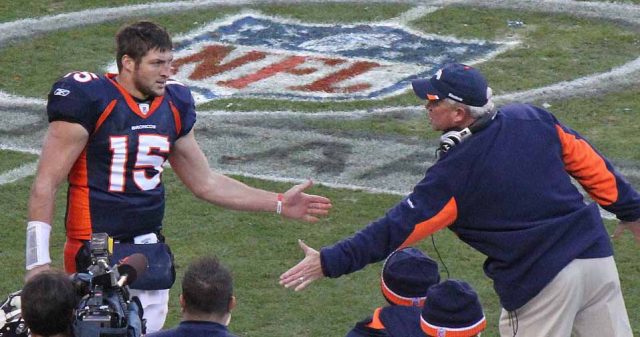 Tim Tebow has called another audible in his remarkable career.

According to ESPN.com, Tebow signed a contract with the Jacksonville Jaguars on Thursday (May 19, 2021) as a tight end, reuniting him with Urban Meyer, his former head coach at Florida.

In college, Tebow played quarterback on two national championship teams and won the Heisman Trophy under Meyer, the new head coach of the Jaguars.

He has never played tight-end in college or at the pro level, but tremendous challenges are nothing new for Tebow. Earlier this year, he retired from baseball after playing in the New York Mets farm system, where he made it to the Triple-A level.

“I loved every minute of the journey, but at this time I feel called in other directions,” Tebow said in a statement.

And that direction is a reunion with Meyer and with pro football.

In 2011, Tebow led the Broncos to a thrilling overtime playoff victory against the Pittsburg Steelers. Despite a penchant for pulling out dramatic victories for Denver, he was never given another chance to be a starting quarterback in the NFL. Additionally, he was also famous for praying on the field, or “Tebowing” as it was known.

RELATED: Fact Check: Did Tim Tebow Kneeling For God On The Field Upset The NFL?

A Christian who has never been shy about his faith in Christ, Tebow has put that faith into action with several philanthropic endeavors, most notably the Night to Shine. Held virtually this year, Night to Shine celebrates people with special needs with a prom-type event. Attendees are crowned as kings and queens and receive the royal treatment in churches all over the world. In 2020, Tebow made a surprise appearance at the Night to Shine at Liquid Church in Parsippany, New Jersey and thanked Pastor Tim Lucas and the church for its support and participation over the previous six years.

“We are honored to partner with [Liquid] and celebrate humanity and God’s love for people,” Tebow said. “Thank you for being one of the first churches on board and for loving people so well.”

As for his NFL comeback, Tebow is hoping to make the Jaguars roster and for one more night (or a Sunday afternoon) to shine.