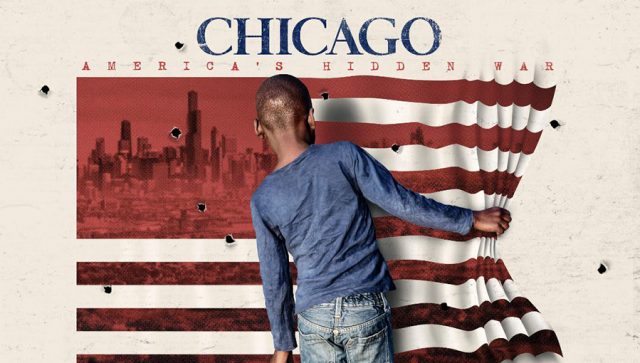 The violence in Chicago’s inner city is the nation’s most critical humanitarian crisis, according to Dimas Salaberrios, a pastor, activist, and film producer.

Salabberios’ latest documentary, Chicago: America’s Hidden War, seeks to expose the pain in that city and what happens “when a nation turns a blind eye to the staggering statistics – over 77,000 Americans shot and over 10,000 killed there since 2001.”

In one scene, the six-foot-six Salaberrios towers above a neighborhood crowd and, through a megaphone, boldly proclaims, “Father God, I pray that you would bring peace to this city!”

Salaberrios has prayed those same words in New York for decades. He knows what can happen when Christians and community leaders come together to reclaim their neighborhoods. In the Bronx, where Salaberrios planted Infinity Church, that kind of activism help to drastically reduce the crime rate.

With Chicago: America’s Hidden War, he is seeking to bring the same hope to the Windy City through the power of the Gospel.

“A big core of the movie is fasting and praying,” Salaberrios said. “Chicago is a mission field. When pastors and people in the community came together to pray, the shootings went down twenty percent.”

“A team of dedicated individuals worked hard to express, in film, the gun violence that continues to eat away at the Black community,” Bernard said in the Christian Post. “We pray but we must also act!”

Chicago: America’s Hidden War chronicles how Salaberrios and his wife Tiffany (a co-producer of the film) met with local pastors, community leaders, and even with gang members. Salaberrios, who is fearless in his desire to preach the Gospel, often shared his testimony on the streets of Chicago. And the former drug dealer has plenty of credibility. In 2015, Salaberrios published his autobiography, Street God: The Explosive True Story of a Former Drug Boss on the Run from Life in the Hood..

On NET TV’s Walk in Faith program, Salaberrios shared some chilling examples of how dire it is in some Chicago neighborhoods.

“I fasted for forty days, walking the streets, and going up to the drug dealers and killers. I would tell them my story and try to get them to stop the killing,” he said. “We landed in a war zone. New York—even when it was the murder capital of the United States—does not come close to what is going on in Chicago. It was so bad that McDonald’s left. Walgreens left…”

In addition to his recent film, Salaberrios worked on the production of the documentary Emanuel, with Viola Davis, Steph Curry and Mariska Hargitay. Emanuel chronicles the 2015 Charleston church shooting that claimed the lives of nine Emanuel AME Church members in an act of domestic terrorism.

Last year, in the wake of the George Floyd murder in Minneapolis, Salaberrios travelled to that city to help pray and keep the peace. Later, in New York, he helped lead prayerful protests.

With his latest project, Salaberrios is again seeking to be a voice in a wilderness of unrest.

“We must unite to address these issues in Chicago and other major cities in order to protect our nation’s youth from the gun violence that has claimed more American lives (in Chicago) than the wars in Iraq and Afghanistan combined,” he said.

“For too long, violence in Chicago has been met with apathy and outrage alone is fruitless. This movie will help all Americans learn how to tackle the urgent crisis that is going on in America’s heartland and take actions to stop it, regardless of where they are from or how they are different.”