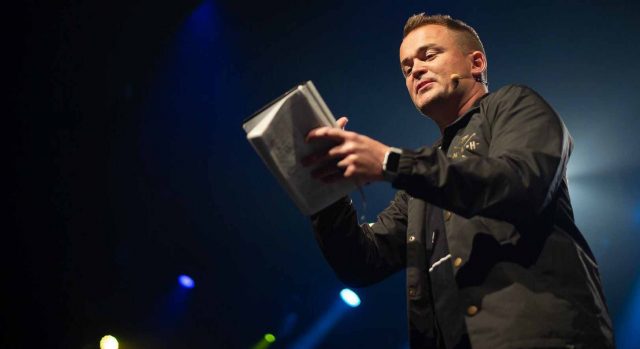 NEW YORK— It all started with an English paper at North Dakota State in 2004. From that paper as a college student, Nick Hall founded the Christian ministry organization Pulse to bring Jesus to the next generation in innovative ways, like digital campaigns and local revival events.

“Since the pandemic hit, we’ve seen over a million people respond to the gospel through technology,” said Hall. “Which is more than we had seen in our 15-year history combined before the pandemic. I feel a great conviction to raise up a social media evangelist.”

Their latest digital event Preach Twin Cities, in March 2021, picked 10 young up-and-coming pastors to mentor and equipped them to evangelize through social media.

Samatha Funkhouser was beyond shocked when she got the acceptance email about Preach Twin Cities.

“I got this email saying, we really love your video. You’re one of our top 10 here, and we’d really love for you to come out to this event. And my jaw hit the floor. I think I may have been sitting in bed, and I jumped to my feet,” said Funkhouser, a 26-year-old youth pastor at Brooksville Wesleyan in Florida.

These young pastors are evangelizing through whatever tools they prefer.

“I found that nowadays pastors, teachers and leaders have a harder time connecting, and finding ways to make the gospel relevant because there is so much competition with Tik Tok, Instagram and Snapchat,” Funkhouser said. “I love the idea of being able to utilize what people are already comfortable with and that they enjoy.”

Hall’s formative years with his two mentors and popular evangelists Billy Graham and Luis Palau would help shape him into the man he is today. That foundation would help drive him to pursue young evangelists right as social media developed.

“What they modeled for me was being a person with one message,” Hall said. “The evangelist doesn’t have 15 messages to give, they have one message ‘come to Jesus’. The Billy Graham team early on before they were an organization had a saying: ‘We are changing with the times, we are anchored to the rock.’ So I would say the message never changes, the packaging always needs to change.”

This willingness caught the attention of 26-year-old Kristoff Hart, a student pastor at Cross Point church in Nashville, Tenn. He prefers evangelizing on Tik Tok, where he has 25,100 followers.

Pulse was on Hart’s radar because of a digital event that the organization hosted during the pandemic. He was happy to be a part of Preach Twin Cities and evangelize.

“We have to look at digital and social media as an evangelistic opportunity, and quite honestly the greatest opportunity of our time,” Hart said. “The beautiful thing is we actually have a chance to fulfill the Great Commission, that I could say something from the comfort of my home in Nashville, Tennessee, and reach somebody in South Africa. And I’ve seen that happen.”

In a generation largely documenting their lives without God, some are displaying their newly found faith in Christ.

Atlanta-based actress and singer China Anne McClain, 22, recently began posting about her walk with Christ on social media sites. She has 7 million followers on Instagram and 13.3 million on Tik Tok. In an Instagram post, she explained she’s following where God leads her.

This year a survey found the number of Americans who identify as members of a house of worship dropped to its lowest level in a century, below 50%, according to Gallup. According to Pew Research from 2018-2019, 26% of Americans now identify as atheist, agnostic or nothing in particular, up from 17% in 2009. Young people, particularly the growing number who are unmarried and childless, are driving the trend of religious unaffiliation.

Many pastors are familiar with the so-called “nones” and aim to bring them back into the faith they knew as children or introduce them to church in a way that breaks stereotypes about evangelicals and Christians.

“I like to encourage people. I don’t think they’re rejecting Jesus, I think they’re rejecting things that don’t look like Jesus,” said Hall. “ I don’t think they are super interested in playing church. I think in previous generations, there was enough peer pressure to just be a part of the church. And that was enough.” Hall believes that cultural Christinaity (identifying as Christian but not engaging with a church) is declining and that this generation has spiritual hunger and wants true intimacy with God.

Hall plans to multiply the 10 from Preach Twin Cities and mentor more young evangelists as they continue to spread the Christian message.

“This fall we’re going across the country, and we’re trying to find 100. So where we started with the 10, now we’re wanting to multiply that and I’m actively looking for 100 young men and women with a call of God on their life, so that we can come alongside and unleash the calling,” Hall said.

While social media has become a norm for most Americans, there are still pastors and churches that are hesitant to use social media. Hall has advice for those people.

“If you don’t have space for the passion in this next generation, they will move forward without you,” he said. “Because they’re not going to ask for permission to follow Jesus. But they do need role models, and they do need training and coaching. They do need us to stand with them, for them, and to caution them, but they’re already doing amazing things.”

Princess Jones is a writer based in New York City. She was previously an editorial clerk at the New York Post and interned for Religion Unplugged and the New York Amsterdam News. She is an alumna of Trevecca Nazarene University in Nashville, Tennessee and of the NYC Semester in Journalism at The King’s College in New York City.