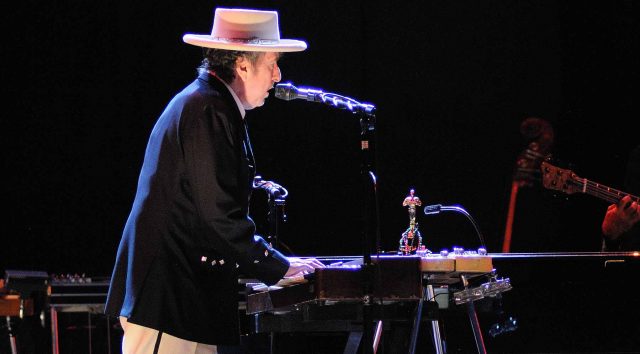 (OPINION) Night after night, Bob Dylan’s 1979 Gospel concerts at San Francisco’s Warfield Theatre made news for all the wrong reasons, according to angry fans.

The November 11th show opened with Dylan roaring into “Gotta Serve Somebody” from “Slow Train Coming,” the first of what Dylanologists called his “born-again” albums.

To add insult to injury, these concerts included fiery sermons by Dylan, while he avoided classic songs that made him a legend.

“I was 19 years old and that was my first Dylan concert,” recalled Francis Beckwith, who teaches Church-State Studies at Baylor University. “The atmosphere was highly charged. Some people booed or walked out. … There were people shouting, ‘Praise the Lord!’, but you could also smell people smoking weed.”

Beckwith kept going to Dylan concerts, while following years of reports about whether the songwriter was still a Christian, had returned to Judaism or fused those faiths. These debates will continue as fans, critics, scholars and musicians celebrate Dylan’s 80th birthday on May 24th.

With a philosophy doctorate from Fordham University in New York and a law degree from Washington University in St. Louis, Beckwith is certainly not a conventional music critic. He made headlines in 2007 when – while president of the Evangelical Theological Society – he announced his return to Catholicism.

To mark that birthday, Beckwith is publishing online commentaries on what he considers Dylan’s 80 most important songs. The Top 10: “Like a Rolling Stone,” “My Back Pages,” “Stuck Inside of Mobile With the Memphis Blues Again,” “Mr. Tambourine Man,” “Visions of Johanna,” “Tangled Up in Blue,” “Blowin’ in the Wind,” “Precious Angel,” “It’s Alright, Ma (I’m Only Bleeding) and “Desolation Row.”

Beckwith considered three factors – popularity, lasting cultural significance and, finally, whether each song was “something I could listen to over and over.” He stressed that Dylan’s entire canon includes images and themes rooted in scripture and faith.

“When you listen to Dylan you can hear that he has been reading classic literature his whole life. References to Dante and St. Augustine are as likely to show up as commentary about politics,” said Beckwith. “You also see signs of his Jewish faith and heritage, of course. But he was quoting the New Testament before his conversion to Christianity. … Dylan has also soaked up generations of American music – especially folk, Gospel and blues.”

It’s important to see the tension, throughout Dylan’s life, between blunt “finger-pointing protest songs” and poetic work about culture, faith and his personal life. The “born-again” albums, Beckwith noted, included many songs commenting on current events, as did the ’60s classics that made Dylan a superstar.

Critics who said Dylan “went secular” after 1981 were not paying attention.

“Take ‘Infidels,’ ” said Beckwith, referring to a 1983 album. “It’s packed with scripture, even though critics said it showed that he had outgrown his born-again faith. … They were looking for evangelical preaching and, instead, it was full of medieval Christian images and literary references. He went over their heads.”

The title song from a recent Dylan disc – “Tempest” in 2012 – is about the Titanic. But there is this twist in the lyrics: “The captain, barely breathing, kneeling at the wheel. Above him and beneath him, fifty thousand tons of steel … In the dark illumination, he remembered bygone years. He read the Book of Revelation and he filled his cup with tears.” Dylan concludes that “there is no understanding … the judgment of God’s hand.”

Yes, this song is about the sinking of the Titanic. But it’s clear Dylan has created a religious narrative about “the arrogance of man” and the “brokenness of our world,” said Beckwith.

“Dylan is deeply skeptical about human motives and actions, including his own. He keeps returning to ancient truths, traditions and books that many ignore. He isn’t saying that we need to destroy things, like many heroes of the counterculture claimed. Dylan is saying we have failed to live up to those old truths and traditions. He wants to learn from the past.”

Terry Mattingly writes this weekly “On Religion” column for the Universal syndicate. He’s been a reporter at The Rocky Mountain News in Denver, The Charlotte Observer and The Charlotte News. He has degrees in journalism, history and religion from Baylor University and the University of Illinois. Republished with permission of the author.