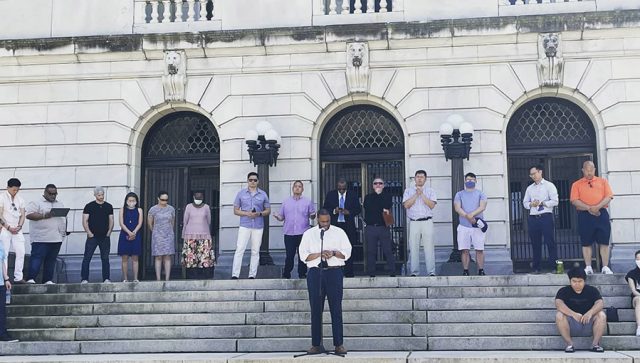 On a hot and breezy Pentecost Sunday afternoon, an assembly of Asian and Black pastors and church members met on the steps of the Bergen County Courthouse. They lamented, prayed, and repented, pleading for a mighty wind to come to refresh the Church and blow away the racism they have experienced.

The event, entitled “A Call for Covenantal Solidarity,” was hosted on May 23 by the Asian and Black Pastors Association of Bergen County. The rally was held in response to the alarming rise in violence against Asian-Americans, locally and nationally.

Ahn, speaking from Ephesians 2, said the Church needs to see racial justice as a gospel issue because the death and resurrection of Jesus Christ has “destroyed the walls of hostility” and reconciled us to God and each other. Overall, the Church has been guilty of not preaching the complete gospel by ignoring racial justice, he said.

“Racial justice isn’t a social issue. It isn’t a political issue. It’s a gospel issue before it’s a secular issue. Racism will never be defeated in this country unless the Church is the group that leads the way.”

Ahn said the American Church has been guilty of perpetuating racism: “We do it, not because pastors get up there on Sundays and talk about being racist. No, the Church does it through being complicit, through silence.”

But that silence was broken, at least for a day, at the rally on the steps of the county courthouse as a wide range of speakers prayed for racial justice.

Ron Walborn, of Alliance Theological Seminary, repented for the sins of “duplicity, complicity, and passivity” among the White Church in America.

“Ezekiel, Jeremiah, and [ultimately], Jesus repented on behalf of their people,” he said. “The systems we created have inflicted great pain on people of color.”

Michael Carrion, Vice President of Church Planting and Leadership Development with Redeemer City to City and a leader with the National Latino Evangelical Coalition, spoke about the history of racism against Asian Americans in the United States, “beginning with 1880 Exclusion Act and ending with the rhetoric spread from the highest office in America during the COVID-19 crisis.”

Carrion represented Redeemer City to City and the National Latino Evangelical Coalition at the rally.

“We extend our love and support and acknowledge that we have been silent,” Carrion said. “We repent for not speaking up or standing up in the past. Asian Americans are made in the image of God and deserve justice and safety.”

Rev. Jim Om, of The River Church of New Jersey, said racism needs to be addressed with the love of Christ. He applauded the Asian and Black Pastors Association for building bridges and promoting peace since it was started six years ago.

“We need to love one another as the Lord has loved us,” he said.

Rev. Doug Park, of Joy Christian Fellowship, spoke about a need for holy discontent and an openness to building relationships across cultures within the Body of Christ.

“We can learn our way out of racism if we uphold the truth of God’s Word,” he said. “Healing only comes when there is real repentance—when we not only share our hearts, but repent in front of one another.”

I.J. Hur, youth pastor of Metro Community Church, exhorted the Asian-American community to no longer be silent in the face of racism.

“We need to rise up and have a voice,” he said.

Hur recalled the pain he experienced when he was criticized by a seminary professor for asking a question about Asian-American theology.

“We are not silent people, but we have been silenced by others,” he said. “Stop trying to experience God in a white man’s body. God sees us even when America does not. We need to be angry. We need to care. Please get angry. There is a God who sees and cares and loves us.”

Shirley You, a pastor at Metro Community Church, spoke about the discrimination she has experienced, not only as an Asian American, but as a woman and as a pastor.

You recalled the plight of her Korean-American immigrant parents, who were business owners in the Bronx: “People would say, ‘Go back to your country, you chink.” As a youth, she thought her parents were targeted for racism because they did not speak English, but, sadly, she soon learned that was not the case.

“Little did I know that it would apply to me for my whole life,” she said.

“I am asking you to fight with me, to get educated. Stand up against racism and sexism.”

In closing the rally, Ahn asked the crowd to educate themselves when it came to the racism perpetuated against Asian-Americans, African-Americans, Hispanic, and indigenous people. He also asked the people to look inside their hearts and ask, “How have we been complicit in the injustice?”

Honesty about complicity is what keeps the Church from talking about racial justice.

“Nobody wants to talk about that, nobody wants to confess that—how their tribe has been complicit,” Ahn said. “But that is how we start this thing. I don’t think it will ever be a popular thing. When we come together like this, it will be a small group of people like it was on the day of Pentecost, a small group of men, where the Holy Spirit fell and He transformed the world forever.”

“If we don’t talk about this as a Christian community, racism will never be defeated in this country.”