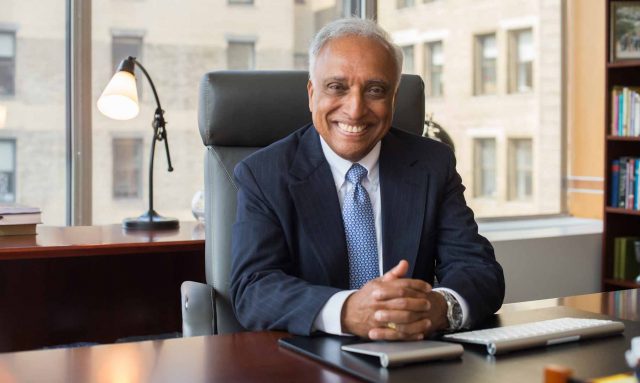 New York, NY—Rev. Scott Slocum, Chairman of the Nyack College and Alliance Theological
Seminary Board of Trustees, recently announced that Mr. Rajan S. Mathews has been named the
institution’s 13 th president after a seven-month search.

Rajan Mathews has a remarkable leadership background. He served as Director General of
Cellular Operators Association of India, the Telecom Communications Industry Association in India
from 2010-2020. In this role, he led a $36 billion advocacy group representing the communications
industry in India and globally. Prior to that, he held various senior executive positions including
Chief Executive Officer, President, Chief Financial Officer, Vice President-Controller of companies
such as AT&T, Telargo Inc., Call Sciences Inc., Afghan Wireless Communications, Beatrice Foods
International and Columbia Tri-Star Pictures.

While at AT&T, Mr. Mathews was named President & CEO of Birla AT&T, then AT&T’s largest
international investment, where he introduced digital mobile telephony services in India, building
out and operating one of India’s largest Global System for Mobile Communications networks. His
professional career began with Price-Waterhouse Coopers where he audited and consulted with
Fortune 100 Companies such as Phelps-Dodge, IBM, Exxon, and Colboro. He has considerable
expertise in international operations having managed and operated companies in England, France,
Germany, Hong-Kong, Netherlands, Afghanistan and India. He has helped raise over $1 billion in
public and private equity, debt, private placements and new venture funding.

Responding to his unanimous election, President Mathews commented, “The founder of Nyack
College, Dr. A.B. Simpson, was intentional about attracting and training those for whom education
was often a distant dream. These were the disenfranchised, the marginalized and the ‘huddled
masses’ arriving in New York City, known as ‘the gateway city to the world.’ His singular vision
and commitment forged the essential DNA of Nyack College and Alliance Theological Seminary.”

“For nearly 140 years, this vision has been carried on by men and women serving as members of
the institution’s Board of Trustees, institutional leadership, faculty and staff. It is an honor and
privilege to have an opportunity to embrace this mission and serve an institution of higher
education that continues to transform the lives of its students who go on to impact communities,
churches, and corporations in our nation and around the globe. It is this vision and commitment
and resultant transformational influence that has excited, attracted and encouraged me to become
a part of the great cause of Christian higher education.”

President Mathews earned a Master of Divinity at Gordon-Conwell Theological Seminary. At
Rutgers University, he received an MA in economics, and an MBA in finance and professional
accounting. He and his wife, Grace reside in Mercer County, New Jersey. They are the parents of two
daughters—Kavita and Nithya, who is married to Jeffy Joseph.

About Nyack College
Nyack College currently serves more than 2,000 students in its undergraduate, graduate, doctoral
degrees programs offered on site and online. In addition to its main campus in New York City, an
extension site is located in San Juan, Puerto Rico. Nyack is accredited by the Middle States
Association of Colleges and Secondary Schools and is chartered by the Board of Regents of the
University of the State of New York. Nyack’s Alliance Seminary is accredited by the Commission
on Accrediting of the Association of Theological Schools in the United States and Canada.