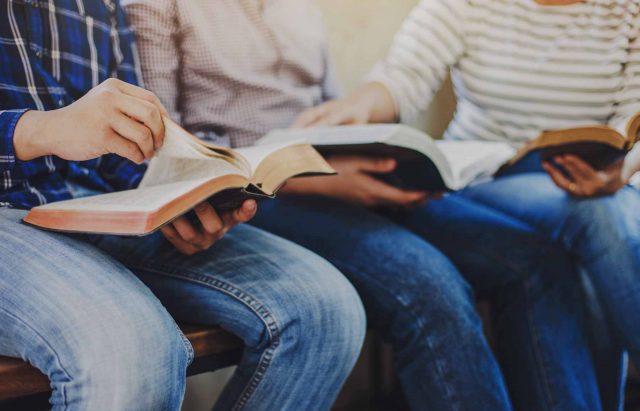 In my first year at Veritas Christian Academy (Sparta, NJ), I have had numerous conversations with a variety of people about schooling and their decision-making regarding where their children will attend school.

Many of the people I have spoken with have a clear plan for schooling, by which their children will attend a Christian K-8 school, a public high school, and perhaps a Christian college.

Let me say at the outset that I believe that parents have been given the authority by God to make decisions for their children’s well being and growth, and that would clearly include where they are going to spend the majority of their time over the next 4 years. And a Christian K-8 school and college are essential, as is involvement in a Bible-believing local church.

Also, I don’t pretend that it’s easy for Christian parents to make the investment and in some cases sacrifices necessary to choose a Christian high school over a well-funded, larger (and mostly free, except for taxes[1] and fees) public institution.

However this schooling plan may not be the best one for Christian children at this particular point in history.

Let’s look at some statistics.

By the time a Senior graduates, over their four years they will have spent roughly 720 days in school, usually 8 hours or more per day. That’s 5,760 hours spent in the company of their classmates, teachers, administrators, coaches and parent volunteers, about ⅓ of their time. If we add in extra-curricular activities, we come to about 9 hours per day.

Many high school students spend 17-20 hours (or more) a week at work[2] (about 2 hours/day), and roughly 1 hour a day interacting with their parents[3].

According to a July 2021 study by Newsweek magazine (and corroborated by a number of other sources), the average American teenager spends up to 7-9 hours a day in front of screens outside of school[4].

This has led authors like David Kinnamon and Mark Matlock to declare that personal tech (phones) has resulted in a “Digital Babylon” that particularly preys on teenagers desperate for esteem and identity.

I suspect this number is lower for some and higher for others, but nevertheless the data from multiple sources is clear: teenagers are likely to be spending an incredible amount of time on their phones – I would guess based on conversations with parents and students in our area it’s at least 4 hours total per day.

High school students, while requiring about 9 hours of sleep per day, are getting around 7 on average[5]. Church attendance in our area seems to equate to about 4h/wk for some students, but it varies widely.

Another data point,  based on my own research covering forty years in ministry: roughly 25% of committed Christian students have a quiet time, usually about 3 times per week, and that time with God and His Word averages out to about 5 minutes a day.

So here are the stats (excluding personal items):

NOTE: multi-tasking results in percentages that don’t exactly add up to 100%

CONCLUSION: Christian influence for the latter group is 7x that of the former group.

On top of all this we must consider the clear truth that public schools in New Jersey are mandated to indoctrinate students into critical theory, the revision of history, and the normalization of non-Biblical lifestyles[6].

As E. Ray Moore of Frontline Ministries has said, “Education is not religiously neutral, it is either based on sound Biblical truth or it is based on a secular foundation”.

One final observation: most high school students have not learned to practice their own faith by the time they reach the end of 8th grade – it’s often a “shadow” of their parent’s or youth leaders’. The pressure of peers and the media culture is just too powerful for most of them to stay connected to God without additional Christian input.

High school is the time when students often ask the hard questions about their faith and, most importantly, decide whom they are going to serve.

In all honesty, attending a Christian high school does not guarantee a teenager will follow Jesus with all of their heart. As per numerous Barna and Pew Research studies, the reality is that it’s the vitality, the “daily witness and walk” of the parent’s life in Jesus that is the best predictor of a student’s future faith.

But having said that, the difference in Christian input is so marked between Christian and public schools, and the indoctrination in public schools so real, that Christian parents certainly must pause, pray and seriously consider what is the best thing for their children.

At the end of the day, I know it’s hard. But parenting in this era is often a series of difficult choices. I trust that God will lead you and your friends into choices that both will glorify Him and bring you peace.