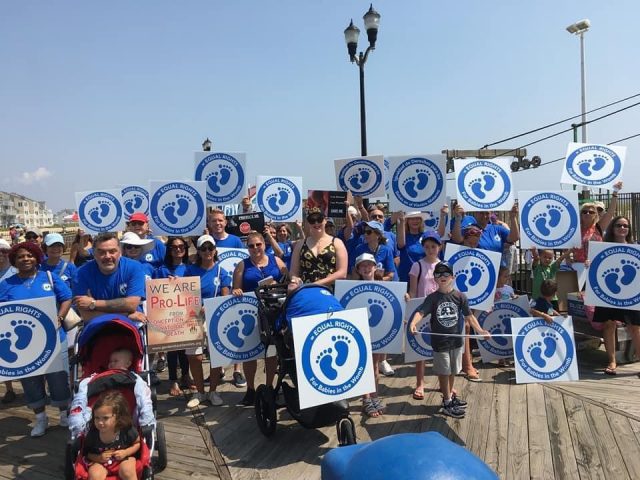 Two major pro-life nonprofits are ramping up their fight for the rights of unborn babies.

The Family Policy Alliance of New Jersey and New Jersey Right To Life have recently put calls out to supporters in their ongoing battle against a controversial piece of legislation that, if approved, would further entrench abortion rights into New Jersey State Law.

If it becomes law, the Reproductive Freedom Act (A4848 / S3030) would deem that access to “safe and legal abortion care” is essential to women’s health, autonomy, and privacy.” Assemblywomen Valerie Vainieri Huttle (District 37) and Mila Jersey (District 27) are the bill’s primary sponsors.

On July 16, a coalition of New Jersey pro-life organizations, including NJ Right to Life, Family Pollicy Alliance of NJ, clergy, and activists, held a “prayer walk to save babies’ lives” along the Seaside Heights boardwalk.

In the spring, a similar coalition united for a prayer rally against the legislation at Trenton’s War Memorial Building. Hundreds of people attended the rally.

“Evidence is mounting that New Jersey intends to be the Garden State for the harvesting of fetal tissue,” Dr. Kathleen Ruddy, a retired surgeon, said in a press release issued by the Family Police Alliance. “In fact, this appears to be the driving force, the motive, and the objective of Governor Murphy’s abortion bill.”

Other opponents said the legislation would use taxpayer money to help women from any state, not just New Jersey, by paying for those women’s abortions if they come to New Jersey to have them performed.

“It would subsidize human trafficking by paying for the abortions of their slaves and potentially subjecting them to forced sterilization,” according to Rev. Greg Quinlan of The Center For Garden State Families.

The legislation would prevent parents from being notified if their daughter has an abortion. It would also allow non-physicians to perform abortions if it “violates their personal religious or conscience objections,” according to NJ Right To Life. It would also expand the state fund that pays for undocumented immigrants to receive prenatal care and postpartum and abortion services.

Legislators in the State Senate and State Assembly have yet to act on moving the beyond their bills initial introductions, which were done in October. Gov. Phil Murphy, a Democrat running for re-election, previously said he wanted the State Legislator to pass the bill before June 30, before it goes on a break.

Murphy and his wife attended a webinar with Planned Parenthood, Vainieri Huttle, and state Senator Lorettta Weinberg, who is sponsoring the bill’s Senate version, according to Right To Life. Their goal was to pressure legislators to pass the bill.

“Although we have heard that legislative leaders are reluctant to pass S3030/A4848 before the November election, we should not take anything for granted,: Right To Life said in an email to supporters.

According to Shawn Hyland, the Family Policy Alliance’s executive director, New Jersey ranks No. 2 among the 50 states and Washington, D.C. for the percentage of pregnancies that end in abortions.

“It seems our governor will not be satisfied until we shamefully hold the title as the no. 1 abortion state in America,” Hyland said.

Proponents of the bill attributed the lack of advancement to the fact that the state’s legislative election is in November.

“We have spoken to Assembly Speaker [Craig Coughlin} and staff of the Senate President [Stephen Sweeney] and we have not heard anything from them other than they are champions of women’s health care,” said Kaitlyn Wojtowicz, public affairs vice president for the Planned Parenthood Action Fund of New Jersey. “Still this bill has not moved forward.”

Weinberg told NJ.com she was perplexed that “a woman’s right to choose and making sure that right is in all our state laws, is still something people should be nervous about in the state of New Jersey. I thought that was settled a long time ago. If there is an offer of any compromise, I as the prime sponsor in the Senate would certainly listen.”

New Jersey Right To Life encourages residents who oppose the legislation to contact their state representatives. A pre-written email from the organization can be generated on their website. It also wants people to contact Senate President Stephen Sweeney and Assembly Speaker Craig Coughlin and urge them to refrain from scheduling the legislation for a hearing or vote “now or in the future.”