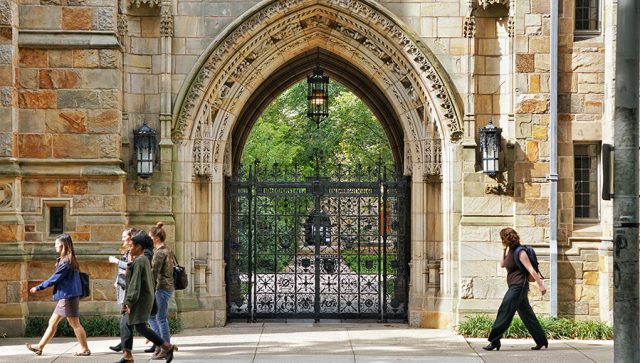 Editor’s note: The following article was reprinted with permission from Christian Union: The Magazine.

This spring, two academic seminars with ties to Ivy League universities came under fire for incendiary comments regarding race. A University of Pennsylvania professor said white evangelicals are racists who “may end up killing us all,” while a guest lecturer at the Yale School of Medicine expressed frustration with the national dialogue by she saying had fantasies about shooting white people.


“If evangelicals don’t change, they pose an existential crisis to us all,” Butler said, according to Briebert.com. “They are part and parcel of the reason why we cannot move forward…their racism, their sexism, their homophobia, their lack of belief in science, lack of belief and common sense may end up killing us all.”


In the aftermath, a University of Virginia alumnus called the panelist comments “school-sponsored hate speech.”


“Members of UVA Department of Religious Studies faculty have unloaded on white evangelicals in as wide-ranging and comprehensive an example of collegial vitriol as you will ever watch or read,” wrote James Sherlock in a column on Bacon’s Rebellion, a public policy blog.


Despite Sherlock’s threat to file formal hate speech complaints, administrators at the University of Virginia decided the issue no longer needs further review.


“Our provost and the Dean of the College looked into this and concluded that while the panel raised ideas that could certainly be deemed controversial, it was an entirely appropriate academic endeavor and did not violate any university policy,” UVA spokesperson Brian Coy told The College Fix.


This is not the first time Butler has come under fire for controversial comments. In 2013, she wrote an op-ed for Religious Dispatch in the wake of the not-guilty verdict of George Zimmerman, who was accused of murdering Trayvon Martin.


“God ain’t good all of the time. In fact, sometimes, God is not for us,” she wrote. “As a matter of fact, I think he’s a white racist god with a problem. More importantly, he is carrying a gun and stalking young black men.” Her comments attracted national media attention and an uproar on Twitter deeming Butler a racist and calling for Penn to fire her, according to the Daily Pennsylvanian. Butler, a tenured professor, was not fired or disciplined.


While Butler’s recent comments about evangelicals were deemed offensive and racist, the sound bites that emerged from Dr. Aruna Khilanani’s talk at Yale School of Medicine’s Child Study Center were shocking and appalling. The lecture was entitled “The Psychopathic Problem of the White Mind.”


“Nothing makes me angrier than a white person who tells me not to be angry, because they have not seen real anger yet,” said Khilanani, according to the New York Post. “I had fantasies of unloading a revolver into the head of any white person that got in my way, burying their body and wiping my bloody hands as I walked away relatively guiltless with a bounce in my step. Like I did the world a favor.”


Khilanani, a New York City-based psychiatrist and psychoanalyst, said her remarks were in response to the “intense rage and futility” people of color purportedly feel when talking to white people about racism.


Later, she told the New York Times that her words had been taken out of context to “control the narrative.” She said her lecture had “used provocation as a tool for real engagement.”


In a statement, the Yale School of Medicine expressed concern about Khilanani’s offensive words, but still posted the event online with limited access.


“School of Medicine leaders, including Dean Brown and Deputy Dean Latimore, in consultation with the Chair of the Child Study Center, reviewed a recording of the talk and found the tone and content antithetical to the values of the school,” the statement read. “In deciding whether to post the video, we weighed our grave concern about the extreme hostility, imagery of violence, and profanity expressed by the speaker against our commitment to freedom of expression. We ultimately decided to post the video with access limited to those who could have attended the talk— the members of the Yale community.”


“The racism expressed by Dr. Aruna Khilanani is deeply worrisome and counterproductive. Of course, as an invitee, she is free to speak on campus. But her views must be soundly rejected,” he wrote.


Rod Dreher, a writer with American Conservative, criticized Yale for hosting a racist rant: “What we all need to confront is the fact that this psychiatrist, under the auspices of one of the most prestigious universities in America, delivered a lecture featuring unapologetic, unrestrained racism, and … nobody in that institution or in her circles cared.”


“What is wrong with you people at Yale, white and non-white, standing for this?” asked Dreher. “Do you have consciences? Do you have spines?”

To stay up to date with important articles like this one and Christian Union’s leadership development efforts at some of our nation’s most influential universities, please subscribe to Christian Union’s: Click here.