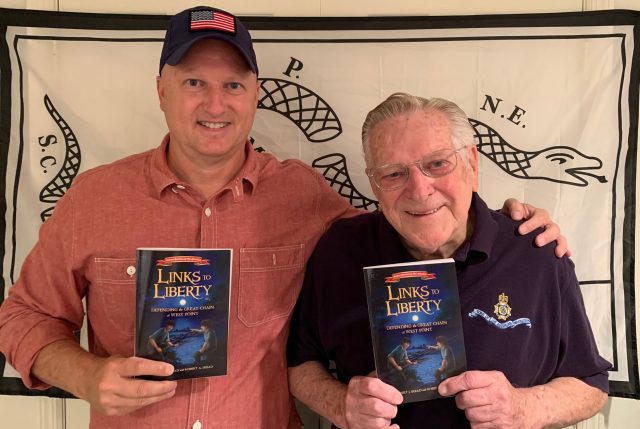 The father and son writing team of Robert J. Skead and Robert A. Skead released the third book in their American Revolutionary War Adventure Series—Links to Liberty. In this story,John and Ambrose Clark (identical twins) are hot on the trail of the spy who gave away the secret of their father’s mission, which ultimately led to him being shot by Redcoats. But when there is an attack on America’s new strategic defense on the Hudson River—the Great Chain at West Point—they must protect it. They soon discover things aren’t always as they seem and their friends have deadly connections.

This inspiration for the American Revolutionary War Adventure series came when the son, Robert J. Skead, and his family visited a local home which George Washington used as his headquarters for two days during the Revolutionary War. “I suddenly imagined being a child transported back in time to 1777 and going on an adventure with George Washington. I knew then I had a premise for a story. And with each step I took, I seemed to get more ideas about what could happen. I didn’t write the story until years later, when I told my dad about the idea. Later, he surprised me later with an entire treatment of the story, from beginning, middle to end. We then ventured on the most amazing father-son trip ever—writing a book together.”

The Skead duo brings little known pieces of history to light. Patriots, Redcoats & Spies featured the Culper Spy Ring. The next book Submarines, Secrets & a Daring Rescue features another lesser-known part of history, the use of America’s first submarine created for warfare called the American Turtle. The third book in the trilogy focuses on the Great Chain at West Point, which literally was a great chain the Continental Army had forged and draped across the Hudson River to block British ships from going upriver. Nicknamed “Washington’s Watch Chain,” the device worked and kept the British Navy in New York.

Bergen county, New Jersey, residents will appreciate two key and fun scenes in the story that take place at the historical Zabriskie home in Wyckoff where the Skeads reside.

The father in the duo, Robert A. Skead (a World War II veteran, Son of the American Revolution, and Mayflower descendant), became a published author via this series at age 89. Now age 95, Robert A. is proof that wonderful things will happen when you stay busy and creative in your Golden Years.

The Skeads use the Revolutionary War to inspire children and adults to do great things, nurture patriotism and solidify feelings of hope, courage and bravery. Their mission is to show that the characteristics and virtues that helped shape our nation are still important today. Their ancestor, Lamberton Clark, one of the main characters in the story, fought in the Revolutionary War as a member of the Connecticut Militia and the Continental Army.

Discussion Guide Questions, Historical Character BIOs, Glossary, Letters from General Washington and other patriots pertinent to the stories are terrific classroom aids in the back of the books.

Links to Liberty is available in paperback nationwide wherever books are sold for $13.00.

Robert J. Skead’s books can also be found at robertskead.com.