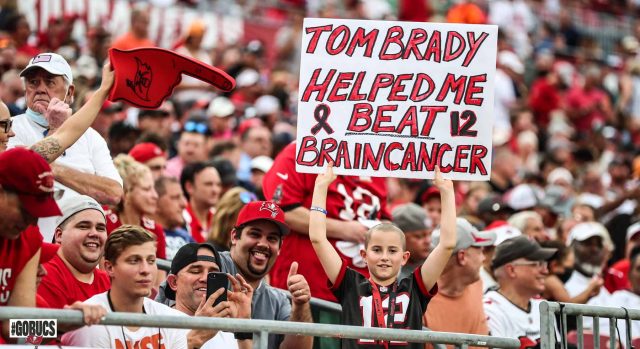 During Sunday’s game, Tampa Bay quarterback Tom Brady took time to visit to a boy in the stands who credited the G.O.A.T. with inspiring him during a life-and-death crisis. According to CBS sports, Noah Reed, a nine-year-old Buccaneers fan, held up a sign at Raymond James Stadium that read “Tom Brady helped me beat brain cancer.”

In the fourth quarter, Brady gave Noah his NFL Crucial Catch hat and, according to several news reports, the boy burst into joyful tears. On Instagram, Reed’s mom thanked Brady by saying how “this kid fought and fought with a dream that one day he could watch you play in real life.”

At a press conference after the game, Brady said, “That was really sweet. Obviously a tough kid man. Puts a lot in perspective of what we’re doing on the field. In the end it doesn’t mean much compared to what so many people go through, so we all try to make a difference in different ways…”

Here you have—not only the greatest QB of all time, but the probably greatest football player of all time—putting sports into proper perspective. In this historic game, a 38-3 victory over the Chicago Bears, he also became the only quarterback to throw 600 touchdown passes.

As a lifelong fan of the Washington Football Team and the New York Mets, I know all too well about the occasional joy, but mostly trials and tribulations of rooting for the team without a name and the Amazins. But Brady’s words help remind me of what really matters.

In the gospels, Jesus constantly spoke about our tendency to overvalue the unimportant and undervalue what is most important. After a group of religious leaders tried to confound Him with many questions regarding the observance of Jewish laws, Jesus silenced them with simplicity and boiled it down to two commands: “You shall love the Lord your God with all your heart and with all your soul and with all your mind. This is the great and first commandment. And a second is like it: You shall love your neighbor as yourself.”

As He walked this earth, preaching the Good News of the Kingdom, healing those who were afflicted, and comforting those who mourn, Jesus also reminded us, that if we love God, we should also love our neighbors, and children like Noah Reed: “Truly, I say to you, as you did it to one of the least of these my brothers, you did it to me.”

Regarding misplaced passions and worldly possessions, Jesus asks us the sobering question: “For what does it profit a man to gain the whole world and forfeit his soul?” (Mark 8:36).

Meanwhile, here in Metro New York, a ticker-tape championship parade would be awesome for the Mets, Yankees, Giants, Jets (been a long, long time), Knicks (almost as long as the Jets), Nets (never happened), Rangers or Devils. But, in the meantime, let’s not lose sight of what’s really important. 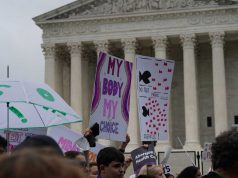