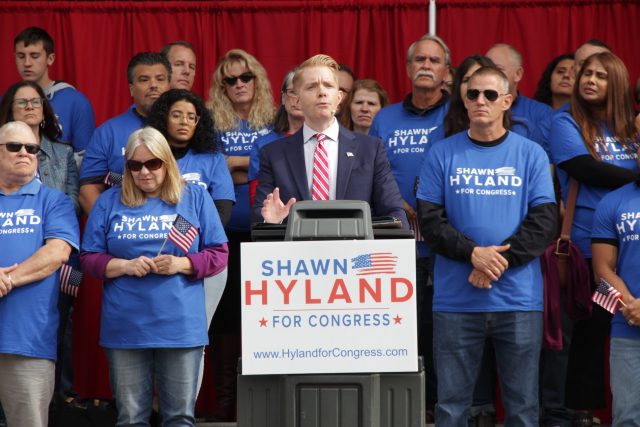 Hyland most recently served as the Executive Director of Family Policy Alliance of New Jersey, a statewide public policy advocacy organization representing tens of thousands of New Jersey residents. His candidacy, in the 2022 election, “seeks to build a better America – renewed in a spirit of civility, revitalized by timeless convictions, and rededicated to seeking the common good. “

“I am concerned about the critical polarizing narrative that is tearing our country apart,” Hyland said. “Our society is untethered from the values that once united our nation. The Far Left wants to disrupt and destabilize society by dismantling the family, defunding the police, demoralizing students, and destroying the work ethic. This destructive and divisive agenda needs to be stopped.”

Before joining Family Policy Alliance of New Jersey, Hyland served as the New Jersey State Coordinator for Christians United for Israel – the largest pro-Israel organization in the world with 10 million members. In 2018-2019, he led an Ocean County faith-based initiative “Love Your Neighbor,” in partnership with the Ocean County Prosecutors Office, to inspire tens of thousands of residents to stand against racism and prejudice. Hyland launched Serve Jersey Shore community service weeks in cooperation with dozens of churches and thousands of volunteers, (2017-2018).

An ordained minister, Hyland was raised in Ocean County and has lived in the current congressional district for thirty-six years. He resides in the Bayville section of Berkeley Township with his wife of twenty-one years Glennys Hyland. Together, they have four children ages 27, 23, 17, and 16.

More information can be found at the Shawn Hyland for Congress official
campaign website: www.HylandforCongress.com