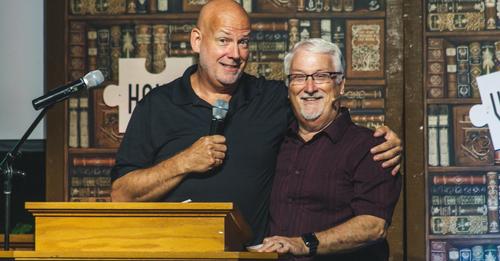 Editor’s note: Robert Hayes, who, along with his wife Joyce, served as worship leaders and Artists-in-Residence at America’s Keswick for the last 21 years, passed away on October 18, 2021 at the age of 55. The following article is a tribute to Mr. Hayes, written by Bill Welte, President/CEO of America’s Keswick, a Christian Camp and Conference Center in Whiting, New Jersey. Reprinted with permission.

Most of you know by now that my friend and brother, Robert Hayes, went home to be with the Lord after a year+ battle with cancer. Here is the tribute I wrote and shared at his Memorial Service. Things I want to share about Robert:

1. Robert was everybody’s friend. I don’t know how he did it, but while he had many friendships that he considered his closest friends, you probably didn’t know you were on that shortlist because he made you feel like you were his best friend.

You got his undivided attention when you were in his presence, and he was laser-focused on you. He probably even wrote you a note, sent you a text, or put something on social media to let you know he appreciated you. I have never heard anyone say a disparaging word about Robert.

2. Robert was an encourager. Again, he was amazing how he could hone in on something in your life, and he would never forget to ask you about it the next time you were together. If he knew you were doing something musically, taking music lessons etc. etc. and so forth and so forth, he would encourage you to keep at it and would find ways to encourage you to develop your skills. One young lady shared that in a difficult time in her life, he walked to the piano and encouraged her to play the piano in the midst of her pain.

3. Robert loved the men of the Colony of Mercy. I think every Colony man for the past 21 years can testify that at some point, they had an encounter with Robert in some positive way. He cared about the men of the Colony and their families. He probably did as much counseling as all of our Chaplains combined.

4. Robert believed in excellence. From his music to his ministry of decorating and planning parties, Robert wanted it to be done well and to be done with excellence. Many, at America’s Keswick, enjoyed the Christmas tree displays with which he had a love/hate relationship with – he’d encourage his elves to help – but he would go back in and make sure it was to his perfection. How ironic when he was tested at CTCA, the doctor told him his lungs were lit up like a Christmas tree.

4. Robert spent his life learning about worship and teaching us to be worshippers. It was his driving passion. He wanted us to know that his God was worthy of our praise. He believed that we all had the responsibility and privilege of being worshippers and that the best way to be prepared to worship on Sunday was to worship M, T, W, T, F & S. He carefully and meticulously selected music to be sure that the message was biblical, singable, and would bring glory to God.

I could go on and on – but I want to conclude by saying that I am very grateful for my friendship with Robert that spans 23 years. It started two years before America’s Keswick at our Mid-Atlantic conference at Tuscarora Inn. I was leading worship for the conference, and Pam Wise came to me and said that a couple from Montrose Bible Conference sang. I was taught that you never relinquish the mic to someone you have never heard sing before. But I did – and that was the beginning of our amazing journey. Robert and Joyce sang my all-time favorite Robert and Joyce song – “My Redeemer is Faithful and True.”

Thousands of people have been impacted by Robert’s life, testimony, and ministry. His 21 years of ministry at America’s Keswick will never be forgotten.

Personally, I was blessed to play alongside a professional musician who had a big heart. A musician who could make the piano sing praises. An accompanist that made Joycee the most amazing soloist she is, along with countless others. An accompanist that made any choir sound good. We were connected at the heart with our music. I will miss our shenanigans on the platform, our discussions about ministry and life. I will miss our thousand texts a day. My life and yours will be ever different because of our relationship with Robert Charles Hayes. If I could get one more text from him, my guess is it would say – “My Redeemer is faithful and true.” I love you, Bubba, and I will miss you. But until then … how’s the game?