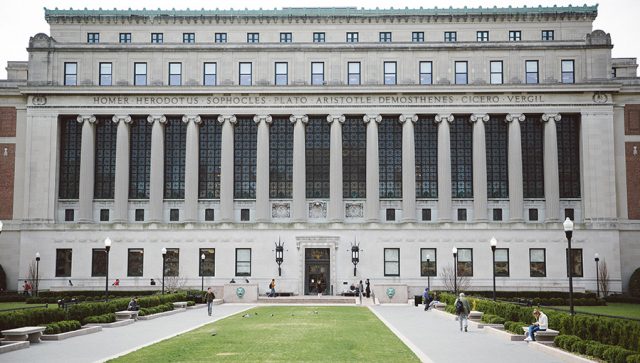 At most of the nation’s leading universities, Christian scholarship is not taken seriously. Whether it is courses that teach the Bible from a strictly literary perspective and neglect available scholarship, or students passively believing that Christianity has no response to deep philosophical questions, the Gospel is often ignored completely or viewed with disdain as ignorant and unthoughtful. Jonathan Tanaka wants to change that.

Tanaka ’23, a philosophy and pure mathematics major at Columbia University, launched the ILIAD Forum, an interactional website that aims to engage students from across the Ivy League with Christian apologetics. The ILIAD Forum, which stands for Ivy League Informational Apologetics Database, offers two sides to its site; an anonymous public forum that allows anyone with questions about Christian apologetics and thought to access information about popular questions regarding the faith, and an internal private forum geared towards Christians and those who are genuinely seeking the Lord to engage in conversation, debate, and question-asking within the context of an online Christian community.

“The Iliad Forum’s open access ‘anonymous’ format aims to be a database for Christian philosophical and theological responses to common and pressing objections to the Truth of Christianity,” said Tanaka. “More uniquely, our academic contributors aim to craft answers to questions specifically tailored to issues in the Ivy League. This results in non-Christians being able to quickly access brief, rigorous, and accessible answers to any questions they might have about Christianity with the added bonus of having access to the wider scholar-recommended academic literature on the topic.”

Recognizing that there was an opportunity to meet the intellectual rigor of the Ivy League with robust Christian scholarship, Tanaka set out to create the ILIAD Forum only six months ago. Utilizing the Christian community and resources available across the Christian Union campuses, he recruited a team of like-minded students to form a founding team.

With students from the Christian Union ministries at Princeton, Penn, Harvard, Yale, and Columbia, Tanaka began laying the groundwork for what the website would become and appointing leadership to different members. Consisting of about three students from each campus, the founding team has over 15 students who began constructing the website, creating google forms to collect data from university students, and reaching out to Christian scholars to support their efforts.

“The Christian Union network has been excellent thus far in finding biblically-faithful, passionate, and high-caliber Christian students eager to create resources in the defense of Christian philosophy in the Ivy League,” states Tanaka. “This has been exceptionally important in enticing a critical mass of students from all eight schools to join our private forum. Our founding team is diligent in establishing Christ as the central and salient figure in the Ivy League.”

The team used any available email list at their respective campuses via Google forms to solicit information about what questions their peers have about Christianity. Collating this information, Tanaka was able to begin addressing philosophical and apologetic questions on the site.

“Our central hope is that all who visit and interact with our forums will come to a better understanding of the intellectual vibrancy and potency of the Christian worldview and its place in all intellectual and practical arenas of the world. In the short term, we hope to grow our list of academic contributors to a suitable number that can respond quickly to questions that students in the Ivy League might have,” says Tanaka. “We also hope to increase the number of students and ministry staff who are active on our private forum to create a better sense of community and unity among Christians across the Ivy League. In the long term, we might think about becoming more inclusive of other campuses in the private forum.”

Even more impressive, Tanaka has enlisted the help of almost twenty-five Christian scholars and professors from some of the best seminaries and institutions across the country to offer their expertise on specific apologetic questions. Tanaka and the team matched these scholars with the questions they had gathered, asking the scholar to write a brief response to the question and provide resources, often their own book, that further examine the issue. Furthermore, a handful of these scholars operate as a board of advisors for the Forum.

“Thus far we have mainly secured collaborative relationships with scholars and professors in the seminaries in particular. We next intend to expand our pool of contributors to professors in the Ivy League and philosophers and theologians at other institution-types,” says Tanaka. “These types of scholars are quite valuable in that they are able to give brief and yet comprehensive answers to pressing questions while also citing their own more extensive work on the subject.”

As the public site has begun to be populated with apologetics questions and answers, there are currently seventy members who are actively participating in the private side of the ILIAD Forum. Tanaka sees the benefit for other believers to have a space to discuss questions, theology, and philosophy as being manifold. Not only does it provide a community for other Christians at highly academic and secular universities to be encouraged and dive deeper into Christian thought and scholarship, but it also lends itself to believers who find their faith being challenged by questions they do not yet know the answers to.

Tanaka notes that Columbia students take courses to examine Scripture from a literary standpoint while never presenting Christian scholarship and thinking. This can lead many young students to believe that their faith is lacking, unthoughtful, or simply false. Tanaka wants to provide a platform for these students to turn to where they can actively voice their questions and doubts and be met by other believing peers who have been through the same experience of living out their faith in secular and sometimes hostile environments.

“Christianity at the Iliad Forum is understood as historic orthodoxy: that framework of belief that Christians everywhere, at all times, and in every culture have believed. We, therefore, do not officially represent any denominational or parochial views representative of real doctrinal differences in Christian belief that are non-essential to a Biblically-faithful Christian orthodoxy,” says Tanaka.

“Christians of all denominational backgrounds can find a unified defense of the truth of Christianity in the scholarly responses of the anonymous forum. Furthermore, they can find an extensive online community of fellow believers willing and eager to engage in fellowship from across the Ivy League in the private forum.”

As the site continues to gain momentum and support, Tanaka hopes the Iliad Forum will become a place of rigorous theological discussion and evangelism to some of the brightest young minds in the world. He is well on his way.

To stay up to date with important articles like this one regarding Christian Union’s leadership development efforts at some of our nation’s most influential universities, please subscribe to our newsletter: Click here.