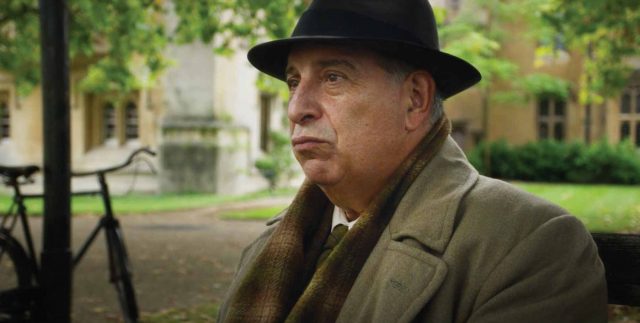 While historians argue about what C.S. Lewis did or didn’t say, it can be stated with absolute certainty that the Oxford don never patted down his rumbled, professorial tweed jacket before exclaiming, “Where’s my phone?”

That line occurs at the start of “The Most Reluctant Convert,” as actor Max McLean enters a movie set preparing for the first scene. Seconds later, the camera follows him into the real Oxford, England, where Lewis was a scholar and tutor at Magdalen College.

At first, the famous Christian writer explains how he became an atheist. When he walks into the real White Horse pub, he orders two pints of beer — with one for the viewer. Soon, scenes from his memories spring to life, with Lewis striding through them as a narrator.

“Lewis is in his imagination. He’s personified in his thoughts. … I do think that the structure emerged out of the fact that Lewis had a lot to say,” said McLean, laughing.

Thus, director Norman Stone — a BAFTA winner for BBC’s “Shadowlands” — let the “voice of Lewis articulate his struggle, his passion,” McLean said. “He is one of those rare individuals where one’s intellect, one’s emotions and one’s spirituality are completely intertwined.”

All of this is second nature to McLean, since the film covers much of the same territory as his own “C.S Lewis Onstage.” This was a one-man show at the Fellowship for Performing Arts in New York City, an off-Broadway company McLean founded and guides as artistic director. It has staged other Lewis works, such as “The Screwtape Letters” and “The Great Divorce,” drawing warm reviews from The New York Times and other major publications.

This first-person narration, explained McLean, was primarily drawn from Lewis’ autobiography, “Surprised by Joy,” and the many volumes of his personal letters.

The jump from stage to screen, of course, allowed the film’s creators to seek permission to film in some of the most important sites linked to Lewis’ life. In addition to the White Horse, viewers follow Lewis into the historic Magdalen College library, a tutor’s campus suite and, most importantly, The Kilns — the home where Lewis lived for decades with his older brother Warren and briefly with his cancer-stricken wife, the American poet Joy Davidman.

The movie ends with Lewis leaving a 1931 Christmas service at Holy Trinity Anglican Church in Oxford after he has received Holy Communion for the first time as an adult. As McLean is surrounding by the movie crew, the camera lifts high and pans, in one slow sweep, over to the parish cemetery and the grave of Clive Staples Lewis.

The key to the story, McLean noted, is the years in which Lewis became a believer after the shallow Christianity of his childhood and his years as “hard-boiled atheist.” But this conversion was not simple, since Lewis first became a mere theist. As Lewis wrote, “In the Trinity Term of 1929 I gave in, and admitted that God was God, and knelt and prayed: perhaps, that night, the most dejected and reluctant convert in all England.”

The move to Christianity was aided by a circle of Oxford friends, including the famous scholar and novelist J.R.R. Tolkien. It was the creator of “The Lord of the Rings” who — in a debate that lasted till 3 a.m. — said of Jesus, ”Either this man was and is the Son of God, or else he is a liar, a lunatic or a fraud.”

At one point in that conversation, the friends strolled along Addison’s Walk, a wooded footpath near the River Cherwell on the Magdalen grounds. While making his arguments for conversion, Tolkien drew on Lewis’ academic expertise in Greek, Roman, Norse and Medieval literature.

Lewis described that walk in personal letters, including a description of a gust of wind when leaves fell like rain.

“What makes Addison’s Walk so magical,” said McLean, is the “movement toward Christianity. That conversation with Tolkien makes him recognize the importance of Jesus. … Tolkien says to him, ‘The story of Christ is a myth like all the other myths, but with one tremendous difference — it really happened.’

“Then the rush of wind interrupts them. You just know that God was watching, that God was waiting, because he had such an extraordinary, providential plan for that encounter.”

Terry Mattingly writes this weekly “On Religion” column for the Universal syndicate. Republished with permission of the author.