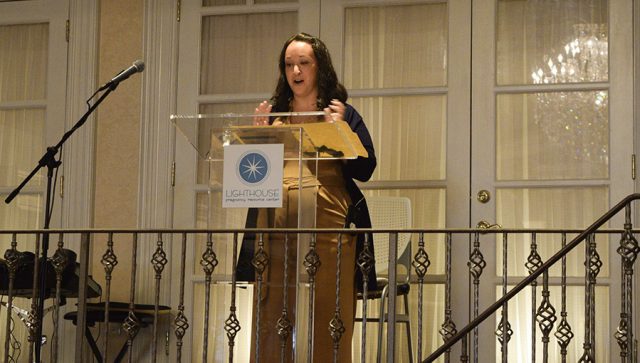 Claire Culwell is an abortion survivor—she is alive today despite two attempts to end her life by her teenage birth mother.

At Lighthouse Pregnancy Resource Center’s recent Thanks-Giving for Life 2021 Breakfast Fundraiser at The Fiesta in Wood-Ridge, New Jersey, Culwell shared her testimony of how she not only forgave her birth mother, but, by God’s grace, has been able to experience restoration and healing in that relationship and impact countless others in the pro-life movement.

“Claire Culwell’s amazing story reminds us of what is at stake in every pregnancy decision; she offers us a loving look at the lives impacted by abortion,” said Debbie Provencher, executive director of Lighthouse Pregnancy Resource Centers (PRC), which has locations in Hawthorne, Hackensack, Paterson, and Wayne, New Jersey.

“Our Thanks-Giving for Life Fundraising Breakfast is becoming a beloved tradition at Lighthouse. As we approach the end of the year, we are always so grateful for all those who make our free services possible.”

The celebration of the support Lighthouse provides was enhanced by the words of Culwell, a global advocate for life and the author of Survivor: An Abortion Survivor’s Surprising Story of Choosing Forgiveness and Finding Redemption.

Adopted by a Christian family, Culwell was unaware of the circumstances surrounding her birth mother’s pregnancy, but, as a young adult, had a desire to meet her and thank her “for choosing life for me.”

That meeting happened when she was 21-years old. Things went well, and a second meeting was scheduled—and that’s where Culwell learned the shocking truth as her birth mother tearfully confessed that she had not chosen life. “My birth mother Tonya told me I had survived the abortion she had at the age of 13. The [abortion clinic] successfully aborted my twin and accidentally failed to abort me,” Culwell explained.

After the abortion, Tonya was unaware that there was a twin baby inside her who had somehow survived. A month later, she realized her stomach was still growing. A doctor confirmed that she was still pregnant and the surviving twin was 24 weeks old.

Tonya was rushed from Oklahoma to Kansas by her family to seek a late-term abortion. But, “because of a complication from the first abortion and the risk to my birth mother’s life, they couldn’t do that,” Culwell said.

Tonya was dropped off at an adoption agency until she delivered the baby at 30 weeks. There were also complications to the baby due to the previous abortion procedure.

“I weighed three pounds, two ounces and I had a dislocated hip and clubbed feet. I had body casts up until I was two years old,” Culwell said.

When she learned the truth from her birth mother, it helped explain the health challenges she endured growing up. It also started a process of realizing that she had twice “survived something that was meant to take my life.”

But she also realized how her life was protected and spared, despite the pain of never knowing her twin who didn’t survive.

“My life, my children’s lives, and generation after generation in my line—those lives are miraculous,” she said. “I remember thinking that my life was a miracle. There is a reason I survived. I don’t know why I survived and my twin didn’t. But God protected my life. I was willing to forgive my birth mother and love her in that moment…”

Culwell credits her faith and the Christian foundation of her childhood for giving her the strength to forgive her birth mother with grace and hope.

“I can trust in the big picture that God sees….[even] when I can’t see it. I owe that to my parents and how I was raised,” she said.

Today, Culwell is using her platform to not only be a voice for the voiceless as an abortion survivor, but also for all the women in unplanned pregnancies like her birth mother. “In the most uncertain and confusing moment of her childhood, she was never given a choice,” Culwell said. “[My birth mother] said she desperately wanted someone to stand up for her, tell her she was capable of being a mother, and walk alongside her, but she was rushed to an abortion clinic instead. That moment and the choices that were made for her have had a ripple effect on my life, my children and the world.”

Culwell said she chose to share her survival story with the supporters of Lighthouse because the organization is standing in the gap for birth mothers: “In a culture that tells women that they have to choose whether to be successful and happy or be a parent, Lighthouse is empowering women to be both. This is exactly the type of ministry that our culture needs and we should rally around them with our support!”

At the Thanks-Giving breakfast, there was rejoicing over the fact that 352 Lighthouse babies had been born so far in 2021. Among other services, Lighthouse offers free, confidential services for those facing or at-risk for unexpected pregnancies, and support for under-resourced parents caring for newborns.

“At Lighthouse, our services reach and serve young women like Claire’s mother – who was being pressured by others to end her pregnancy,” Provencher said. “Lighthouse helps make the choice of life possible for those who are young, unsupported, under-resourced, or unsure of what to do.”

“We also provide after-abortion healing support, so that women like Claire’s mom who have experienced the pain of abortion can find a safe place to process that experience, and to move toward the forgiveness and freedom found in Christ.”

Culwell commended Lighthouse for walking alongside women and families in this manner, and referred to their new headquarters in Hawthorne as a model center.

“Lighthouse is ensuring these parents are not alone and giving them the resources to be stronger than their circumstances and choose life for their children,” she said.

To learn more about the free services Lighthouse offers, or find out how you or your church can partner with them, visit www.FriendsofLighthousePRC.org.