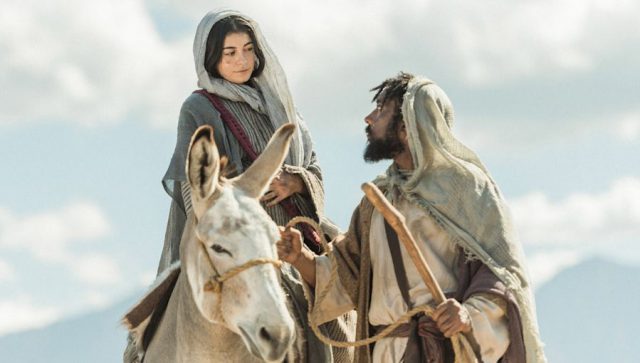 “Christmas with The Chosen,” the theatrically released Christmas special tie-in to the hit TV series about the life of Jesus, has made headlines by breaking box office records its opening weekend.

Fans of “The Chosen” TV series shocked the entertainment industry by rocketing the tiny Christmas special — which is essentially a Christmas carol show with a short Christmas-themed episode of “The Chosen” attached to it — to over $10 million at the box office its opening week. This made it the highest-grossing opening weekend of all time for a movie released by Fathom Events, an AMC-owned distributor, and the fourth-highest grossing movie of the weekend.

To put that in context, once “Christmas with The Chosen” tops $13.5 million at the box office, it will have passed almost every award-season Oscar contender so far, except “Dune,” “House of Gucci” and possibly “West Side Story.”

Dallas Jenkins, director and showrunner of both “Christmas with The Chosen”and “The Chosen” TV series, was tearful and grateful at the news. He told fans in a Facebook post:

In 2017, I experienced my biggest career failure. My film The Resurrection of Gavin Stone had an opening weekend of $1.5m, way below hopes, not even in the top ten. And its TOTAL box office was $2.3m. It broke me.

But from a message from God through a friend, I realized it’s not my job to feed the 5,000; it’s only my job to provide the loaves and fish. And for the first time in my life, I surrendered and got to a place where all I care about is pleasing God. I don’t need box office success or accolades. It doesn’t matter. Truly.

But when we just found out Christmas With The Chosen, of all things a music and episode Special about Jesus, is #1 at the box office in the entire country, it felt a little like a God wink. Especially considering we did more in one night than Gavin Stone did its entire run. I don’t care about things like this like I used to, but it’s still fun to see what God is doing in the culture. Thank you for making this happen.

Typically, films distributed by Fathom only get an extremely limited theatrical run. But “Christmas with The Chosen” was so successful they decided to extend the run through the Christmas season. This is despite the fact that “The Chosen” crew was committed to keeping with its original plan to release the special for free to fans on YouTube and on The Chosen app the following weekend, which it did on Dec. 12.

This success is especially surprising given how unconventional “Christmas with The Chosen”actually is. The movie is essentially split into two parts. The majority of the film is a combination of music videos of classic Christmas carols by different Christian music artists, interlaced with interviews with those artists, mini sermons by Dallas Jenkins and conversations of “The Chosen” cast members about how awesome the show is — or the meaning and message of Christianity and the Christmas season.

The last bit of the film is a new short episode of “The Chosen” titled “The Messengers,” which tells the story of the birth of Jesus from the perspective of his mother Mary. The excitement around “The Messengers” is largely around its status as a sort of sequel to the pilot that initially launched “The Chosen.” The show started out as a short film called “The Shepherd,” which told the story of Jesus’ birth from the perspective of a crippled shepherd who was mistreated by society but got to see Jesus’ birth along with the other shepherds told about Jesus by the angels.

The highlight of “Christmas with The Chosen”is clearly the premiere of “The Messengers” short film. While the string of beautifully shot Christmas carol music videos is certainly fun to sing along with if you’re in the company of friends willing to sing them aloud in an otherwise-empty theater — an admittedly very specific context that I will neither confirm nor deny I had the pleasure of participating in — the content itself is not far beyond what you could find by a good musical group on YouTube.

But “The Messengers” more than lives up to the hype around it. The short film does a heartfelt and satisfying job of retelling the beats we expect from the classic Nativity story, while also adding deeper character development for Mary and Joseph that helps them — and therefore their story — come more alive. It’s exactly the kind of thing that made “The Chosen” so popular.

Showing Mary privately recite the song she sang to her cousin Elizabeth (recounted in Luke 1:46-50) to herself — as a comfort throughout the events of the story and as an example of the way she keeps precious things close to her heart — is a clever and effective move. Joseph, a figure often overlooked in such stories, gets some welcome character development as well, being both admirably leader-like and protective and adorably clueless in equal measure. “The Chosen”series typically deconstructs traditionally masculine qualities as negatives within its male characters, so it was especially nice to see that balanced out here.

Personally, I liked both this and “The Shepherd”shorts enough that I would love it if “The Chosen” crew put out a short like this every Christmas while they are producingseasons — so at the end of it, they can cut them together to make a full-length Nativity movie for theatrical release. This would give me the option to add a Nativity movie to my yearly Christmas rotation. And given the success of “Christmas with The Chosen,” I think it’s safe to say that any such release would be enormously successful.

Regardless, “The Chosen”is a massive win for fans who want awareness of the show to spread and for those who want Hollywood to take more notice of faith-based audiences. Hopefully this will lead to quality faith-based programming in the future.