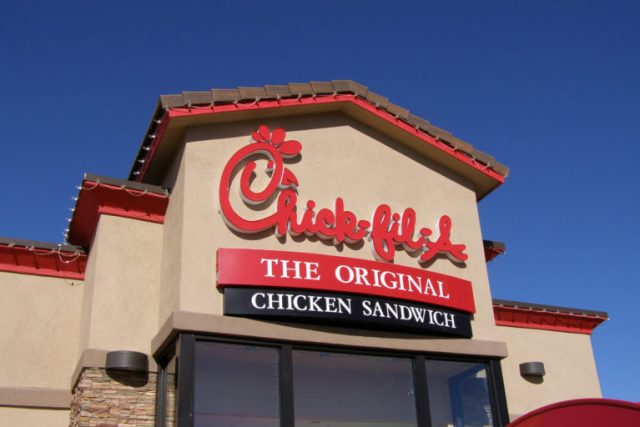 A New Jersey mayor doesn’t want a Chick-fil-A built in his town because it opposes same-sex marriage and has been accused on supporting anti-LGBTQ legislators.

‘Chick-fil-A has a long, documented history of opposing same-sex marriage and supporting anti-LGBTQ legislators and organizations,” Venezia said in the report. “I implore the New Jersey Turnpike Authority to reconsider this decision and to instead choose a restaurant that is more in line with our values.”

Venezia further said he would speak with state legislators in an effort to keep Chick-fil-A out of Bloomfield.

Chick-fil-A did not respond to requests for comment regarding the move.

Chick-fil-A is known for adhering to Christian values, including closing its locations on Sundays.

The policy was enacted by its founder, S. Truett Cathy, a devout Southern Baptist, who built the company on biblical principles.

“We’re in business to glorify God by being a faithful steward of all that’s been trusted to us and to have a positive influence on all who come in contact with Chick-fil-A,” Trudy Cathy White, Truett’s daughter, previously told The Christian Post.

Turnpike Authority officials said in a statement that Chick-fil-A restaurants are a “fixture at service areas throughout the country.”

“The Turnpike Authority expects that anyone doing business in its service areas will treat all patrons with respect and will abide by the standards of the New Jersey Law Against Discrimination,” officials said, NorthJersey.com reported.

The Turnpike Authority said it expects construction to be complete on the new building at Brookdale South in 2023.

More than 1,400 people signed a change.org petition asking the Turnpike Authority to ban Chick-fil-A from the Garden State Parkway.

“Chick-fil-A imposes its religion on employees, customers and operators and as a publicly funded entity, the New Jersey Turnpike Authority should not allow this type of business to operate on the Parkway,” the petition states. “This restaurant chain would be an affront to all of the citizens of New Jersey that make up the tremendous diversity that makes our state such a great place to live.”

If the Turnpike Authority fails to “satisfactorily address” the issue, the petition’s author, William Courson, said it would call on Governor Phil Murphy to overturn the decision to bring Chick-fil-A to Bloomfield.

Cynthia Newman resigned as dean of the College of Business Administration of Rider University in 2019 becuase of the college’s decision to not bring a Chick-fil-A on campus.

“I’m a very committed Christian, and Chick-fil-A’s corporate purpose statement is to glorify God and to be faithful stewards to all that’s entrusted to them and have a positive influence on anyone who comes into contact with them,” Newman said in 2019. “I would say that mirrors my personal beliefs perfectly.”

Rider University students voted in a 2019 survey for a Chick-fil-A restaurant to open on campus. Rider officials subsequently sent another survey to students that excluded Chick-fil-A from consideration, “based on the company’s record widely perceived to be in opposition to the LGBTQ+ community,” the university said.