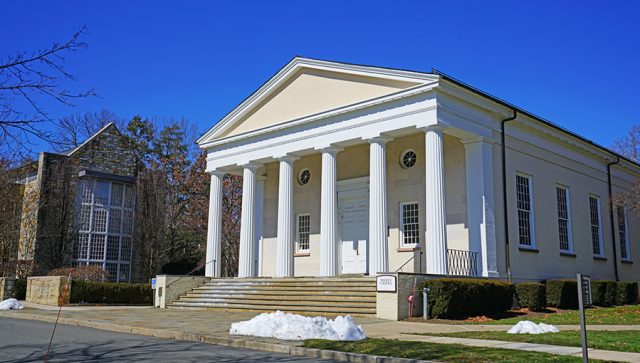 Princeton Theological Seminary’s board has unanimously voted to dissociate the name of slaveholder and anti-abolitionist Samuel Miller from the school’s chapel.

The decision Tuesday (Jan. 25) follows actions by the seminary’s Association of Black Seminarians and allies, who authored a petition and held demonstrations asking the board to rename the chapel.

“The board has made a heroic and historic decision that they came to after prayerful and careful deliberation,” Princeton Theological Seminary President M. Craig Barnes told Religion News Service. He added that the ABS played a “leading role” in the board’s decision by rallying the student body.

Going forward, the chapel will be known as simply the Seminary Chapel. The board also announced it will establish a task force made of students, faculty and alumni that will be charged with developing a rubric for future names and honors assigned to seminary spaces.

On Dec. 1, the ABS and ally groups issued an official request with nearly 300 signatures asking that Miller’s name be removed from the chapel. Members of ABS and allies participated in a demonstration outside the chapel on Jan. 18, hosted a time of fasting and prayer and proclaimed they would not worship in the chapel if Miller’s name was not removed by Jan. 30.

After the board’s Tuesday decision, ABS hosted another demonstration on Wednesday outside the chapel, this time to officially remove the “Miller” sign there.

Miller was the second professor of Princeton Theological Seminary. He joined the seminary in 1813, and according to a 2018 report on the seminary’s early ties to slavery, Miller employed slave labor, including while he was at Princeton. The findings indicate that Miller did not consider slaveholding a sin and that he was a member of the American Colonization Society, which believed freed slaves should be sent to Africa.

In fall 2019, Princeton Theological Seminary pledged to spend $27 million toward addressing its ties to slavery via scholarships and other initiatives. At the time, ABS said the pledge fell short of the reparations that should be set aside from the school’s $1 billion endowment.

Since then, the seminary has named its library for Theodore Sedgwick Wright, the seminary’s first African American graduate, and has named its Black Church Studies center for Betsey Stockton, a missionary and educator who was enslaved by a Princeton president. The seminary has also dedicated 35 scholarships to the descendants of those who were enslaved and other historically underrepresented groups and appointed the first full-time director of the Stockton Center.

ABS says it will continue to push for transparency and accountability as the seminary works to address its historic ties to slavery.

“We hope that this decision serves as a catalyst for more action steps in the seminary’s journey of repentance and reconciliation,” ABS said in a Jan. 26 press release. “The student body remains unified and will continue in these efforts until their promises are fulfilled and Princeton Theological Seminary becomes a true ‘covenant community.’”