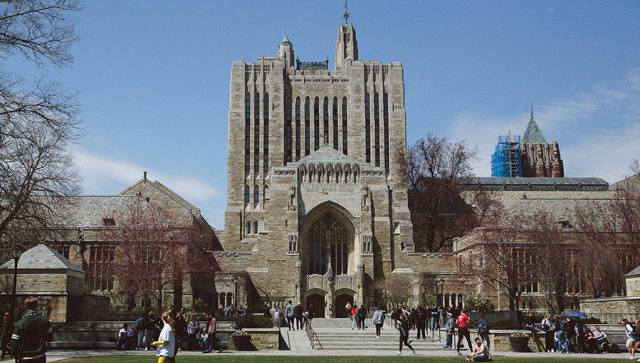 When Isaiah sees the glory of the Lord, his magnitude and power as just the hem of his garment filled the temple, he fell to his knees saying, “Woe is me! For I am lost; for I am a man of unclean lips.” (Isaiah 6)

Seeing the majesty of God does this to a person—we see our sin and smallness before his grandeur and goodness and we can’t help but bow before him. But God, being gracious and kind, desiring to see his kingdom come through us, makes his glory and power available to us through His grace. In response to receiving this grace, Isaiah says, “Here I am! Send me.” (verse 8)

In a small auditorium on Yale’s campus, the students of Christian Union Lux heard the story of a Yale alumnus who fell before the glory and splendor of the one true God and likewise said, “Here I am! Send me.” And God did indeed send him.

John Robb, Yale ‘70, spoke at Rooted, the leadership lecture series of CU Lux, about listening to the Lord’s voice, the power of prayer, and the need for Christian unity. A member of the “God Squad” at Yale, a zealous crew of young men who vigorously shared the gospel, Robb recalled how Campus Crusade for Christ (now Cru) had been barred from Yale due to a liberal chaplain, Viet Nam war politics had supercharged students, and the Black Panthers threatened campus with a bombing that sent the whole student body home before final exams. Though Robb’s era was full of its own tumult and godlessness, the God Squad studied the Bible, met for morning prayer, and relentlessly pursued their peers with the gospel.

In Robb’s time, Yale University, in spite of its beautiful heritage of student-led revival, was a place where God was mocked, students followed their desires, and intellectualism had rationalized God out of the classroom. The same might be said of Yale today, but just as the God Squad refused to be quiet about their faith, a faithful remnant remains today in the students of CU Lux; a remnant that Robb was deeply encouraged to see seeking the Lord, reaching out to their peers with the gospel, and earnestly desiring Christian unity. But even more importantly, fifty years after Robb’s tenure on campus—in a time of equal or even greater social upheaval, worldwide pandemic, and a heightened awareness of our world’s vulnerability and brokenness—the students of CU Lux are responding to the testimony of one faithful man who walked the halls of Yale before them.

Robb, who began in ministry as a missionary in Malaysia, is the founder of the Transformation Prayer Foundation, which supports prayer, humanitarian, and missions organizations throughout the world. The Transformation Prayer Foundation has taken Robb into countless war-torn and politically treacherous regions with the goal of uniting Christians in the area in repentance and prayer.

Robb argues that anytime a nation was divided, the church had been divided first. Working through the lens of 2 Chronicles 4:17, which says, “If my people who are called by my name humble themselves, and pray and seek my face and turn from their wicked ways, then I will hear from heaven and will forgive their sin and heal their land,” Robb has witnessed extraordinary breakthroughs in hopeless situations that led to reconciliation and peace agreements in miraculous ways.

When church leaders came together in repentance to love and forgive one another as brothers and sisters in Christ, the power of God was unleashed and their unity brought unity in the nation. Many times, Robb recounts praying together as the united body of Christ and sometimes seeing even the very next day peace agreements emerge out of unimaginable circumstances. Incredible spiritual revivals have also occurred as the Lord answered prayer and moved powerfully in many of the over one hundred countries where Robb has served.

But what about Yale? In the words of another prophet (Ezekiel 37), “Oh Lord, can these bones live?” Might Yale University be radically transformed by the power of the gospel through the unity of believers on campus?

After months in virtual classrooms and being separated from friends, the CU Lux community believes the answer is yes.

Students have returned to Yale with a hunger for revival on campus, an emphasis on prayer and the Word of God, and a desire to see Christian unity bring greater spiritual power to campus.

In a time when young people are less and less likely to identify as Christians, pastors are facing burnout, churches themselves are divided, and our culture considers the Christian faith to be oppressive and patriarchal, students at influential universities like Yale are the pilot-light for the Christian faith; the faithful few who still earnestly desire to behold the glory of the one true God.

Robb exhorted students to slow down, listen to the voice of God, and seek Christian unity on campus in order that believers’ spiritual power might be unleashed and the Lord might spiritually awaken their peers. It wouldn’t be the first time it has happened at Yale, and the students of CU Lux are earnestly praying for a powerful move of God on campus. As these faithful students devote themselves to prayer, Scripture, fasting, fellowship, and evangelism, join CU Lux in seeking the Lord for more and more students to fall before the majesty of the living God and respond, Here I am, Lord, send me.