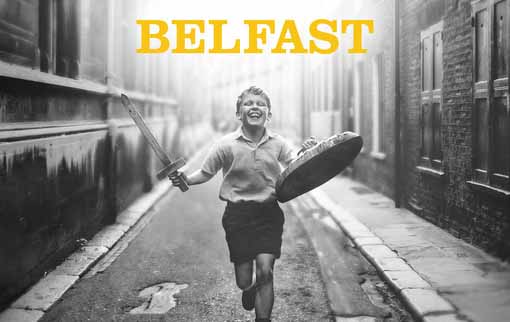 This article was reprinted with permission from www.movieguide.org, a family, biblical guide to movies and entertainment.

The film reflects Branaugh’s childhood growing up in Belfast. The actor, writer, and director said it is his most personal project.

“It’s about memory,” Branuagh said in a recent press conference. “The psychologist says the facts of our life are less important than how we remember them. And so I was remembering this with a decision to look through the eyes of a nine-year-old. I was remembering him from 50 years ago.”

BELFAST, starring Jude Hill (Buddy), Jamie Dornan, Caitriona Balfe, and Judy Dentch, was recently nominated for seven Academy Awards (including Best Picture), According to Movieguide’s review, “BELFAST is a beautifully crafted drama about the lives of a young boy, Buddy, and his Protestant family in the Northern Ireland town during the Fall and Christmas of 1969. It’s a time of social upheaval when tensions between Protestants and Catholics break out into violence…BELFAST is brilliant, life-affirming, dramatic, funny, and sometimes heartbreaking.”Branaugh noted that the movie also reflects the current struggle with COVID-19, which gave people and their families a unique opportunity to reflect on their lives.

“It came out of that silence that a lot of people stared into at the beginning of the [COVID-19] lockdown and it certainly sent me back to this other lockdown that we experienced, where the both ends of the street were barricaded,” Branaugh recalled. “You end up looking inward.”

“I think a lot of us did this during the pandemic and separated from things that were so familiar to us that we perhaps took for granted and particularly from people that we took for granted,” he continued. “I think it was a chance to look back. I wanted to shake hands with a 9-year-old kid.”

“I think that that readjustment involves dealing with some form of loss, which can be painful. And the result can also be beautiful, but it’s bittersweet,” he added.

Branaugh also noted that he watched the movie entirely differently with larger crowds on the big screen.

“I think it’s to do with maybe us not being fully put back together again, after what we’ve been through, there are still a couple of layers of skin missing. And maybe we need some emotional release. And storytelling has always helped provide that. We read to know that we are not alone. And this movie definitely, I think, tries to let people know that we need not be alone,” he said.

Notably, Branuagh decided to film the movie in black and white, hoping that people would connect to the characters on screen.

“The black and white was partly chosen for a forensic quality, something that Haris Zambarloukos, our cinematographer, put this way, he said, ‘Look, color, of course, allows you brilliantly to describe people, but black and white allows you to feel people. You take away some things that you might otherwise look at, and you look more closely at them.’ And I’ve always thought that it’s possible to make epic films in intimate situations,” Branaugh said. “And in cinema, the reason to invest in the big screen experience is that an epic dimension of black and white photography, on a massive screen is the human face.”