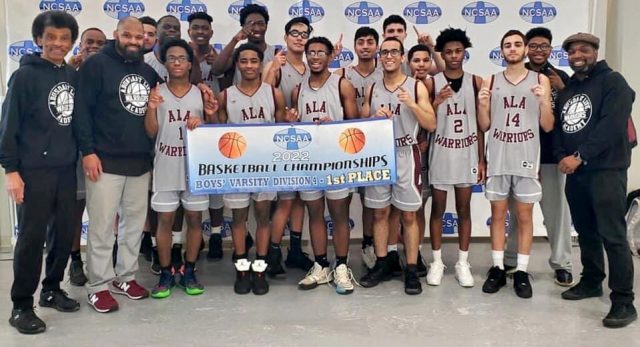 Coming into this season, few people outside of the Abundant Life Academy community believed in the 2021-22 boys’ basketball team.

But the school’s mascot is a Warrior. And that’s what they were. They fought until the end. And won. Now, they can be called national champions.

‘We Play For Him’

The Warriors capped an incredible, what some might call a Cinderella season on March 5 by winning the National Christian School Athletic Association Boys’ Varsity Group 4 Championship in Mt. Vernon, Ohio. They beat Veritas Collegiate Academy of Virginia, 79-76, in overtime on a long three-pointer at the buzzer by senior Maxwell Allen.

“I knew this team had something special. They fought through disappointment. They never gave up, and this is how they completed their season,” said John Kuebler, principal of Abundant Life Academy. “Congratulations to our student-athletes, Coach Malcolm Smith Coach LeNard Higgins, every parent, every teacher, team manager, our bus drivers and all who made this happen!”

Although quick to acknowledge the work of Smith, Higgins, and those closest to the team, Kuebler knows to whom the credit should ultimately go.

“To God be the glory!” Kuebler posted on Facebook following the win. “For we play for Him!”

The Warriors, who finished with a 24-3 record, play in the Metro Christian Athletic Association. They went 17-0 before losing their first game of the season to Belleville, 43-45. Before that game, Abundant Life was the only remaining undefeated boys basketball team in New Jersey. That fact was even more incredible when you consider that ALA is one of the smallest schools in the state.

“We’re an unknown school, but you have to start somewhere…” senior Chris DeFendre told NJ.com before the Belleville game.

Another highlight in ALA’s championship season was winning the Kearny High School Holiday Tournament in December. The Warriors defeated in-town rival Nutley and host Kearny en route to the title.

The young men who led ALA this season were DeFendre, Nathan Lima, Allen, Elijah Woodard, and Michael Ramdihol, all of whom are seniors. Juniors Anthony Testa, Darris Johnson, and Michel Valere also made major contributions. Johnson and DeFendre led the team in scoring. DeFendre and Johnson led the team in blocks and steals, respectively.

Related: How Sports Play a Role in Developing Christian Leaders

Smith told NJ.com earlier this season that the Warriors’ opponents may have underestimated them this season.

“People don’t really know about us, but when they play us, they say, ‘Wow. They can really play basketball,'” Smith told the website, who noted that he tries to instill confidence in his players.

“I played high school basketball, played in college, and played in Europe,” Smith said. “I’m trying to give these guys an avenue to understand that no matter where you are from or where you play, you can make it. I’m just trying to show them that it’s possible.”

The Verse That Drives Them

Abundant Life’s school verse of Isaiah 54:13 also plays a major role in the team’s success. It is painted on the wall in the gymnasium near the home team bench to the other side of the basketball court.

“Our goal has never been to be this elite sports program, but to give God glory with our athletic talents, to be witnesses, and to make disciples of the young men and women in our sports programs,” Kuebler said. “We’re going to be good sports and exercise good sportsmanship, win or lose.”

Kuebler attributed a major part of the team’s success this season was Smith’s discipline and how the players treated their opponents. Abundant Life’s teams dedicate their season’s to the Lord at pep rallies and pray at home games.

“You’ll see teams get big leads and start hollering. Coach Smith didn’t tolerate that,” Kuebler said. “We respect our opponents. Our team has been able to control their emotions and play hard. We have to credit our coach for that. There is a strong work ethic and there’s a strong amount of self-control on the team. We’re going to be good sports, win or lose.”

Good sports whether they win or lose, or even as national champions.