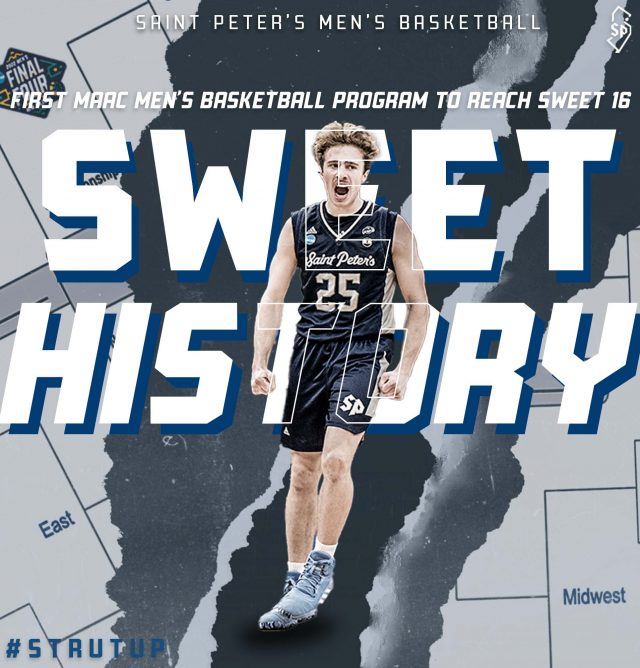 NEW YORK — March may be all about dressing in green and celebrating St. Patrick, but March Madness has been all about wearing blue and cheering on St. Peter’s.

Yes, as in the New Jersey-based St. Peter’s University in Jersey City located across the Hudson River from New York. The small Jesuit school reached the Sweet 16 on Saturday at the NCAA Men’s Basketball Tournament.

The Peacocks have been able to pull off a twin miracle over the past few days — first upsetting No. 2-ranked Kentucky in the first round and following that up this past Saturday with another bracket-busting win versus No. 7 seed Murray State.

“I’m just proud that these guys get to play on a different type of stage,” St. Peter’s coach Shaheen Holloway said about his team. “The NCAA Tournament is every kids dream, right?”

St. Peter’s, which was founded in 1872 and currently has 2,300 undergrads, is the latest Roman Catholic school to dominate the tournament in recent years. Of the 64 teams that made the tournament this year, 11 hailed from Catholic institutions of higher education. Of the 16 that remain in the tournament, four are Catholic colleges: Gonzaga, Villanova, Providence and St. Peter’s.

Baylor, a Baptist school founded in 1845, became the first Protestant school to win a men’s Division I basketball championship. The secret to Baylor’s success in 2021 wasn’t limited to a great defense and a hail of three-pointers. The secret lied in a culture called “Jesus, Others, Yourself.”

Baylor won the title by downing Gonzaga, who is among the favorites once again this spring to reach the Final Four.

St. Peter’s plays No. 3 Purdue this Friday in nearby Philadelphia — which will virtually be a home game for the Peacocks — for a shot at the Elite Eight. No matter what happens from here, the school has already made history. The Peacocks were only 12-11 on Feb. 20 and 0-3 all-time in the NCAA tournament. St. Peter’s is only the third No. 15 to ever reach the Sweet 16.

On Saturday night against Murray State, senior K.C. Ndefo, a forward, recorded a team-high 17 points and 10 rebounds in a 70-60 victory. The Peacocks also got another clutch night out of junior guard Doug Edert, who finished with 13 points.

St. Peter’s had marked one of the biggest upsets in tournament history two days earlier, on St. Patrick’s Day, with an 85-79 overtime win against Kentucky, traditionally one of the toughest Division I basketball schools in the nation.

The win earned the school praise from many in the basketball world, including Los Angeles Lakers legend Magic Johnson.

Last year’s Cinderella story during March Madness was Oral Roberts, a school founded by the Christian televangelist of the same name in 1963. The school, a 15 seed, managed to reach the Sweet 16 after eliminating No. 2 Ohio State and No. 7 Florida.

St. Peter’s closed in 1918 due to poor enrollment following World War I, but then all-boys college reopened 12 years later. The school became co-ed in 1966.

On its website, the school brags about its Jesuit identity, noting, “Pope Francis, the first Jesuit pope, made a historic journey to the United States from September 22 to September 27 (in 2015). In honor of his visit, Saint Peter’s partnered with the Association of Jesuit Colleges and Universities (AJCU) and the other 27 Jesuit colleges and universities in the United States to participate in and promote a campaign titled #JesuitEducated. The campaign involved media outreach, advertisements, social media promotions, online reflections from the community and more.”

“The job’s not done,” Holloway told the crowd.

Holloway, 45, who once starred at Seton Hall, lauded his players after the win against Murray State because of the effort the put in.

“These guys worked so hard for this moment,” he said. “I’m just proud of them.”