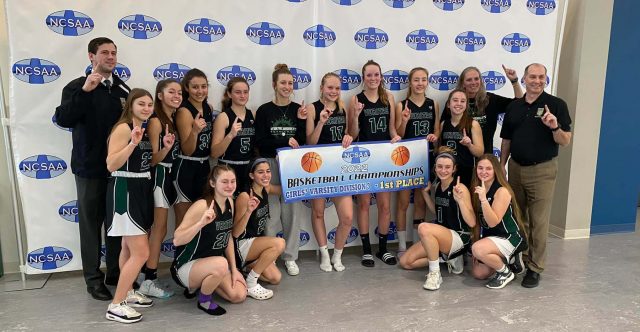 Seven minutes to go. Down 10 points. Championship game. Most basketball teams would be incredibly stressed in a situation like that. Not the Veritas Christian Academy girls team. They got comfortable. And they won.

Veritas, of Sparta, NJ, won the Division 3 title at the National Christian School Athletic Association Tournament in Ohio in March by defetaing the HRK Eagles of Illinois on a last-minute shot, 41-39. It was the first time Veritas won a national tournament.

“One of the goals we had this season was, when we were uncomfortable, to play comfortably, and we did,” said first-year head coach Armand Milanesi. “When there’s stress, we play through it.”

The championship was the end-result of a season that had it ups and downs. One of the players missed time because of illness. Opponents also put pressure on Milanesi’s daughter Charlotte, a four-year starter who scored her 2,000th career point in the national tournament semi-final game, and the team had to adapt.

“We had some really bad games this season. January was really the refinement period for us when we were really going through the fire outside of our league play. We measure our season against how do we against the larger public schools and during tournament time,” Milanesi said. “Our team has a level of excellence and each player has their own level of excellence.”

The team was led by Charlotte Milanesi and fellow seniors Mackenzie Meyers and Anna Torppey.

Aggressive play is what won Veritas the championship. Down 10, they battled back to take the lead in the final minute on a basket by Milanesi. With two seconds left on the clock, HRK had the ball under their basket for an in-bounds play. That’s when Milanesi blocked the last-second three-pointer.

“All game, I was very pleased how we were executing in a half-court set, but we knew we needed to get out in the open court and push the peace to make up the gap,” coach Milanesi said. “That was our style, and our girls simply dug in and executed perfectly. They never gave up. They pressed toward the mark and it is such a blessing to see.”

This season, Veritas looked to Philippians 2:1-5 for inspiration, especially the Apostle Paul’s exhortation to imitate the humility of Jesus Christ.

“There were three points from those verses we emphasized: Be an encouragement to each other, be selfless, and be unified,” Coach Milanesi said. “And we were.”