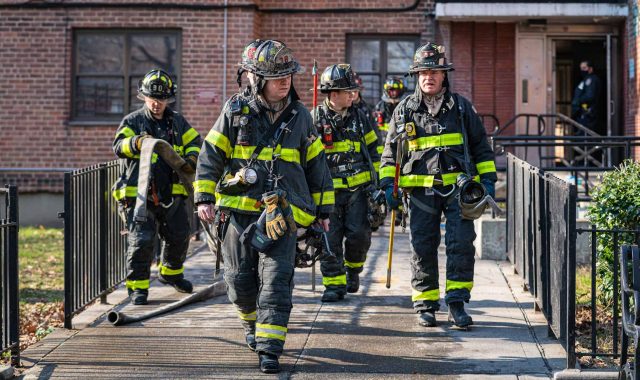 Shutterstock Photo: Firefighters on duty in the Bronx

With yet one more executive fiat, our mayor, his honor Eric Adams, captured what is wrong with the political class of our city. The mayor, without the City Council taking a single vote and without one single session at the bargaining table with NYC’s powerful unions, declared at Citifield that entertainers (and only entertainers), were exempt from the Covid 19 vaccine mandate. No science was cited or used in this decision. The mayor admits to being lobbied by the former Speaker of the Council, Corey Johnson. The only thing that mattered was the dollars that could be potentially lost or gained. I guess we can call this a religious exemption because the elites of our city worship the Almighty Dollar.

Perhaps we need to take a moment to clarify what our values should be. To be clear, one firefighter or one cop or one emergency worker or one nurse is more valuable to this city we love than a whole baseball team, a whole basketball team, or an entire theater troupe. Those of us New Yorkers who really remember 9-11, I mean really member it, spell hero F-D-N-Y and N-Y-P-D or E-M-S, not N-E-T-S or Y-A-N-K-S or even M-E-T-S.

Those of us who have been on the ground during covid spell greatness R-N or E-M-S or M-T-A. When we are in trouble in this city, we don’t dial 1-(800)- ticketmaster, but 9-1-1. And when we do dial 9-1-1 we don’t ask for Aaron Judge to come and run the bases, but we ask New York’s Bravest to run into a burning building. We don’t ask the operator to send Kevin Durant to take a shot. We ask for New York’s Finest to get shot at.

Our city fired, took away the ability to make an honest living, for many first responders. Our city forced into retirement or let go essential workers like teachers and health care workers in the name of a one-size-fits-all solution called a vaccine just a few weeks ago. Many have moved to other cities and states. They only left New York City because New York City left them. They had our back, but the leaders of this city never really valued them. A few weeks ago, the mayor proved that.

We are now cuddling entertainers/athletes because the powers that be got lobbied or maybe worse, returned a financial favor. The men and women of one whole firehouse make less money in a year than Kyrie Irving makes in a couple of weeks. A rookie cop makes less in a year than Gerritt Cole makes per inning pitched. These public servants should be compensated with a lot more respect and dignity than they have been afforded.

Mayor Adams, your actions in this matter define what arbitrary and capricious are. Your actions send a horrible message to our youth about who and what is important. Beyond that, these actions are a slap in the face to the essential workers who served and who continue to serve our city. The convictions regarding the vaccines of our entertainers are not more valid than those of our public servants, are they? Shouldn’t we make exemptions for the essential workers we really need rather than the entertainers we don’t have to have? Mr. Mayor, who is more valuable? Your Honor, end the mandates and rehire the fired workers. Right the wrong! Your credibility and much more is on the line.

Dr. David Watson is the senior pastor at Calvary Chapel Staten Island. This article was reprinted from his blog,  https://nycshepherd.com/.