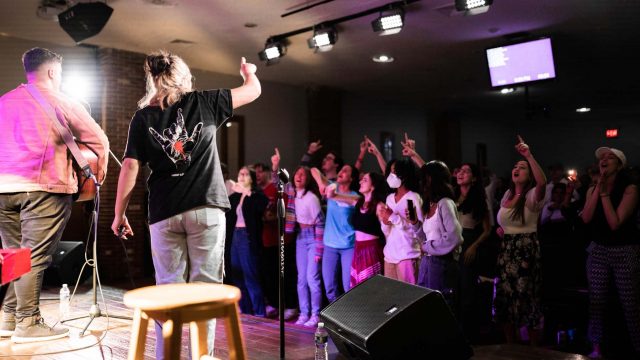 On the evening of Friday, March 18, 2022, a crowd of young people filled up Park Slope Tabernacle, a local church in Brooklyn. During the event, not one person over the age of 22 stepped foot on stage. The entire event was put on by young people for young people.

As the 22-year-old gospel presenter for the night, Forrest Limon, put it: “I saw a thirst be quenched in New York City’s youth, only to begin a life-long journey of following the Lord. It was special and unforgettable.”

This event was part of a string of events put on by HowToLife Movement, a Gen Z ministry and nonprofit organization. The mission of HowToLife is to “Reach, Disciple, and Mobilize Gen Z young people for Christ in North America and Around the World.” This is accomplished through their unique model for evangelism. HowToLife reaches out to local student leaders and helps them build a team, set a budget, and plan an event. Then, the event is run and fundraised by local young men and women.

And on March 18, New York City locals brought HowToLife to the Tri-State area. Over 225 people attended the event, including attendees from all five boroughs of New York, New Jersey, and Connecticut.

As the worship coordinator Daniel Ribero put it, “I saw God move in reviving the youth of the city and breaking through barriers that have been known in this city whenever evangelism occurs.”

HowToLife Movement, based in Minneapolis, Minnesota, was founded by Jordan Whitmer. There have been over 110 events in 23 states and six countries. Jordan is the grandson of Ron Hutchcraft, an evangelist, speaker, author, and contributor to Tri-State Voice.

On the morning of the Brooklyn event, Jordan spoke at the Bergen County Chapter of the New Canaan Society at the Brick House in Wyckoff, NJ, sharing insight on reaching Gen Z. He claims that much of HowToLife’s core philosophy comes from his family experiences. “I grew up in a family very passionate about mobilizing people to reach people like them. I saw this growing up through my family’s work with mobilizing Native American young leaders. I am deeply passionate about mobilizing next generation leaders to reach their peers, as people tend to listen to people like them.”

Jordan is specifically passionate about Generation Z — people born between the years of 1997 and 2012: “According to Barna, only 4% of Gen Z has a biblical worldview, making Gen Z the least Christian generation in American History. It is vital that we do something to help. That is why we do what we do in reaching, discipling, and mobilizing Gen Z for Christ.”

You can find a recap video of the event here.

Editor’s note: Blake Whitmer, a junior at Dartmouth College and intern for TriStateVoice.com, is the brother of Jordan Whitmer.