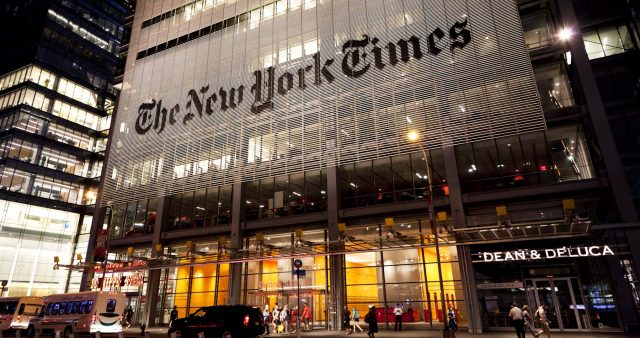 On April 8, 1966, the pictureless front cover of Time Magazine asked a bold and direction question: “Is God Dead?” This was just two days before Easter Sunday, and in the decades that followed, it became increasingly common for anti-God, anti-Jesus, anti-Bible essays to be featured in various secular publications at this time of year.

Now, in keeping with this anti-God attitude during this sacred season, an April 15 op-ed piece for the New York Times was headlined, “In This Time of War, I Propose We Give Up God.”

How deeply sensitive for the Times to post this anti-God essay on the day which is both Good Friday on the Christian calendar and the first day of Passover on the Jewish calendar! What a nice touch, editorial department! You have really outdone yourselves this year. (And a special shoutout to Liana Finck for her graphic, depicting God as an angry, Godzilla-like giant, marching through the city with terror on his mind.)

The author of this op-ed is Shalom Auslander, who was raised as an ultra-Orthodox Jew in Monsey, New York before losing his faith. But even as an 8-year-old boy, he was troubled by aspects of the Passover narrative in which God poured out his plagues on the Egyptians.

That’s because it was “not just Pharaoh and his soldiers” that were afflicted. Instead, “Egyptians young and old, innocent and guilty, suffered locusts and frogs, hail and darkness, beasts running wild and water becoming blood…”

As for Pharaoh’s hardness of heart toward God and Israel, how was that his fault, since God was the one hardening him?

As for God smiting the firstborn sons of Egypt – meaning, the firstborn of people and of cattle – what could be more barbaric than that?

“If he were mortal,” Auslander opines, “the God of Jews, Christians and Muslims would be dragged to The Hague. And yet we praise him. We emulate him. We implore our children to be like him.”

Really now, what were we thinking?

He continues, “Perhaps now, as missiles rain down and the dead are discovered in mass graves, is a good time to stop emulating this hateful God. Perhaps we can stop extolling his brutality. Perhaps now is a good time to teach our children to pass over God — to be as unlike him as possible.”

And then, having kicked God out of our lives, “we should open throw our doors open – to strangers. To people who aren’t our own. To the terrifying them, to the evil others, those people who seem so different from us, those we think are our enemies or who think us theirs, but who, if they sat down around the table with us, we’d no doubt find despise the pharaohs of this world as much as we do, and who dream of the same d—-d thing as us all:

Having followed the stories of former, ultra-Orthodox Jews, I do understand how they can be so resentful of their upbringing that they throw out the baby with the bathwater, unable to separate human traditions from the God of the Bible.

In this case, however, Auslander would counter that it is the God of the Bible whom he so opposes and rejects. We need to be liberated from Him!

But if there is no God and we are simply the products of an unguided evolutionary process (rather than being created by God in His image), there would be no such thing as justice. Or goodness. Or absolute morality.

As C. S. Lewis reflected on his mindset as an atheist, “My argument against God was that the universe seemed so cruel and unjust. But how had I got this idea of just and unjust? A man does not call a line crooked unless he has some idea of a straight line. What was I comparing this universe with when I called it unjust? If the whole show was bad and senseless from A to Z, so to speak, why did I, who was supposed to be part of the show, find myself in such violent reaction against it? . . .

He continued, “Of course I could have given up my idea of justice by saying it was nothing but a private idea of my own. But if I did that, then my argument against God collapsed too — for the argument depended on saying that the world was really unjust, not simply that it did not happen to please my private fancies. Thus in the very act of trying to prove that God did not exist — in other words, that the whole of reality was senseless — I found I was forced to assume that one part of reality — namely my idea of justice — was full of sense. Consequently atheism turns out to be too simple. If the whole universe has no meaning, we should never have found out that it has no meaning: just as, if there were no light in the universe and therefore no creatures with eyes, we should never know it was dark. Dark would be without meaning.”

Auslander’s moral outrage actually undercuts, rather than supports, his whole argument against God.

He also seems to ignore the massive revelation of God’s patience and kindness and longsuffering and compassion found throughout the Bible and how He sternly judges those who take advantage of  the orphan, the widow, the needy, and the stranger. Is the Lord really that schizophrenic, slaughtering the innocent with glee one moment and then grieving over the suffering of orphans the next? The Scriptures even declare that He takes no pleasure in the death of the wicked but desires rather that they repent and live (see Ezekiel 18).

Even apparent injustices like the hardening of Pharaoh’s heart disappear upon closer examination of the Hebrew text. (For my video on this, see here.)

And what of the Lord’s ongoing mercy and compassion towards us? Do any of us with a recognition of the failings of our own heart dare to rail against God? Would any of us dare to stand before Him on judgment day and say, “Give me exactly what I deserve?”

Not only so, but for the Christian, the fullest revelation of God is found in the cross, where His own Son voluntary died a shameful, agonizing, death to spare us from final judgment. In the words of philosopher John Kreeft, “We sinned for no reason but an incomprehensible lack of love, and He saved us for no reason but an incomprehensible excess of love.”

It is my prayer for Mr. Auslander (and others who share his sentiments) that they will personally encounter the boundless love of the heavenly Father. Once we truly come to know Him in a personal and intimate way, even if we don’t get answers to all our questions, we will get the thing Auslander is after: peace – peace with God, peace with ourselves, and peace with one another.

As for Time Magazine, just 5 years after that infamous, 1966 cover (with the lead article declaring that God was, in fact, dead), circumstances compelled Time to put out a very different cover story. So it was on June 21, 1971 that Time’s cover announced, The Jesus Revolution.

I came to faith that very year as a heroin-shooting, LSD-using, 16-year-old, Jewish, hippie rock drummer, one of countless thousands like me around the world. God was anything but dead!

I sense that He is about to reveal Himself afresh today. The story might even make it to the front page of the New York Times! Be assured that He is not going away.

(If you are struggling with some of the questions raised by Auslander, I have written two books you might find helpful. See here and here.)