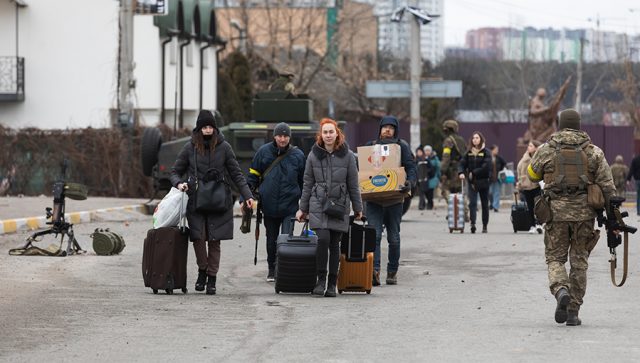 Editor’s note: This was reprinted with permission from Christian Union: The Magazine.

It seems like foolishness to trust in a God you cannot see when missiles are landing in your neighborhood, tanks roll down your street, and you decide to flee for your life. It seems like foolishness to believe God is with you when war is tearing your home country apart, bodies lie in streets, and you no longer have a home to return to. But as Kateryna Bila posits, what is truly foolishness is to trust in your comfort, your possessions, your sense of security and control—those can all be taken away in an instant.

Bila was alone in Kyiv when the bombs began to fall. The twenty-two year old was in her flat when she felt the earth tremble and heard the missiles streak by. In the middle of the night she heard men trying to break into her building. The next morning she fled.

When you’re running for your life, Bila said, “you can’t afford to be emotional, you have to be rational.” But for Bila, what was rational was to trust in the Lord: To rely on the prayers of her mother and pastor even though they also warned her that her flight would be dangerous; To believe the still, small voice that told her she would be ok; To hold fast to the promise that Emmanuel, God with us, was with her.

Bila’s flight was like that of many Ukrainians who fled the capital city when the war began three months ago. She left with almost nothing, mere scraps of a plan, and set out into the unknown.

Early in the morning she spent hours trying to find a taxi to the train station because the petrol stations had run dry. When she finally made it to the train station, she waited with hundreds of others in the hopes of boarding a train to Poland or western Ukraine. While she waited, missiles fell from an air attack nearby throwing the would-be passengers into a panic. Finally a train came but passed them by because there were too many people wanting to board. The train was already filled with others trying to escape the war.

Four hours later, in the freezing cold, another train arrived and she boarded, traveling to Western Ukraine. From there, with merely the clothes on her back, she traveled to a Romanian border city, then to Bucharest, to Amsterdam, and finally to New York City.

Oh, the depth of the riches both of the wisdom and knowledge of God! How unsearchable are His judgments and unfathomable His ways! For who has known the mind of the Lord, or who became His counselor? – Romans 11:33-34

Weeks before her flight to New York City, the Lord had been preparing Bila, moving in ways unrecognized, quietly laying out the plans He had for her. She didn’t know it yet, but He was paving the way for her to connect with believers in New York, find a home, and the support she would need after fleeing the war.

Knowing that she would be going to Manhattan for a two-week conference with the United Nations this spring, Bila had searched for Christian organizations in the area and found Christian Union. She connected with Karen Hetzler, the Assistant Ministry Director of Christian Union New York, and was particularly interested in Christian Union’s mission to develop Christian leaders at prestigious universities in the States.

“I believe that God prepared the bases for me and opportunities for me, even the connection with Karen prior to war. I had done my own research of Christian organizations and she was the only person I wanted to contact for whatever reason,” recalls Bila.

Bila attended the National University of Kyiv-Mohyla Academy, a top university in Kyiv, but in Ukraine there is almost no Christian presence on most university campuses. The work Christian Union does to share the gospel in prolific ways, train students in Scripture, theology, and discipleship are incredibly rare in Ukraine.

What began as an email exchange became instrumental as Bila found herself in New York City with no money, no connections, and no survival plan. She reached out to Hetzler who immediately called together a support system of Christians in the city, connecting Bila to a church and other believers who would take in the young woman, provide food and clothing, and help her begin a new life.

Bila reflects on how the Lord led her to Christian Union weeks before the war even began: “Those decisions that we could consider to be irrational could be rational for God…It is important to develop trust in God…and [be] strengthened through His power.”

Indeed God is always at work, whether we recognize and acknowledge it or not. And, as in most cases, He chooses to use His Body, the Church, to protect, provide, and care for those like Bila, now a refugee in a new country. But this wasn’t the first time that the Lord used the church to provide for her needs.

When Bila was just eighteen years old and beginning university in Kyiv, she suffered under an enormous amount of stress and exhaustion. It was a local pastor who noticed her and began to invite her to church and care for her. It was that year that she became Christian and the Lord healed her physically.

Originally from Crimea, Bila desired to get away from the Russian educational system, so she opted to complete two secondary education programs concurrently, one in Crimea and the other just across the border in Ukraine. The schedule was grueling and during the exams period she took exams in Crimea, boarded a bus across the border to take another set of exams in Ukraine. The journey lasted ten hours and she did it every day for two weeks so that she might be able to attend university in Ukraine.

But this season of difficulty, leaving her parents in Crimea, and setting off on her own in Kyiv took its toll. She lost an enormous amount of weight and a doctor told her her heart could literally stop at any point because she was so physically run down and weak. It was here that she met a pastor, met Jesus, and gave her life to Christ.

Four years later, Bila attributes her escape from Ukraine entirely to the Lord and is confident that her relationship with Him was what sustained her through her weeks-long journey across the globe.

Praise God that He is always at work, that His Spirit leads and guides us, that the Church actually serves as His hands and feet today, and that in Christ we have access to the only solid rock on which we can build our lives.

To learn more about Christian Union’s ministry in New York City and at some of the nation’s most influential universities, please click here.