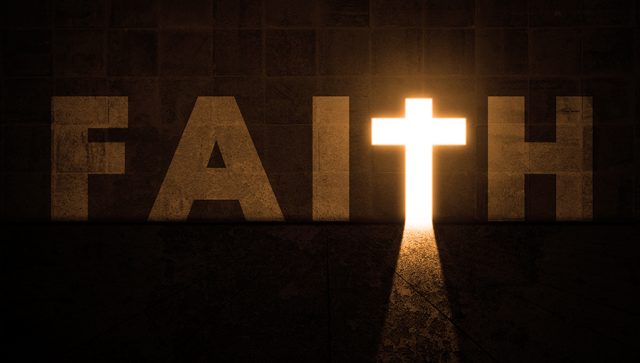 Here are a few familiar scriptures about faith:

“And without faith it is impossible to please God, because anyone who comes to Him must believe that He exists and that He rewards those who diligently seek Him.” (Heb. 11:6)

But what more can we say about faith?  And is it possible to measure it?

For twenty-one years I worked at a northern New Jersey research and development facility called Picatinny Arsenal. Every morning, while driving to work, I would come to a circle. Somewhere around that circle, at about the same time every morning, I would usually see the sun. There were times, however, that there were so many clouds in the sky that the sun was blocked from my view – but I knew it was still there.

As Christians, there will be times in our life when troubles, trials, the stress of a situation, a prayer that goes unanswered for a long time, or even the injustice we see around us, will block our clear view of Christ. Be assured, He is still there. Bacause, “God has said, ‘Never will I leave you; never will I forsake you.’” (Heb. 13:5).

He is always working things together for the good of those who love Him (Romans 8:28). At those times, He is still faithfully waiting to commune with us.

Here’s the way to spell FAITH: FORSAKING ALL I TRUST HIM.

Now, about measuring faith… Is there really a way to measure it? How do we observe faith? Remember this definition: faith is our response to God’s love. It’s what we do – not just what we say. The Scripture tells us not to be just hearers of the Word but doers! (James 1:22).

Jesus laid down His life for us. And we show our faith in Him by laying down our lives for the brethren. (1 John 3:16). “Dear children, let us not love with words or tongue but with actions and in truth.” (1 John 3:18). “What good is it, my brothers, if a man claims to have faith but has no deeds? Can such faith save him? …In the same way, faith by itself, if not accompanied by action, is dead.” (James 2:14-17)

So, we can measure and observe our faith by our deeds.

And I think at the Judgment Seat of Christ (2 Corinthians 5: 10), that’s the way He will determine rewards for us believers. It’s like the parable of the talents (Matthew 25: 14-30) and the minas (Luke 19: 11-27).  The master said to his servants, “Put this money to work, until I come back.” The master gave money to His servants to invest. Two out of the three had faith [weren’t afraid] to do something with the money and multiplied it, while the other one feared losing the money and buried it. The first two were rewarded.  The other wasn’t.

We’ve received gifts from the Lord to invest in His work. By faith, trusting in His strength, we use our time, talents, and treasure to grow His kingdom.

About 47 years ago, when I lived in Germany, I met a missionary to the troops there. At one of his meetings, he told a sailor [without asking me] that I would be glad to teach a bible study for him and his friends. I was scared to do it, but I trusted the Lord would help me. For me, that began a lifetime of teaching His Word. And I am so grateful for all the opportunities the Lord has given me, in churches, conferences, retreats, and other venues – the abundant life of serving God by serving His people. All of it because of that first step of faith to trust Him.

Once, when Jesus was in a boat with His disciples, He judged their faith as falling short.  Here’s how it happened:

“Then He got into the boat and his disciples followed Him. Without warning, a furious storm came up on the lake, so that the waves swept over the boat. But Jesus was sleeping. The disciples went and woke Him, saying, ‘Lord, save us! We’re going to drown!’ He replied, ‘You of little faith, why are you so afraid?’ Then He got up and rebuked the winds and the waves, and it was completely calm.” (Matthew 8:23-26).

Their response [and ours] in the storm should have been to believe and trust Christ.

On another occasion, Jesus told His disciples that with just a mustard seed of faith, nothing would be impossible for them. They could move and remove mountains. (Matthew 17:20). Faith sees past the mountains – past all obstacles – and believes that what is hoped for is there beyond the mountain just waiting.

So, faith keeps on going, persevering when others have quit trying, believing the goal is attainable – the prize is just one more short step ahead. If those clouds weren’t there, the Sun [or the Son] would be revealed – because He is faithful, and His promises are sure.

Forsaking All I Trust Him! That’s F.A.I.T.H.

As a teacher, author, columnist, and president emeritus of New Jersey Christian Ministries, Jim Biscardi has been “privileged for many years to help Christians grow in their knowledge of Christ.” You can find his books at barnesandnoble.com or amazon.