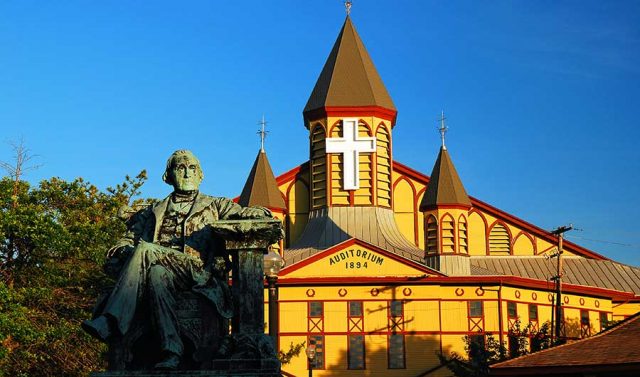 Photo: A statue of Ellwood Stokes, the founder of Ocean Grove, stands in front of the historic Great Auditorium

Every summer, the Ocean Grove Camp Meeting Association is a hotspot for religion and recreation. It is a rare place where Christians can be rejuvenated both spiritually, through worship and studies, and physically, as the crisp ocean air wafts into the well-ventilated great auditorium. As the Summer 2022 season begins, now is a great time to reflect on the history of this unique place.

Ocean Grove’s founding dates to the nineteenth century during two broad cultural movements. The first of these was the Camp Meeting Movement, which began during the Great Awakening among various protestant denominations. This movement featured people coming together to meet in tents to pray, worship, and commit their lives to Christ. The second of these cultural movements is the Holiness movement, which called Christians to live a holy life of modesty, obey strict Sabbath observance, and abstain from alcohol. The Ocean Grove Camp Meeting Association occurred at the intersection of these two movements, being one of the nation’s first Holiness camp meeting associations.

Over 150 years later, these historic movements still influence the culture of Ocean Grove. In the words of OGCMA President, Michael Badger, “Each summer many families tell me how much they love that our beach is different. They are glad that they don’t have to hear loud inappropriate music while they are trying to read a book or take a nap on the beach. There is conscientious effort to keep alcohol, tobacco, and marijuana off the beach and to keep your day at the beach enjoyable and restful.”

OGCMA’s history officially began in May of 1869, when Methodist ministers were looking for a spot where “religion and recreation should go hand and hand.” This led them to a beautiful patch of trees with few mosquitoes. Within a week, tents were pitched. Soon, construction on permanent buildings began, and by 1870, the area had a charter from the New Jersey State Legislature. Today, this land still stands as “God’s square mile at the Jersey shore.”

As many camp meeting associations from the 19th century have closed, the OGCMA has lasted into the 21st century. When asked how Ocean Grove managed to continue when so many camp meeting associations did not, President Badger cited Ocean Grove’s “unbroken commitment to its founding mission. The OGCMA was created to be a permanent camp meeting and Christian seaside resort. For over one hundred and fifty years we have continued to provide opportunities for spiritual birth, growth, and renewal.”

The Ocean Grove Camp Meeting Association continues its glorious history this summer. For a full schedule of events, including Camp Meeting Week and the the 68th Annual Choir Festival, visit www.oceangrove.org.