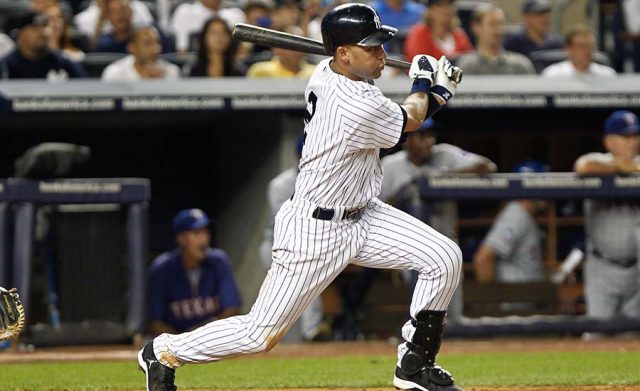 NEW YORK — Yankee Stadium was packed to the rafters. The place was as loud as it typically would get when the New York Yankees played in a World Series game. But this wasn’t the World Series. This was a 2014 regular-season game.

Jeter — in his final at-bat before a sellout crowd of 48,613 that Sept. 25 — hit a game-winning single. The Yankees defeated the Baltimore Orioles 6-5.

While in the on-deck circle, Jeter said he prayed for one more big hit.

“Before I took my last at bat,” Jeter wrote in his autobiography “Unfiltered” that was released in the fall of 2014, “I kneeled and prayed the way I always have. But this time my prayer was a little different. I said, ‘God, if I have one more big moment in me, now is the time.’”

For an athlete who always prided himself for his privacy, this admission was a glimpse into Jeter as a religious man. Jeter spent his entire 19-year career with the Yankees, winning five World Series titles. The shortstop also won five Golden Gloves, made 14 All-Star appearances and was named American League Rookie of the Year in 1996. The team retired his No. 2 jersey in 2017. He was elected to the Baseball Hall of Fame in 2020.

Jeter, now 48, is the focus of a seven-part ESPN documentary called “The Captain.” The first two episodes have already been released. The rest of the episodes will come out between now and Aug. 11. The series will delve into how race affected Jeter — who has an African American father and a White mother — as a child and his journey into how he went from teen baseball prodigy into one of the greatest ballplayers of the 1990s.

Before he became a superstar and one of New York’s most-beloved sports icons, Jeter grew up going to Catholic schools. He later started a scholarship titled the Derek Jeter/St. Peter Claver Catholic School Scholarship in Tampa, an indication that he still has a connection to his Catholic roots.

This is a side of Jeter many don’t know. The documentary shows video footage from Jeter’s baptism. It also recalls how Dot Connors, Jeter’s maternal grandmother who lived in New Jersey, was a die-hard Yankees fan who also had a statue of the Virgin Mary on her lawn. Otherwise, the first two episodes fail to delve into Jeter’s faith. It remains to be seen if the remaining five do.

Jeter grew up Catholic in Kalamazoo, Michigan, and spoke about his faith in a 1997 interview with The New York Times. It was one of those rare moments over 20 years in New York that Jeter opened up to the sports media.

“I think people might feel a mystique about me because they don’t know what I am,” he said at the time. “I heard I’m Italian, Jewish, Spanish. They don’t know if I’m White or I’m Black. Maybe that’s it. My dad is Black, my mom is Irish and I’m Catholic, so I hear everything. I’m in New York and there are all different people, all races and religions. I can relate to everyone.”

Jeter’s parents — Charles and Dorothy — had met in 1972 in Frankfurt. The two were stationed in Germany with the U.S. military. The documentary reveals that they raised Jeter in a loving family, despite having to endure racism as a result of being an interracial couple. Both taught Jeter the importance of humility, hard work and perseverance.

African American Catholics have long celebrated Jeter, who sometimes wore a rosary under his pinstripe uniform.

Nate Tinner-Williams, co-founder and editor of Black Catholic Messenger, pointed out last year following the ballplayer’s induction into the Hall of Fame, “Jeter himself is a Black Catholic, having been raised in the faith from childhood.”

The post goes on to document Jeter’s career and encounter with baseball legend Hank Aaron, the one-time home-run king who had converted to Catholicism later in life.

In June, in a rare public update, Jeter wrote on Instagram: “The family is doing great. Three girls — almost 5, 3 and 6 months. So pray for me, man.”

However, Jeter, who really relished his privacy despite being under the media spotlight, became more notorious, as the documentary recounts, for his ability not to engage with reporters — especially when it came to stories about his relationship with teammates or what went on behind the scenes in the clubhouse.

“Their job is to get a headline,” Jeter said in the documentary of reporters, “and I wasn’t going to give it to them. My job was to make sure our team was prepared and ready, and the only thing that mattered to us was winning.”

Years earlier, in an interview with the local New York PBS TV program “Close Encounter,” Jeter gave another glimpse into his faith.

“I’m religious. I don’t try to push it off on other people,” he said. “Everyone has their own beliefs.”

In the same interview, he was asked if he had ever turned to God to ask Him the question why me?

To that, Jeter, with a smile across his face, replied, “I try not to because I don’t want him to change His mind.”