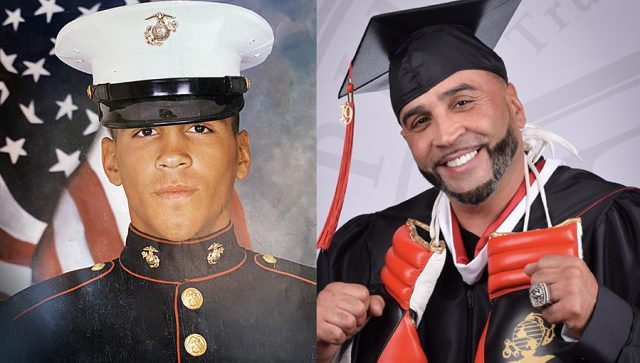 Pillar College’s first Zoom Information Session for military veterans and their families will be held on Wednesday, August 3, at 6 p.m. As Pillar College President Rupert A. Hayles, Jr. announced details of this special event, he expressed great honor and pride in the college’s continuing outreach to veterans and active service members. Dr. Hayles is himself a retired United States Air Force lieutenant.

As proud supporters of the GI Bill, Pillar College supports military veterans and their families by offering special discounts to spouses and children of military veterans, Gold Star Families, and to veterans who may no longer be eligible for veterans’ benefits. To sign up for this virtual information session, please go to pillar.edu/events.

Hosts for this virtual event include Pillar associate Vice-President Dr. Dominic DiGioacchino, as well as Pillar alumnus and Marine veteran Hector Cruz. Co-hosts of this Zoom session will welcome an audience that includes many of our military heroes. During this event, hosts will demonstrate and explain how features of the Pillar College learning model help students develop a Christian worldview.

Guests also will learn about the various academic programs Pillar College offers, as well as the school’s seamless application process and the special discounts it offers to veterans and their family members. Topics of discussion will include flexible class schedules; special academic advising and support services for veterans; free tutoring; and a wide range of career services.

During a recent interview, co-host Hector Cruz recalled how these same features helped him earn undergraduate and graduate degrees from Pillar College after his years of service in the U.S. Marines from 1986-1991 that included one tour in Operation Desert Storm and Desert Shield. In addition to his strong Christian faith, Cruz credits his success in college to Pillar’s small class sizes and its dedicated faculty and staff members who remain accessible to students.

Following his years of military service, Cruz worked at many jobs but found himself unable to develop a career path. Although he had been out of school for decades, he eventually decided to further his education. Diagnosed with PTSD (Post Traumatic Stress Disorder) and a learning disability, Cruz knew he faced a difficult road when he entered Pillar College in 2012. However, once he started school he quickly realized his calling was to help others, especially veterans who often find it hard to adjust to civilian life.

During his years on active duty, Cruz had been a two-time All-Marine Boxing Champion in 1989 and 1990. In 2016, he was inducted into the U.S. All-Marine Corps Boxing Hall of Fame. “I enlisted in the Marines via the delayed entry program in April 1986,” said Cruz. “After I was discharged in 1991, I held multiple jobs and went years undiagnosed with PTSD,” he recalled. “But in losing myself, I found my calling while earning two bachelor’s degrees and two graduate degrees from Pillar College. My calling is to minister to veterans,” Cruz said.

Pillar College is an undergraduate and graduate institution of higher learning, providing a Christ-centered education to persons of diverse backgrounds and traditions. Pillar is licensed by the New Jersey Commission on Higher Education and is accredited by the Middle States Commission on Higher Education (MSCHE). Classes begin this Fall, and it’s not too late to enroll!