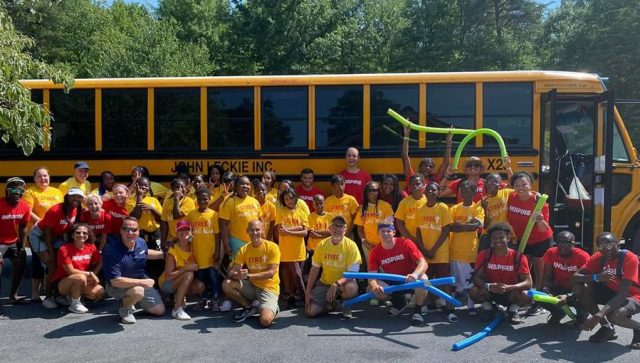 Twelve years ago, Kurt Schwarz founded Inspire Sports Camps with a vision “to see cities transformed one camper at a time.” The North-Jersey based ministry gives inner-city youth an opportunity to hear the good news of the Gospel, grow in their relationship with God, and have time to simply be a kid by playing outside, making new friends, and learning new skills.

Held this summer in Dallas, Pennsylvania in its first two weeks and Lebanon, Pennsylvania in its third and fourth weeks, this sleepaway sports camp has grown significantly over the years, impacting youth from nearly every urban center in the Northeast region of the United States. This summer, Inspire Sports Camps (ISC) hosted 639 attendees. The camps offer a wide range of outdoor and indoor activities—from sports like soccer and basketball, to arts and crafts, to ziplining, to several water based activities like swimming, canoeing, to a general favorite, the blob.

Recently, a group of campers at the soccer field were treated to a lesson regarding resiliency. Sports can have a great way of teaching young people how to overcome  through endurance. When asked about the values that soccer can have on these kids, a coach explained how this environment is brand new for a lot of campers, leading to plenty of challenges and failures along the way. This in turn could lead to a humbling experience, leading them to work harder and endure despite any setbacks.

According to Schwarz, one of the greatest highlights is seeing each of these campers slowly let their guard down. Many come from harsh home lives and environments that don’t allow them to be vulnerable with others, so it makes sense that they would be closed off at first. One camper, in particular, was even a victim of gun violence many years ago, but fortunately is currently doing very well according to the urban-based leader in that area.

Campers arrive from an inner-city environment to a much safer yet unfamiliar one, meaning they likely enter the campgrounds very closed off and understandably not willing to trust or talk to anyone, especially about heavy topics like God, the Bible, or what their home lives may be like. Over time however—as fun is had, friends are made, and campers and counselors grow closer together—those barriers begin to disappear. This was especially true on the very second night of this summer’s camp session. After a devotional about David getting anointed king when nobody else – not even his own family – saw his worth, dozens of campers – many who have never heard of God’s grace and good works – were left weeping at the idea of God loving them unconditionally. Even some counselors were there weeping right alongside them.

While ISC provides a golden opportunity for campers to learn more about God and grow in their faith, the counselors are arguably learning and growing just as much. Samuel Akinlolu, a second year counselor, said his counseling experience has expanded his capacity to endure and provided him with a deeper sense of service. When you’re in charge of a group of children, you’re going to, as Schwarz put it, “get stretched in ways you haven’t been before.” As great as it is to be able to lead and teach the future generations, the truth is that there will be moments that require plenty of patience, endurance, and prayer.

If you talk to a counselor after the first few days of camp, you may find them sounding like they have lost their voices, and that’s likely because they did due to constant shouting and cheering in an attempt to acquire the spirit stick, a prize given each day to the most enthusiastic and active cabin.

When asked about any hopes and expectations for her time as a counselor and for her cabin in particular, first-year counselor Lauren Larmanis made sure to bring up the born-again bell, a symbol of someone making the bold decision to commit their life to Christ. And this is the kind of life-changing experience Schwarz envisioned when he started Inspire Sports Camps—to provide experiences where underserved kids are allowed to simply be kids, while also being transformed into who God has made them to be.