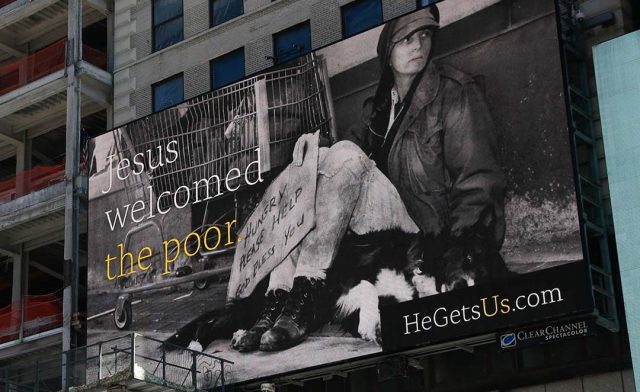 Photo: from Facebook page for the He Gets Us campaign

Have you seen some interesting ads about Jesus during prime-time television recently? Or on a billboard? Online? He Gets Us, an ad campaign that presents an unexpected and fresh take on Jesus’ life and experiences, launched nationally earlier this year. Recent ads could be seen in the New York market on prime-time television and during major sports broadcasts.

The campaign is believed to be the largest of its kind ever coordinated across TV, digital, radio, outdoor, and experiential platforms. The first round of ads garnered 32 million views on YouTube in just 10 weeks, and nearly half a million people visited HeGetsUs.com, a website where people can learn and interact if they so choose.

The nationwide effort, backed by a coalition of Christian donors, is seeking “to present Jesus’ story that is not institutional, political, or self-serving.” Organizers of the campaign wondered, “What if the biggest and best known brand in our nation was Jesus?” A spot called Anxiety, shows suffering and anxiety across various walks of life and culminates with a message that reads, “Jesus suffered anxiety, too.” Another ad, Wrongly Judged, follows a group of heavily tattooed youths as they roam the streets and, unexpectedly, bring food to the homeless. This spot appeals to our tendency to judge others — especially those we don’t understand. Jesus, too, was wrongly judged, the spot points out.

Dinner Party is a commercial in which diverse groups of people are invited to a gathering, but several invited guests choose not to attend because they can’t overcome the things that divide them. The organizer of the dinner party, who viewers come to find is Jesus, is heartbroken because he wanted people to share not just food and wine but also compassion for each other.

He Gets Us – Rebel Commercial:

He Gets Us came about after three phases of nationwide research conducted last year revealed that a vast swath of U.S. adults aren’t sure what they believe and that many associate Christianity with judgementalism, discrimination, and hypocrisy. Many feel Christians are against them; they witness politicians weaponizing the Bible and see gaps between followers of the faith and the words and teachings of Jesus. As a result, they’re skeptical about Christianity and the church.

RELATED: What Is Your “Why” Question?

“He Gets Us is disrupting misconceptions by pointing out how Jesus identified with the marginalized, how he didn’t favor the powerful, how he often offended the religious by associating with social outcasts, how he was wholly disinterested in political power as a means of furthering his movement, and how he actively challenged systems of oppression even though he knew it would cost him his life,” said Bill McKendry, founder and chief creative officer of Haven – A creative hub, the lead marketing and branding firm for this initiative and the convener of multiple specialty agencies working on the campaign, including research, creative, media, interactive, and public relations firms.

For the team behind He Gets Us, reaching the intended audience means meeting them where they are — including while they root for their sports teams, tune into media entertainment, and navigate information about world events — turning their notion of a “religious message” on its head with surprising and relatable moments. The campaign’s 17 video ads, plus a slew of radio, outdoor, and digital ads, showcase Jesus’ experiences, present them for consideration and enlightenment, and then encourage all to live out his example of radical compassion and love for others.

He Gets Us – Outrage Commercial: