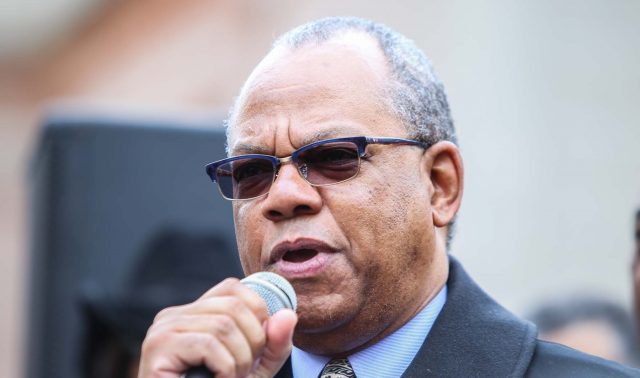 Editor’s note: The following article was reprinted with permission from ReligionUnplugged.com, an award-winning non-profit news organization, funded by TheMediaProject.org.

His first job at Harlem’s famous Abyssinian Baptist Church was as the youth minister. He went from counseling engaged couples to counseling the U.S. president, from the brothers in Harlem to advising diplomats at the United Nations.

That is why a long line has wrapped around the block of the megachurch over the last two days as the ordinary and extraordinary paid their final respects to Rev. Dr. Calvin O. Butts III. He died of cancer on Oct. 28 at the age of 73.

Vice President Kamala Harris and former president Bill Clinton were among the visitors.

Whether he was a preacher in his Sunday morning robes or sporting a three-piece suit, Butts spent more than 50 years at Abyssinian and he never left.

Rev. Marvin Andrew McMickle, who also came to Abyssinian in 1972, was Butts’ lifelong friend. He said that he and Butts agreed to preach at the other’s funeral depending on who died first.

Butts had a great impact on so many pastors and faith leaders like Rev. Derrick Harkins, the former Senior Vice President of Union Theological Seminary who is now Director of the Center for Faith-Based and Neighborhood Partnerships in the U.S. Department of Housing and Urban Development.

Harkins delivered the opening prayer during the funeral service and told ReligionUnplugged.com that “Calvin Butts was the epitome of bringing life to what the gospel means.”

“Church members knew him as their pastor, and the community knew him as a voice for what was right and justice and fairness for everyone,” Harkins said. “Calvin Butts was always anchored in his faith.”

E.R. Shipp, a professor at Morgan State and Pulitzer Prize Winner at the New York Times, was a law student at Columbia University when she joined Abyssinian. Shipp said even though she doesn’t usually like to attend viewings, she came up from Baltimore and stood outside the tall brick church to see people and hopefully old friends.

“What struck me was how many new faces there were among the ushers, and after a while, some of the oldsters started to come through,” Shipp said. “I saw some of the deacons and deaconess who remembered me.”

“I have known Calvin Butts for at least 40 years, and Abyssinian is still part of my life,” Shipp said. “I didn’t even think about it; it was just natural. He was a model in many ways of what it means to be a committed community activist. He was involved in not just the traditional purview of the church; he was very much involved beyond the doors. He would get to know the people in the street, then pivot and get to know political figures and leaders of corporate America all in service to improve the lives of Black people.”

RELATED: ‘He Gets Us’ in New York City – Ad Campaign Seeks to Disrupt Misconceptions about Jesus

Butts was born in Bridgeport, Connecticut in 1949 and moved to Queens, New York with his family. He later earned a bachelor’s degree in philosophy from Morehouse College in Atlanta, a Master of Divinity degree from New York’s Union Theological Seminary in 1975 and a Doctorate of Ministry in church and public policy from Drew University.

Butts joined Abyssinian during his seminary years. After serving as the church’s youth minister, in 1989, he became the assistant pastor. Butts founded the non-profit Abyssinian Development Corporation, which grew into a multimillion-dollar organization in Harlem with more than $37 million in total revenue.

Butts also taught urban affairs and African studies as an adjunct professor at City College of New York, as well as Black Church history at Fordham University in the Bronx.

In a statement Friday, New York Mayor Eric Adams said Butts mentored him during some of the city’s most challenging moments. “The City has lost a real giant,” Adams said.

In a statement after his death, Rev. Al Sharpton, the Founder and President of the National Action Network (NAN) called Butts “a major pillar in the Harlem community” who is “irreplaceable.”

“We knew each other for more than 40 years, and while we did not always agree, we always came back together,” Sharpton said. “We spoke as late as a couple of weeks ago about this work, as he was still fighting cancer. He will be tremendously missed.”

Butts is survived by Patricia, his wife, three children and six grandchildren.

Senior contributor Hamil Harris is an adjunct professor at the University of Maryland, College Park, and has been a lecturer at Morgan State University. Harris is minister at the Glenarden Church of Christ and a police chaplain. A longtime reporter at The Washington Post, Harris was on the team of Post reporters that published the series “Being a Black Man.” He also was the reporter on the video project that accompanied the series that won two Emmy Awards, the Casey Medal and the Peabody Award. In addition to writing for ReligionUnplugged, Harris contributes to outlets such as The Washington Post, USA Today, The Christian Chronicle and the Washington Informer.